Not only is Maidstone the largest town in Kent it is also the county town. It's name has been recorded over the years as De Maeides Stana, Maegdan Stane, Medestan, Meddestane and Mayndenstan. The current name has been in use since around 1610. The town and the surrounding areas in Maidstone Borough now have a population of around 170,000 people. 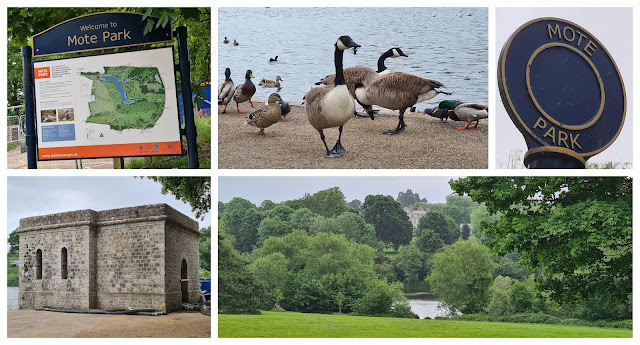 It is home to the 36 Engineer Regiment who are based at Invicta Park Barracks in the north of the town. Maidstone Studios are based locally. It is the largest regional independent TV broadcast facility and many popular television shows were/are filmed here (notably Catchphrase, Supermarket Sweep and Later... with Jools Holland).
To the east of the town centre is Mote Park. This name comes from the Old English word 'Moot' which was used to describe a meeting place or place of assembly. It is thought that Mote Park was an important administrative centre. The land became a large country estate from around the 13th century and it featured one of Kent's earliest deer parks. It was owned by the royal family one more than one occasion. 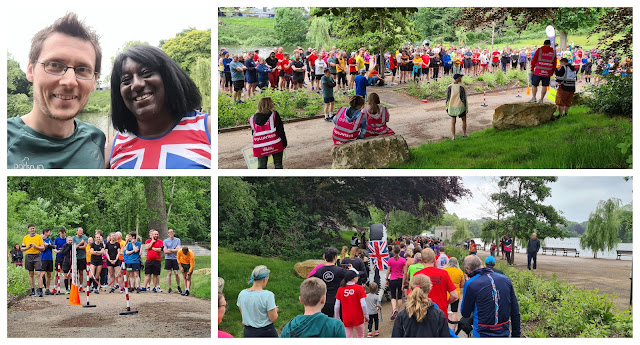 At the centre of the original estate was Mote House - a castellated building set on formal terraces. This building survived until 1793 when it was demolished and a replacement Mote House was constructed on a new site a little further to the north (completed in c.1801). A map dated 1797 suggests there may have been a moat around the building but this doesn't have anything to do with the name of the estate. The River Len flows through the area and this was dammed to form a lake. Adjacent patches of land were gradually acquired and the grounds were landscaped which included the planting of many non-native trees such as Giant Redwoods.
The estate was sold to the First Viscount of Bearsted who went on to found the Royal Dutch Shell oil company - a name that it kept until January 2022 when it changed the name to Shell plc. It eventually ended up in the ownership of Maidstone Borough Council in 1929 where the grounds were remodelled and opened as a public park. At this time the house became an orphanage before subsequently becoming a care home for the disabled. The estate was briefly requisitioned by the British Army during the second world war, the house was used as the officer's mess and the park used for military training activities. 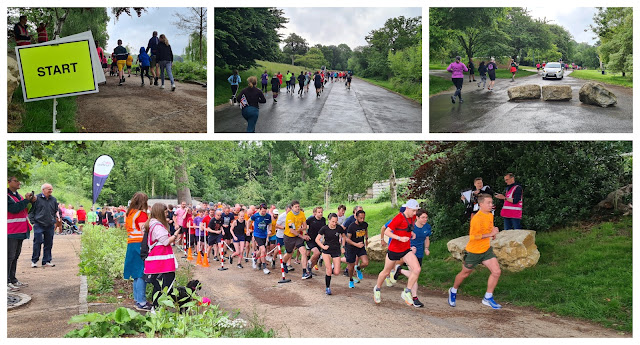 In the post-war years the park was returned to public use and Maidstone Model Engineering Society constructed a model railway track. This is still in use and is usually open to the public on Sundays during the summer. At one time the park had a Tether Car racing track (also known as Cable Racing), in fact it is still there, just no longer in usable condition. The small cars were tethered to a central post and went around a circular track at speeds up to 155mph. The track the last of its kind in the UK when it closed in 1970. There is a video of the Mote Park track from 1967 - check it out on youtube.
The modern-day park covers over 450 acres, and the lake, which is 30 acres, is one of its main features. There is a water sports centre here where activities such as kayaking, canoeing and paddle boarding can be undertaken, or just turn up and hire a swan or dragon pedalo. Elsewhere in the park you'll find children's play areas, BMX track, skate park, sports pitches, and the Mote Park Outdoor Adventure centre which features a 9-hole dinosaur-themed mini golf course 'Dino Golf', a rope walking activity called Sky Trail, climbing wall, and Segway hire. There's also a leisure centre, indoor bowls club and of course acres of beautiful undulating natural parkland. The house was at one point at risk of being demolished, however it was leased by a private company at the last minute and converted into retirement apartments complete with restaurant, bar, fitness facilities and swimming pool. The house and the park were Grade II listed in 2000.

I hear that underneath the park is a network of tunnels which were dug out in order to mine Kentish ragstone - you cannot officially go inside as all the entrances have been sealed but there are some people that seem to find a way in to old mines as their a hobby (check here for some photos). The park is also the official home of the Cygnets Model Boat Club, the club was formed in 1959 and have had exclusive use of a small section of the lake since 1978. You'll also find that throughout the year (but mostly in the summer) the park is used for outdoor music shows and festivals - many famous artists have performed here over the years.
On 4 June 2022 the park became home to its very own free, weekly 5km event called Mote Park parkrun. From what I can see various people had unsuccessfully tried to get a parkrun event in this park over the previous ten years or so, so it is great news that it finally has one. It is long overdue and will hopefully help to take a bit of pressure off of the very well attended original Maidstone parkrun which runs alongside the River Medway in the north of the town. We visited the park in June 2022 and took part in event number 1.

Before visiting be sure to check to that one of the large events hasn't caused a cancellation - the course has been designed to try to avoid this, but there still may be some occasions when the event needs to be cancelled. Upon arrival we parked in the main car park which is in the north-west corner of the park. It's not the only car park within the park (there are two others), but it is the closest one to the parkrun meeting point. The car parks open at 7am and are free-of-charge up until 10am. After 10am there is a £2 charge and this will cover for up-to six hours. Should you be staying beyond 10am, payment can be made with cash or card at the machine or by using the RingGo app.
For anyone arriving by public transport, there is a bus station and three train stations in the town centre, Maidstone East, Maidstone West and Maidstone Barracks. I understand Maidstone East is the only one that runs in and out of London. The onward walk to the park is at least 2km-3km so leave yourself enough time to cover that distance. If arriving by bicycle you'll no doubt find somewhere to secure it, but I didn't actually see any proper cycle racks.

Once in the park you need to head to the north-west corner of the lake to find the parkrun meeting point. During our visit, the main cafe and toilets complex (next to the car park) were undergoing a complete rebuild, so the toilet facilities were located in a portable wagon just outside the construction area. Once the building works have been finished there will be new toilet facilities located there.
The parkrun takes place on an out-and-back route but with a double loop in the middle. I'd never taken part in a parkrun on a course with a configuration quite like this before. It is all on tarmac paths, so road shoes will be fine all year round. It is quite undulating and most people would probably describe it as hilly, so be prepared for that. It's fine for buggy runners, but I don't feel qualified to say how it would be for wheelchair users given the undulating nature of the course. Also please note that it is quite likely that there could be some slow-moving vehicles on part the route.

As I mentioned earlier, the meeting point is at the north-west corner of the lake. It is also right next to the historic boathouse which dates back to around 1800. Once the briefings have taken place the participants head off along the northern side of the lake. Within a few hundred metres the course starts to undulate and this continues on and off throughout the entire 5km.
After a short while the course passes right in front of Mote House itself and the runners and walkers continue all the way to the end of the 'out' section where there is a long stretch with parkrunners running both ways which also features crossing the River Len via an old stone bridge. Interestingly the River Len also forms the moat at the nearby Leeds Castle.

The two loops take place on the way back. What happens is that shortly after passing the house on the return leg the course swings a left and follows the Lakeside Walk path which meanders gently around before coming out back on the out and back section just before the house. Once this loop is performed twice the participants can then continue along the remainder of the 'back' part of the route all the way back to the historic boathouse and a few metres later the finish. I was a little worried that the double loop could lead to lots of people being mixed together at different stages of their parkrun, this certainly did happen but it didn't seem to cause any problems.
Barcode scanning, as always, took place just after the finish and the results were up online a short while afterwards (244 took part). At this stage it is difficult to predict how many might attend every week, but I get the feeling that this will end up being a very well attended event. The new cafe is currently (June 2022) under construction so that looks like it'll be the place to go once it is finished. Until then, there is a food and snack hut next to the car park and playground which can cater for your post-parkrun refreshment needs.
I had used my Garmin to record the GPS data of the course and you can find that on my Strava account should you wish to see the course in more detail. I also used the data to create a course fly-by video using the Relive app on my phone, again you can view that should you wish to get a better visual of the course.

Post-event we had an extended wander around the park, more than doubling the distance we had already covered to a very respectable 12km in total. The undulating nature of the terrain really adds to the park's picturesque status. We found the round Grade II Listed building dating from 1801 called the Volunteers Pavilion. Then we headed back over the lake and found the watersports centre, model railway track and the remains of the tether car racing track.
We also found an Oak tree which commemorates all the men who gave their lives during the second world war. It was grown from an acorn which came from the British War Graves Cemetery in Reichwald Forest, Germany. We finished off sitting next to the lake watching the Cygnets Model Boat Club having a competition which I believe was round 4 of the ICCC. I'm not sure what that means but the boats were incredibly noisy and fast. The kids (and adults) loved watching them. I've just remembered that I haven't mentioned the waterfall - it's a man made water feature and fairly small. It's also quite difficult to see as the plants have been allowed to grow which obscures the view. The parkrun route passes right next to it.

By 1pm we were ready to head off home and we were quite happy with our nice morning out in this interesting and pretty park. The parkrun seemed to go really well, so a big thank you to all the volunteers for putting it on and making us feel so welcome.
Related links:
My GPS course data
The Relive course fly-by video
The Kent parkrun venues
copy7t at 09:09
Share
‹
›
Home
View web version