Maidstone is the largest town in Kent. It is also the county town. Its name has been recorded over the years as De Maeides Stana, Maegdan Stane, Medestan, Meddestane and Mayndenstan. The current name has been in use since around 1610. The town and the surrounding areas in Maidstone Borough now have a population of around 170,000 people. The town itself has been home to several industries over the years, paper, cloth, brewing and stone quarrying being some of the larger ones. 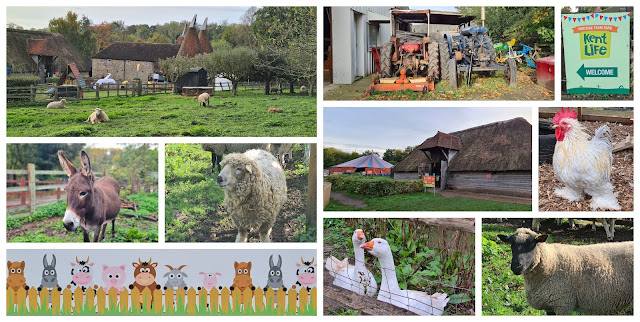 There has been a military presence here since 1798 when Maidstone Barracks was established. The military moved to a new barracks around the time of the second world war and this is known as Invicta Park Barracks. It is home to 36 Engineer Regiment. In 1834 the town was the site of the discovery of the fossilised remains of an Iguanodon. A cast of the discovery can be seen in Maidstone Museum; however, the original can be seen in the National History Museum, in London. The town also has quite an unusual claim to fame; in 1976, NASA named a crater on Mars after the town, it is simply called the Maidstone Crater and it has a diameter of 10km.
At the northern end of the town is a visitor attraction called Kent Life. Its grounds were originally Sandling Farm which was part of the Cobtree Manor Estate. Much of the estate was bequeathed to the people of Maidstone in 1964, when the owner passed away. In 1985 the first iteration of Kent Life opened to the public under its original name 'The Museum of Kent Life'. Original buildings have been restored and many additional historic buildings from across Kent have been bought and rebuilt within the grounds. We have visited a few times and also taken part in workshops with the kids where we learned about bees and turning wool into yarn. It is also one of the few places that grow and process their own hops. In April 2013 Kent Life became the base for Maidstone parkrun. For those unfamiliar with parkrun, it's a free, weekly, timed 5km event open to all abilities, and despite the name, walking is totally fine at all parkrun events worldwide. Maidstone parkrun has a fine, long-standing community of both runners and walkers, so you will be made to feel welcomed no matter what pace you choose to complete the course. I first visited this event in 2014 and had always planned to return at some point. This finally became a reality on 29 October 2022.
The easiest way to reach the event is by car and Kent Life allows parkrunners to use their free-of-charge car park for the duration of their stay. Kent Life sits right next to the M20 and can be reached by exiting at junction 6. The route into Kent Life is marked by some brown tourist attraction signs, but please note that some may still display the previous name 'Museum of Kent Life'. It's also worth pointing out that there is a Premier Inn adjacent to Kent Life, so that could be a very attractive prospect for parkrun tourists visiting from further afield. 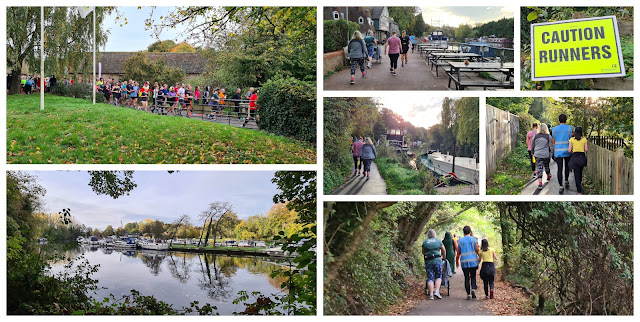 If travelling by public transport, there are three train stations in central Maidstone. The closest to the parkrun is Maidstone Barracks, followed by Maidstone East and finally Maidstone West. Whichever one you alight at the onward journey will be at least 3km. I understand there is a bus that runs from the town centre to Kent Life. However, you could walk by heading in a northerly direction along the towpath which runs alongside the River Medway. The towpath is also a designated cycle route, so that may also be an option for some. There is a bike rack within the main car park at Kent Life.
Once at Kent Life, the main parkrun meeting area is right at the main gate. Should you feel the call of nature, there are toilets available within the grounds of Kent Life before and after the parkrun. The course here at Maidstone parkrun is an out-and-back type of course. The surface underfoot is mostly tarmac, but there are some sections of gravel, so road shoes are usually fine. However, it can get a bit splashy, and in these conditions, I tend to slip on my trail shoes (I have a low threshold for switching). Before the participants are set off, there are two briefings: one for first timers and then a main briefing for everyone. 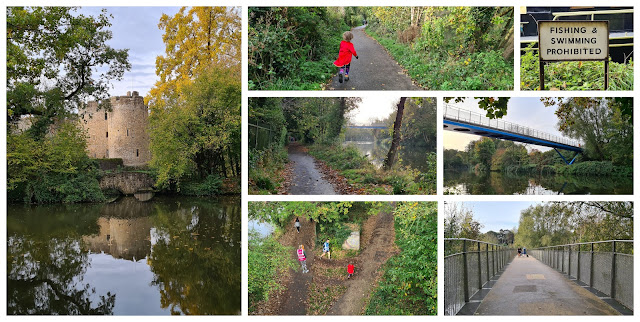 From the main entrance at Kent Life, the course initially heads along Lock Lane where there is a slight drop in elevation, and this leads directly onto the towpath alongside the River Medway. From here everyone turns to the left and heads in a southerly direction towards the centre of Maidstone. It's a pretty, tree lined riverbank and as this section of the river is not tidal, it feels more like a canal. Interestingly the whole course is part of Maidstone River Park, which covers the 12km stretch of the river between Teston Country Park to Aylesford. It was created to celebrate the Millennium and was partly funded by the National Lottery. Progressing along the riverside, you are likely to see plenty of boats moored as this is a popular and scenic spot for this kind of activity.
On my first visit here, I completely failed to spot the fact that there is a castle on the opposite side of the river. To be fair, it is almost completely hidden behind the treeline. It's also not a real castle, but a fortified country house called Allington Castle. It has been passed from family to family over the years but has a claim to fame in that King Henry VIII was a guest on more than one occasion. It is still a private residence which is currently the home of Sir Robert Worcester, who is the founder of the MORI polling company. If you are lucky, you may see a tiny glimpse of it through the trees. 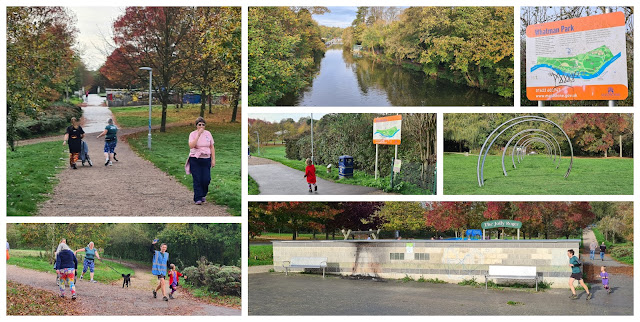 The path is just the width of a regular towpath, but there are a couple of sections where it slims down to single file. As this is an out-and-back course, wherever you are within the field you will certainly have other parkrunners moving towards you at some stage during the event and the rule is to keep left. It is very important to keep an eye out for each other and, of course, for members of the public who may be enjoying a walk along the path. Also remember that it is a cycle path, so keep your eyes peeled for cyclists. There is a point where the course leaves the towpath, zig-zags up and crosses the river via the Downstream Millennium Bridge. I hear that the bridge wobbles when there are lots of parkrunners on it, so be prepared for that.
This takes the parkrunners into Whatman Park. Named after the now-closed Whatman Paper Factory. James Whatman is famed for his role in inventing Wove Paper and the wove wire mesh which is used to mould and align the fibres of pulp. I understand this lead to the large-scale industrialisation of paper making. The park is said the be the centrepiece of the Maidstone River Park, it was once inaccessible land between the river and the railway line but has been redeveloped into a green space for people to enjoy. Keep your eye out for the 60-foot-long double helix (DNA) sculpture. The parkrun course does not stay in the park for long as the route simply does a loop of the Jolly Roger playground and then heads back across the bridge and down onto the towpath to begin to return leg. 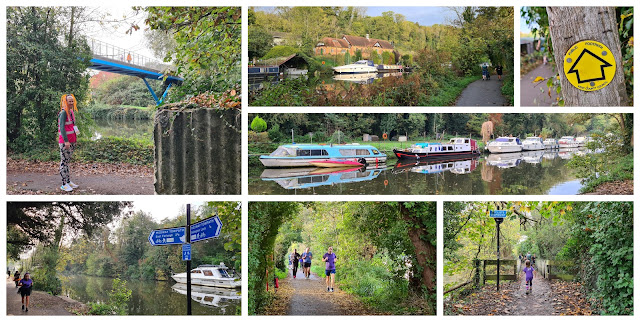 Another thing to keep an eye out for while on the river path is the Allington Marina which was established in 1963 and has 100 moorings. I hear it has been described as England's most beautiful marina and as such those moorings are in incredibly high demand. As the course nears the end of the riverside section, Allington Lock comes into view. The lock sits at the junction of the tidal and non-tidal sections of the River Medway and was originally installed shortly after the Lower Medway Company was founded at the end of the 18th century. The current lock dates from 1939.
The final part of the parkrun course involves returning to Kent Life via the road which is slightly uphill. A marshal is on hand to ensure any moving vehicles stop to allow parkrunners to continue uninterrupted. Then when you reach the start area, the course continues into Kent Life and right around the outer path until it reaches the very end. This last part has the name Howard's Hill, so save enough energy for the incline. To be fair it's not that bad, but it probably catches quite a few first-timers out. 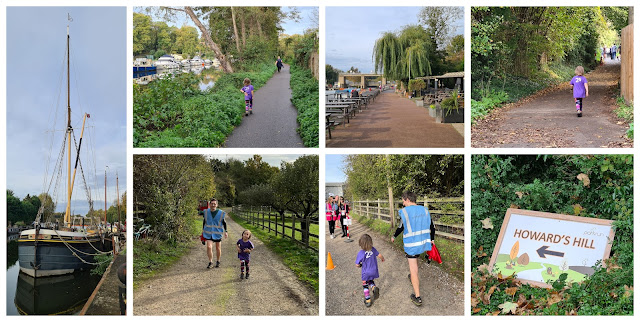 Of course, at the end of the path there is a finish funnel where finishing position tokens are handed out. Barcode scanning takes place immediately after and the wonderful Dotty's Tea Room is waiting to take care of all of your post-parkrun refreshment needs! At this time of the morning, they specialise in bacon or sausage sandwiches, if you want a veggie option you'll need to ask, and they should be able to make a veggie sausage sandwich for you (that's what I had).
I recorded the course using my Garmin and the GPS data can be found on Strava. I then used that data to create a Relive course fly-by video which you can watch on YouTube. 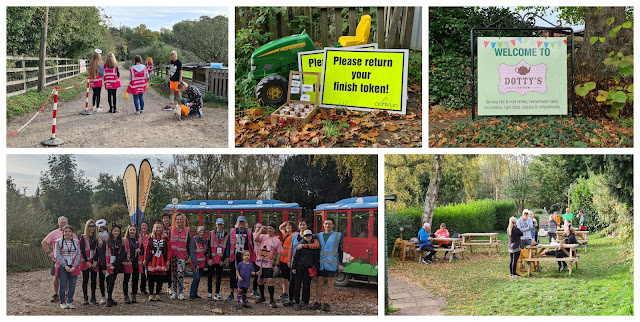 The results for event 432 were processed and online shortly after the tailwalker has crossed the line. 301 people had participated. It was great to see such a large range of finishing times and I was very pleased to see 24 people finishing in over 50 minutes, with a large proportion of those being over the hour. Until the summer of 2022 the average number of attendees had been around the 350 mark, however the opening of Mote Park parkrun (blog7t write-up), in the centre of Maidstone, has certainly helped to take a bit of pressure off of this event.
Our visit coincided with Halloween, and I have to say, I can't imagine a more perfect venue for this. Firstly, the sheer number of parkrunners in costumes was incredible, but on top of that, Kent Life also had their own special Halloween weekend event, so the entire visitor attraction was decorated with skeletons, ghost, pumpkins, and various other spooky items. If you are ever looking for a great Halloween parkrun, go to Maidstone! 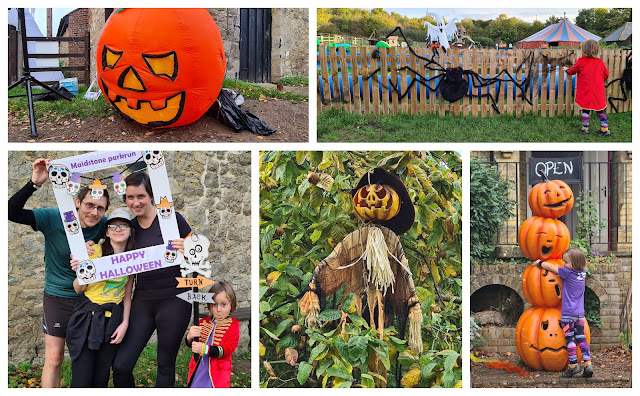 We left with the feeling that we'd had a really special parkrunday. A huge thanks goes to event director Donna and all her wonderful volunteers on the day.
Related links:
My GPS course data (29 October 2022)
The Relive course fly-by video (29 October 2022)
The Kent parkrun venues
My original Maidstone parkrun blog
Mote Park parkrun (blog7t write-up from June 2022)
Posted by copy7t at 13:19