I wasn't supposed to be racing this weekend, but you know how it is... I was browsing the race listings for a 5 mile race as I felt that I was in good shape to improve on my personal best time of 34:49 which I ran at the Isle of Oxney race in 2012 (which has since been renamed the Tenterden 5), came across this one and just entered. It's a mixed terrain, mostly trail, race and not really a pb course, but I still felt that I could beat my previous personal best at the distance. 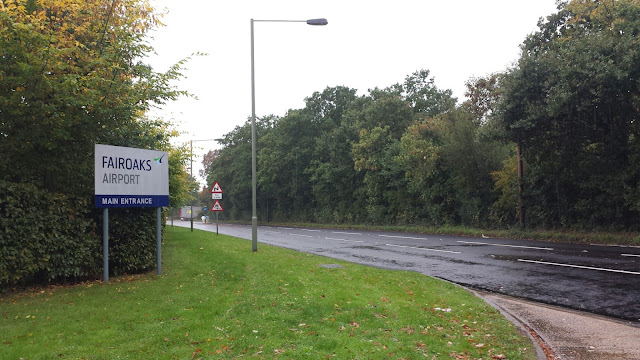 The Fairoaks Five race HQ is at Fairoaks Airport, Chobham, which is near Woking. We (myself and the ladies) jumped in the car and drove half-way round the M25 in the pouring rain and arrived in good time for me to collect my race number and timing chip, and to check out the course map. There was plenty of parking available in the main airport car park and the little one enjoyed checking out the aeroplanes sitting next to the runway. 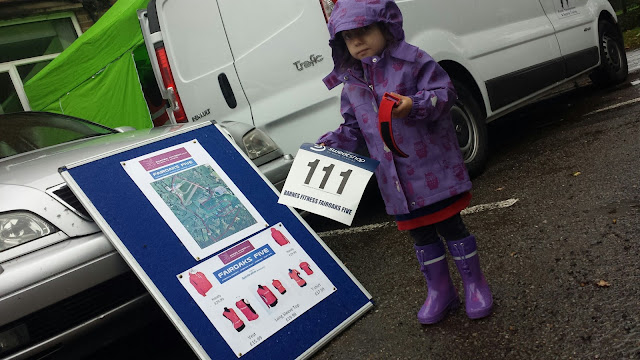 So as race time approached I changed into my running gear and stuck on my water and wind proof jacket to warm up. We then hung around, trying to shelter ourselves from the incessant heavy rain. With just a couple of minutes to go until race start time, I was being indecisive about whether to leave the rain jacket on for the run or whether to whip it off and get on with the job in hand - thankfully, reason won and I took it off and handed it to the wife for safe keeping. 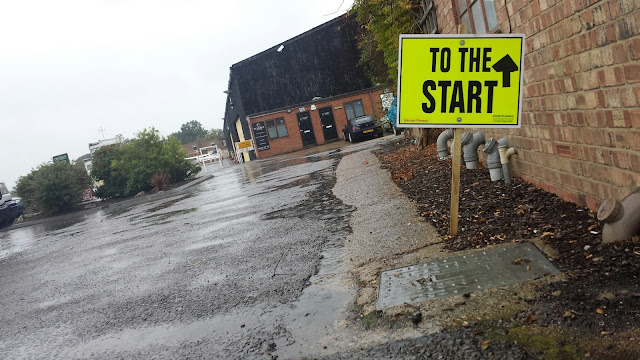 At 10.30am sharp, the already drenched pack of 154 eager runners were sent on their way to run 5 miles around the local woods. The first section was on the gravely, pot-holed path within the airport grounds, before were turned onto the beautifully smooth tarmac of the A319 Chertsey Road. After a short while we were directed to turn right down Bonsey's Lane where after a short while we left the road completely. 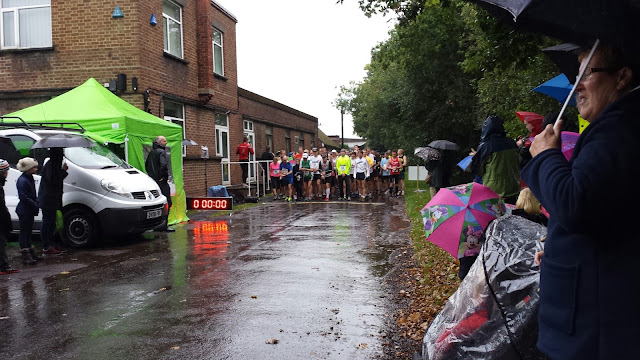 I remember running on a bit of trail through the trees before emerging onto an open grass area at the back of the airport. A few twists and turns later, I caught a glimpse of the Maclaren Technology Centre. This section featured quite a bit of open grass land and undulated a little, but nothing too strenuous. After this, the run was mostly in the woods on a combination of single track trails with protruding tree roots to fairly wide woodland avenues which were glowing in their orange and gold autumn coats. 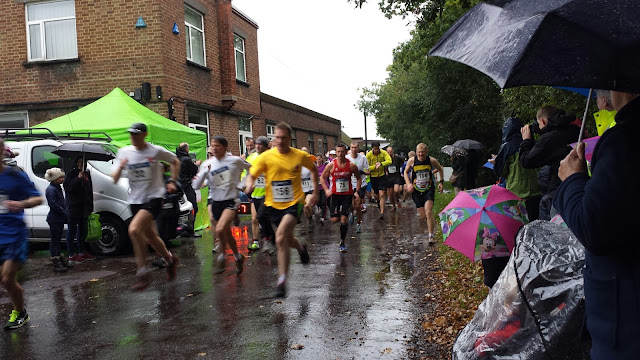 The rain was still bouncing off the ground and had been the whole night before, so every dip and crevice had filled with water, but I managed to keep my feet fairly dry until about half-way around. Somewhere around here the ground was wetter and the puddles too wide too avoid, I was expecting to have water-filled shoes much earlier on, so I wasn't too upset when my shoes finally succumbed to the inevitable. 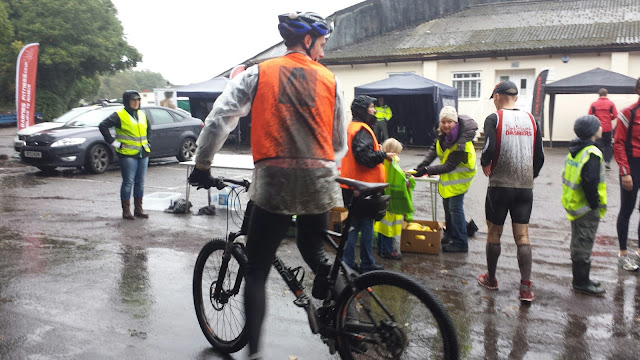 I remember crossing a few small wooden bridges, running past some lakes (or maybe they were huge puddles) and I saw a few horses in adjacent fields throughout the run - the rest was a blur... really it was.. I couldn't really see anything through my glasses as they were so wet, but even with that I still managed to find my way around the course. The signage and marshalling on the course was all very good and I managed to navigate my way through without getting lost, but I did hear that one runner took a wrong turn somewhere and ended up back at race HQ just before the lead bike and winner.


Eventually I popped out of the woods and was back in the grounds of the airport, and after the last stretch on tarmac I crossed the finish line. As you'll see from the video, I just about managed to come in under 34 minutes. My official timing by chip was 33.58 and I finished in 13th position. It was a new personal best so I'm over the moon. However I know that I can still go a bit quicker so I'll be looking out for a 5 mile race with a pb course before the end of the year. 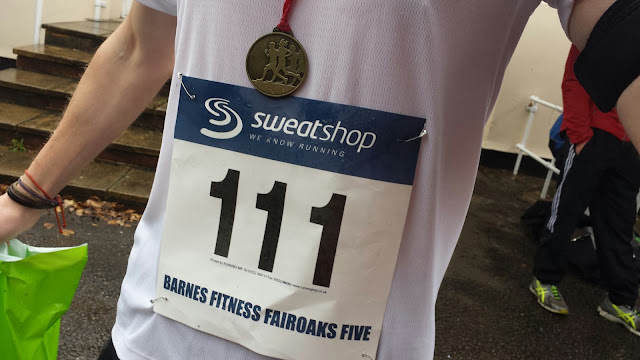 I was promptly handed a banana, my finisher's medal and a goodie bag, which contained some fuelling gels, but the gels contain some funny ingredients and a lot of caffeine - which I'm trying to avoid, so I won't be using them. The main thing was that I really enjoyed running the course. It wasn't until my wife and daughter pointed out the backs of my legs that I realised how muddy I was! 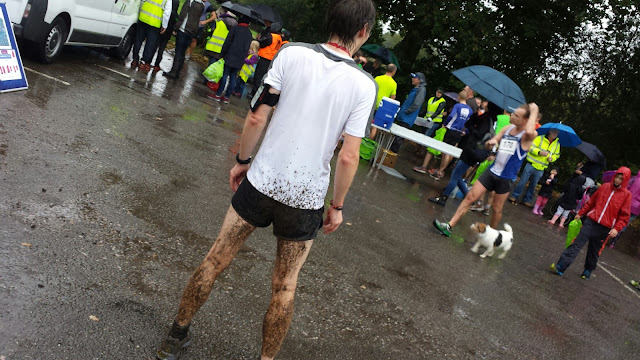 After posing for a couple of photos, we rushed back to the car so I could get out of my dripping wet clothes and into something dryer - luckily I had actually remembered to bring a towel so after a prolonged drying session in the back of the car... 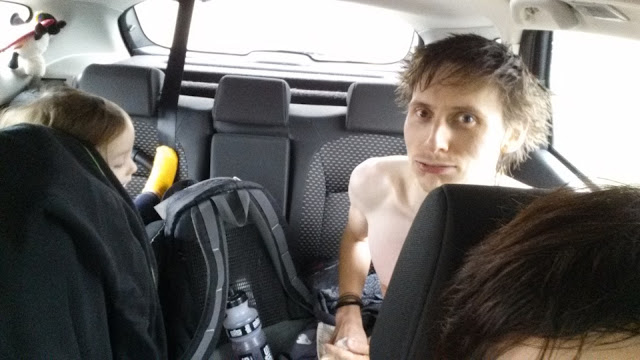 ... I eventually climbed through into the driving seat (I couldn't face going back out in the rain) and we began our journey home, but not before stopping outside the front of the Maclaren Technology Centre to take a few photos and then popping into Woking for some lunch. It was still raining by the way.