I've split the ride into sections based on how I logged it with Strava. I did this because I wasn't sure if my phone battery would cope with such a long ride. In the end it coped admirably with juice left to spare. You can find the GPS data for the individual sections by clicking on the Strava links below.

Mrs7t even got out of bed of early to take a quick snap of me as I was leaving the house. 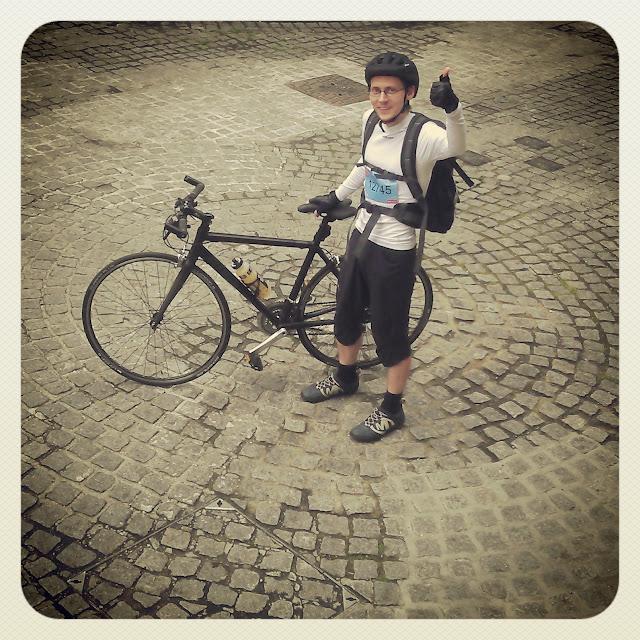 I left Westminster at 6.30am and took a very gentle ride down to Clapham Common to find the official start area. Before the ride started I had time to find the toilets, eat a banana, soak up the atmosphere and then meet up with the rest of Team Downtown.

We were given, as requested, a start time of 7.30am - The good thing at this event is that it's not a strict start time. You can start anytime after your allocated slot. So once we had met up and queued at the start gate, we finally got to the start line at about 7.45am.

We moved quite slowly as the mass of riders worked their way through the pancake-flat streets of South London. The roads here were open as usual to other traffic so our pace was dictated by the traffic. An hour later we had arrived in Carshalton, where we had a quick pit stop.

Once we left Carshalton the riders had started to space out quite a bit so we were able to pick up the pace slightly. The flatness of South London slowly started to give way to some undulating terrain. The first real hill that we encountered was How Lane, the congestion here was unexpected and despite attempting keep my feet of the ground for as long as possible, eventually I had no choice but to walk up the hill - very disappointing because I had been reading about the hills beforehand and was very excited about tackling all of them.


After this we continued on at a better pace. Every now and then the marshals were managing the junctions and it generally worked ok. As a team we mostly stayed together, but every time we hit a hill we would spread out slightly as we each rode at our own comfortable paces. So a little stop was in order every now and then to regroup.

Just after passing the village of Smallfield, we decided it was time for a quick pit stop. We ended this section at the 'First Burstow Scouts' headquarters. The time was somewhere around 11.25am.

We departed Burstow Scouts' headquarters at 11.38 and it was now raining, that's if you can call it rain - it was really just spots of water in the air. In fact, it was quite refreshing. This next section was a gradual uphill drag until hitting Burgess Hill, where it got steeper. Up and up we went until we arrived in the village of Turners Hill - It's a significant psychological point as it is means you have reached the half-way mark. We stopped here, but only to regroup. The road goes downhill out of the village but soon enough you are back into the lower gears as you hit the next incline.


Downhill is the general theme of the rest of this section. At 1.30pm someone in the team decided that we were due a break and the spot that was chosen was either a stroke of genius or just pure luck. We were only about 4 kilometres away from the part of the ride that most people worry about - the Beacon!

The first time you see the South Downs looming in front you of is shortly after Ditchling Common and is an amazing sight. It doesn't take long to reach the point where you are shifting down into the lower gears. The road zig-zags its way up and the gradient switches between steep and very steep every now and then. My GPS data shows the steepest section as being a 30.6% gradient. I'd say that at least 80% of the people I saw on the incline had resorted to walking. Although it was hard work I just kept pushing on, and as I got closer to the top I was rewarded with the most amazing views. Then before I knew it the gradient reduced and I had conquered the Beacon!


At the top almost everybody seems stops for a rest and you have a lot of congestion to deal with. We had agreed to regroup at the top so I pulled onto a bank at the side and kept an eye out for the rest of the team. Finally we all found each other and one of our team members opened a celebratory bottle of beer, from which we all took a well-earned sip!


From here we had 12 kilometres of mostly downhill cycling into Brighton, but four kilometers into that we were stopped and held due to a crash somewhere ahead of us (this wasn't the first crash that had held us up, but it was the most significant - It took us 2hrs and 13 minutes to cover this last 17.6km stretch). We were here for so long that I even saw a spider had started to make a web between two other bicycles. Eventually an ambulance arrived and shortly after we were back on the road to Brighton. The very last section feels like being back in London as you start to encounter heavier traffic and traffic lights again. At around 3.45pm we saw the sea and were directed onto the final straight where the five of us crossed the line together while soaking up the cheers and applause from the hundreds (thousands?) of people that had lined Madeira Drive to welcome the riders.

We were greeted by one of our team member's parents, who had brought with them a home-made celebratory vegan cake - it was delicious. We proceeded to the beach where we kicked off our shoes, had some cake and relaxed in the glorious sunshine.


After an hour, it was time for me to head off on my own to find the coach (and lorry) back to London which I had pre-booked a few weeks earlier. The process was all very simple. I had been given two tickets, one for me and one for the bike. Each lorry can hold enough bikes to cover two coaches full of riders, they put my bike on the lorry, I got on the coach. Two coaches and one lorry drove back to Clapham Common, where my ticket was matched with the ticket on my bike. These coaches run all afternoon and depart as and when they fill up.

Once I had my bike back it was time for the final leg of my day of cycling. The journey to Clapham was 6.8km and the London to Brighton ride came out at 86.2km. I had already ridden further than I ever had before but I was very keen to break the 100km mark. So instead of riding straight back to Westminster I took a little detour and knocked the return leg up to 10.2km, bringing the total number of kilometres up to 103.2km. (I did about 2km more but didn't log it, so 105km is probably more accurate).

I thought the event was really well organised, and there were marshals and official pit stops in all the right places. The main downside is that the event is a victim of its own success - The vast numbers of riders and the inevitable congestion takes the shine off the event slightly. Saying that, I had an amazing day of cycling and I loved doing it as part of a team. I would definitely ride it again in the future, but would try to get the earliest possible start time in the hope of finding the roads a little clearer.

There are more photos from the day. You can view the set on my flickr page.
Posted by copy7t at 01:24