Every year, Marathon talk run a fun little online competition called the Magic Mile. This year I put my name down for it. All you have to do is run a 1 mile time trial and submit your time via the magic mile webpage. You can run the magic mile on your own terms, at one of the events or even create an event for others to join you.

I didn't really do any specific training for this apart from the odd fartlek session, which I would have done anyway. The magic mile had to be run and submitted between Saturday 24 August and Sunday 8 September.

I thought it would make sense to have a few cracks at the mile throughout the two week period, I decided to concentrate on cycling during the first week so didn't manage to put in an attempt so I only had the second week to give it a shot or two or three. My goal was to try to run the 1 mile in under 6 minutes. My previous personal best was 6.10, which I ran at the Westminster Mile event in May 2013.

To time my runs I used the Strava running app on my phone. The advantage of using this app is that it gives a breakdown of the fastest splits over the most common races distances (400 metres, 1 mile, 5k etc) throughout your run. So even if I got the start or end point slightly wrong, the app would still record my fastest 1 mile split as long as I covered the distance, which I did because the runs were always longer than 1 mile in total.

I ran my first effort on the pancake flat Bushy Juniors parkrun course just before the kids were set loose on their 2km run. I used the runningAHEAD website course measuring tool to work out exactly when to start my effort and it worked out that the first 400 metres took me to the exact point where the first path crosses the course, so I jogged up to this point and then changed into my 1 mile time trial pace. 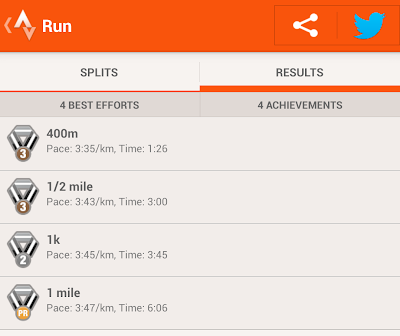 As you can see from the screenshot above, I managed to run a new personal best of 6.06. But as the course is all on grass and is quite bumpy in some sections I thought I might be able to go a bit faster on an all tarmac course.

I also equalled my 2km personal best on the same run.

I jogged 3.5km over to the Trump Street Sweatshop to run with the early bird SRC group at 7.30am. It was a small group and we all ran at an easy pace together for the first half, but during the second half we did an Indian interval session, which was really really good and the first time I had ever run intervals in a group - we did 5k in total.

After the SRC run I had to run along Victoria Embankment to get back to work (3.5k) so used this as an opportunity to do a second Magic Mile time trial. From Blackfriars Bridge right round to the point opposite Horseguards Avenue is exactly a mile and all on tarmac. 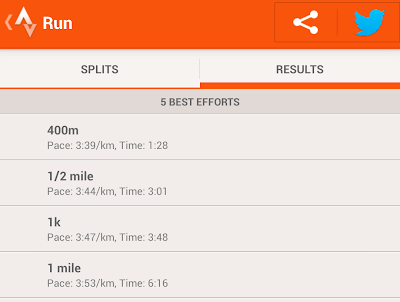 This time I ran 6.16. I have to say that I was really disappointed with this effort. I don't know if it was the session beforehand that wore me out slightly or if I just got my pace completely wrong during the first half (it felt like a strong 5k pace at first, so maybe a tad too slow) or if I slowed down too soon towards the end.

I went along to Southwark parkrun's trial run and as it is a three lap course it gave me an almost perfect 1 mile lap on which to put in attempt number three. I was unsure as to whether I should go for the time on lap 1, 2 or 3. In the end I decided that lap 2 would be good, but as it was such a lovely evening and I was feeling good I ended up dialing straight into a strong 5k pace during the first lap and stuck with it. 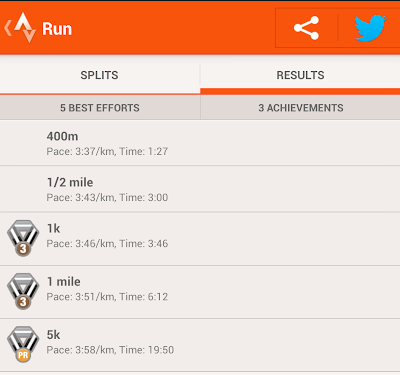 However, even though I changed my focus to a 5k time trial I still managed to knock out a 6.12 mile split during the second lap. So not quite what I came to do but very happy to have somehow pulled a 6.12 mile out of a hard 5k run.

I wasn't thinking about the magic mile at all today, instead I was running another 5k time trial. This time at the inaugural Southwark parkrun. 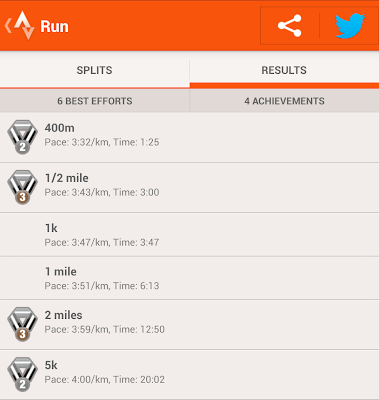 However, I still managed to run a fairly decent 1 mile split of 6.13 as part of the run. So I'm sticking this one in here too. Only 24 hours left before the deadline...

Today was the last day of the magic mile, so I thought I'd stick in one more attempt. I decided to use the same 1 mile stretch along the river that I used in attempt 2. I took a longer route around the Southbank to make sure I was warmed up nicely and then I turned off of Blackfriars Bridge and met the first obstacle - I was running into a headwind!! Typical, I thought.

Anyway I pressed on, dodging the tourists out for an early morning stroll. When I reached the Embankment tube station I was forced to divert into the road as the pavement was completely blocked by a coachload of more tourists. 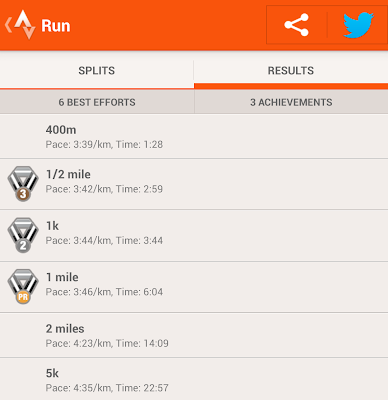 As you can see from the app screenshot, even with the aforementioned obstacles I ran a new personal best for the mile of 6.04 - So I am of course very happy with that!

It leaves me wondering - if it wasn't for the headwind and the weaving around tourists could I have gone a few seconds faster and maybe even have broken the 6 minute mark? For now I'll leave the question unanswered because I need a break from this intensity of running.

I've really enjoyed the magic mile challenge - I think I might even drop a 1 mile time trial into my training every now and then. As to how to run a 1 mile, I think I still need to practice some more because I feel like I should be able to run it faster than I have done so this week. Doing some specific training for the distance would help, so I'll make a note for next year!