The National Lottery Anniversary Run 2013 was the first public event to take place in the Olympic/Paralympic stadium since the end of the 2012 London Games. I had applied to take place in the original 5 mile run which took place in 2012 but was unsuccessful in the ballot. When I heard that the event was being repeated in 2013 I jumped at the chance to run it. So I went onto the website expecting to have to enter another ballot, but to my surprise there wasn't one - so I simply just signed up! 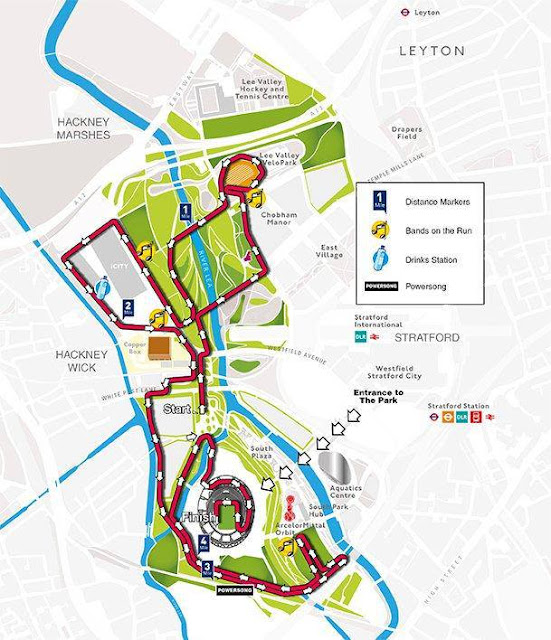 Just over a week before the big day the race pack was sent out which contained an information booklet, race number (with timing chip built in), baggage tag, two spectator wristbands and the commemorative tech t-shirt to wear on the day.

The gates to the Olympic Park opened at 7.30am but we didn't arrive quite that early. Instead we took the Jubilee line from Westminster at about 8ish and felt quite at home as the train slowly filled with #tnlar runners and their supporters. We arrived at the main gates pretty much bang on 9am. 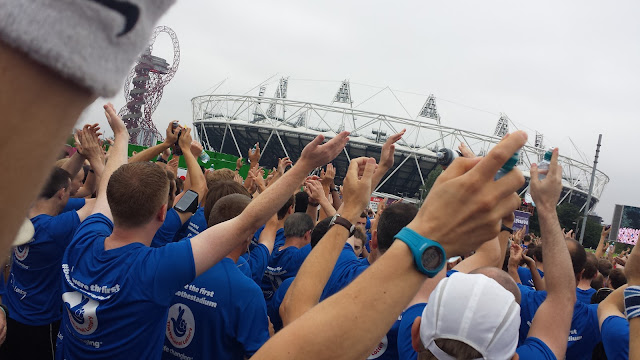 We passed quickly through the security point which consisted of a bag search and a quick check of the wristbands and race number. We found our designated seating area within the stadium (also our meeting post-race meeting point) and then made our way over to the start area. I had been put into the red starting zone so about twenty minutes before race time I entered the runners only area and waited patiently. There was a mass warm-up session but I just took a few photos instead of taking part.

My supporters (the ladies) headed straight back over to the stadium to watch the race on the big screen. 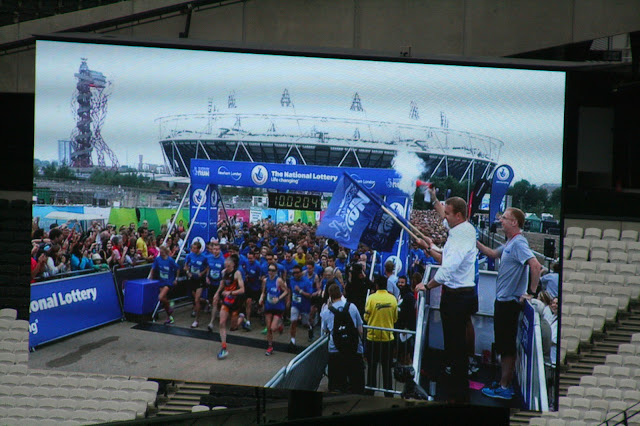 The red zone race start time was scheduled for 10am and after a slight delay Chris Hoy sounded the Klaxon and off we went, or should I say off went those right at the front. As usual with these larger events, most runners experience a delay in starting and it took just over two minutes before I reached the start line.

With the race underway I made my way through the Queen Elizabeth Olympic Park with the other 12,499 runners - It's by far the biggest event I've ever taken part in and it reminds me why I tend to stick to smaller events. The sheer number of people trying to run around the course meant that inevitably the route was quite heavily congested, with the first mile or so being the worst. 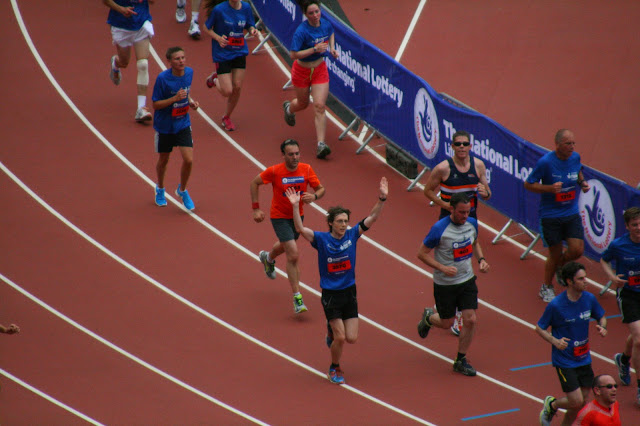 The route took us around the Olympic park, and it was a strange experience. It seems that most of the buildings in the Olympic park are undergoing some kind of building works so it felt like we were running through a building site. And because we were on private property there were no supporters out on the course. Every now and then there were musicians playing for us, which was nice. I remember the steel drums near the velopark and some louder warrior-type drummers somewhere nearer the end, which gave me a nice boost.

As I passed the 4 mile mark the thoughts of building sites and construction vehicles disappeared and were replaced by the anticipation of knowing that I'd soon be running on the track inside the Olympic stadium! The route took us down into the secret parts inside the stadium (a long corridor/service road that follows the curve of the stand above) where I'm sure I wasn't the only runner to be disappointed at losing the GPS signal! We ran inside for a few minutes before finally emerging in the stadium to complete the last 300 metres. 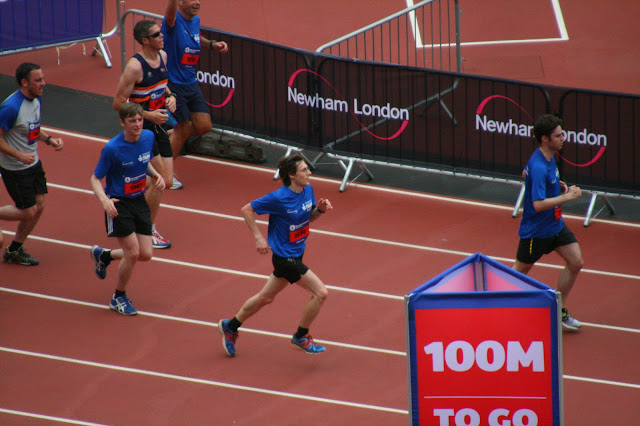 Somehow my wife, who was in the upper part of the stand, managed to identify me amongst the sea of blue #backtothestadium t-shirts as I came into the stadium and took the photos you see of me on the track. This was quite fortunate as the official photographers seem to have missed me completely (not a problem, I wouldn't have paid the prices for an official photo anyway).

Once over the finish line the runners then filtered back into the service road under the stands to collect a goodie bag and then filtered back out into the park to reunite with their supporters. I headed into the red P-T seating area to meet the ladies and we sat there listening to the live music and watched the seemingly endless stream of runners enter the stadium.

The race had its fair share of pros and cons;

Overall the negative points were outweighed by the positives and I would go back and run it again. As time goes by the building site appearance will probably be sorted, the t-shirt issue should never really have occurred - there should have been separate options for men and women and an extra small mans size would have eliminated one of my issues. Maybe a supplier with higher quality shirts would have been a good idea. 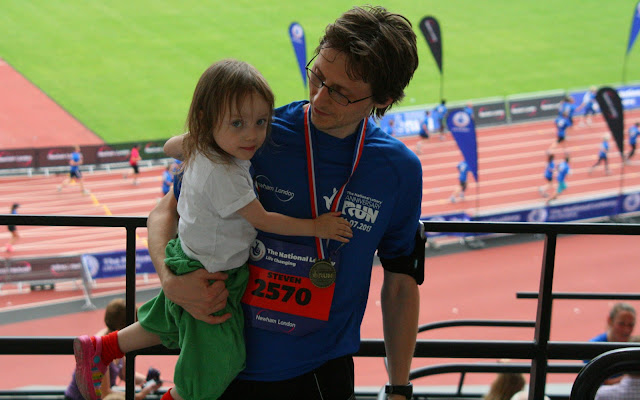 I haven't really run that much since January so I kept well within my limits and just enjoyed the course. I thought I'd aim to be just under 40 minutes and that's what happened. I finished in a fairly comfortable time of 38:46.

Anyway, we all had a lovely day out. It was great to go #backtothestadium and the little lady in the photo above keeps asking if she can go back again!