I'm pretty sure that the Vigo Runners' Valentine's 10ish Mile Challenge, branded 'tough love' this year, only exists to give the masochistic runners of Kent something to do in the middle of February. I first sampled the delights of this race in 2014 - it was ridiculously hard and left me in pieces (for the record, this course takes around 15-30 minutes longer to complete than a regular, flat 10 mile road race). A few years passed and by the time of the 2017 race, the memories of the terrors that lurked within this stunning area of Kent had faded and I quite fancied giving it another go.

I had added the event into my calendar quite a few months before that date of the race, but hadn't actually submitted an entry. Had I done so in advance, I would have paid the £17 affiliated runner entry fee (unaffiliated runners paid £19 in advance). My long-term knee injury had been playing up so I didn't want to pay the money and then have a DNS. In the end it was feeling ok, so I drove down to Vigo Rugby Club with my wife and daughter and entered on-the-day. This cost me £25 which felt a little on the expensive side for a small, local race.

The race started at 10.30am sharp, and three-quarters of a lap of the Vigo Rugby Club playing fields later the course headed off into the woods and the runners could really get stuck into the delights of this brutal, but awesome course. Something that I noticed early-on was that the course this year was slightly different to the version I ran three years earlier - a subject that I'll cover in more detail as we go on.

The course is run mostly on trail paths and through fields (mostly full of mud), but there are a few sections that use roads and other hard paths, which means that the perfect shoes for this are trail shoes. The first few kilometres were a little congested on the narrow forest paths, but somewhere around the two kilometre point, I had settled into a decent pace and was pleased to have found a friendly group to run with.

We continued at a strong but comfortable pace, enjoying and grimacing as we encountered the various ups and downs the course throws at you. Just before the 7 kilometre point, I noticed we had turned onto a road I did not remember from 2014 - it was all uphill. Footstep after footstep we all plodded on. The hill went on and on for a full kilometre and according to my GPS data, the gradient ranged from around 10% through to 27%. I even had to slow down and walk just before the summit.

Turning back onto a trail path, we were immediately sent right back downhill. The trail path here was extremely uneven - I flew down the path and past the half-way point, completely out of control. To be honest, I still have no idea how I managed to stay upright. I tried to slow down, but I just couldn't - this continued for a full kilometre until I finally reached the bottom.

At this point we joined the Pilgrims' Way, which is an ancient footpath that runs between Winchester and the Shrine of Thomas Becket, in Canterbury. Our little group had started to fragment and I headed off on the tail of another runner. The section of the Pilgrim's Way that was used during the race is five kilometres in length and undulates continuously the whole way. Thirteen-and-a-bit kilometres into the race, the course left the Pilgrims' Way, and this marked the beginning of the end of the race.

The headline feature of the race is the almost vertical climb which awaits the runners at the 15.8 kilometre point. However, the detail that seems to get overlooked is that the incline actually starts over a kilometre earlier at the 14.5 kilometre point, so by the time the runners finally reach the bottom of Mount Vigo, they are already broken - or at least I was.

According to a Strava segment, in 2014, I managed to walk and crawl my way to the top in 2 minutes and 33 seconds, but this time around, the grass seemed to be more slippery and I just could get any traction. So again, I walked, crawled and even stumbled my way to the top, but it took me almost a full minute longer to complete the climb. It was nice to see my wife and daughter waiting for me at the top and they took a few photos of me suffering. As soon as I passed them, I had to negotiate the steps that go into the woods - I was truly broken at this point and was questioning whether I would actually be able to start running again. 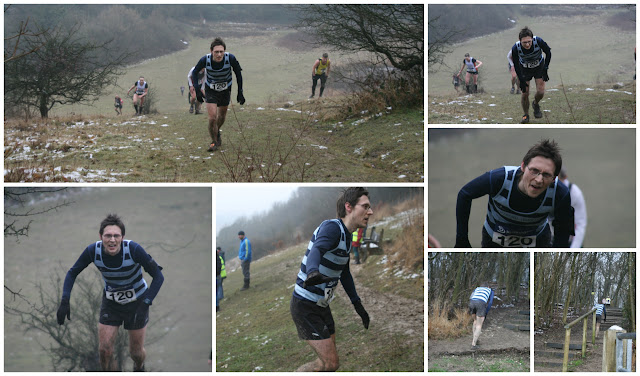 I managed to get my legs moving, but could only run at a relatively slow pace. A few other runners caught and passed me, and I just had nothing left to even consider trying to take back the positions. The final section was a little different to the 2014 course. Instead of going out onto the main road, the course went back through the woods, which was much more pleasant than the roads the course used in 2014.

A few minutes later, the rugby fields appeared and the finish line was soon in sight. The race director was on the microphone and was introducing the runners to the crowd as they came stumbling over the line. 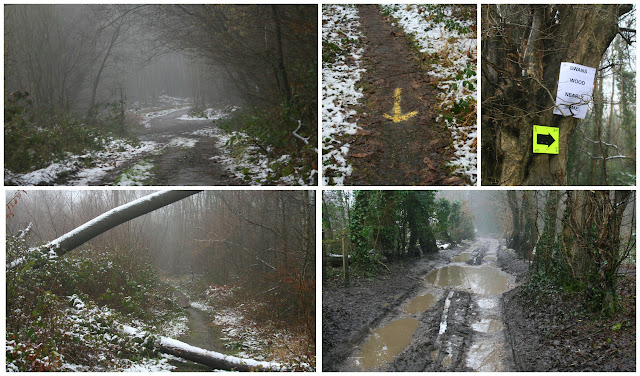 I had my timing chip removed, a medal placed over my head and a goody bag thrust upon me and before I knew it, I was rummaging through the bag looking for something to eat. I also grabbed some water and a banana from a table next to the finish line. I was totally exhausted and started to sense that I needed to get out of the cold, so I went into the Rugby Club clubhouse and collapsed into a chair. I chatted to a few of the runners that I had run with throughout the race and we were all in agreement that it was a fantastic experience. 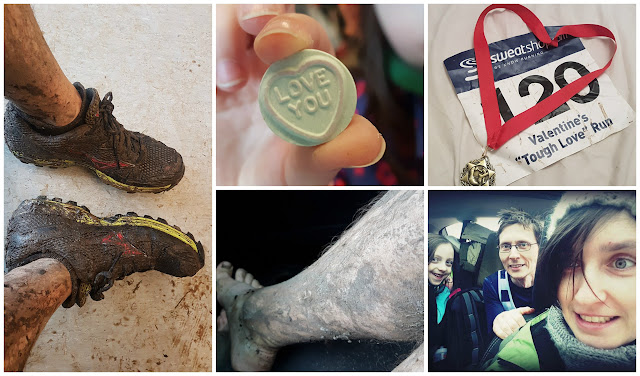 I finished the race in 1.26.15 which was almost 2 minutes slower than my previous outing here. However, the revised course was longer and tougher (343m of elevation vs 315m back in 2014). My GPS recorded the new course as 300 metres longer than the old one (it came out as 17.1km / 10.6 miles in total), so on balance it looks like this was actually a better performance than 2014, and that is quite encouraging going forward. I finished in 18th position (16th male) out of a field of 147. The full results were published online and can be found here - Vigo Valentine 10ish Mile Race.