Way back at the start of the year, I received a pair of New Balance Minimus Trail shoes (MT10) to review - for the record the shoes were provided free of charge and I can confirm that the views here are purely my own.

I have had an injury that has prevented me from running for the last few months so haven't had the opportunity to really test them out. In the meantime I have been wearing them instead of my normal trainers to see how they feel in everyday life.

I'm not completely new to the world of minimal running shoes. I currently have the road version of the New Balance minimus shoe (MR10) and also the Nike Free 3.0 V3. The MT10's are the first minimal trail shoe that I have tried. Usually on trail runs I use my Adidas Kanadia TR3 shoes. 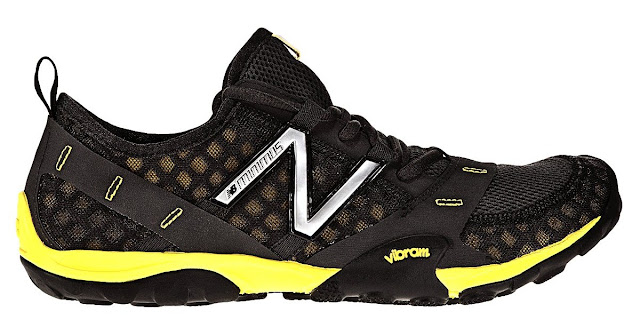 I've always liked the appearance of the MT10s and I was happy to open the box and find the colour scheme was (as above) black and yellow. If was buying these this is the exact combo I would have chosen. They feel very light (201 grams / 7oz.) and they have a 4mm heel to toe drop.

The upper has a slight stretchiness about it which helps the shoe to fit like a glove around the rear and middle areas. The toe box is slightly wider and gives my toes plenty of space to move. The one part of the upper that seems to attract a lot of attention in other reviews is the piece of rubber that goes across the forefoot. Some reviewers have reported that this section is too tight. My feeling on this is that yes, it is certainly noticeable and with thicker socks I would say it is tight. I have found the comfort level is much better if I wear a thin pair of socks with them - for the record I haven't gone as far as going sock-less because it's not something that appeals to me. After wearing them a few times it does seem less noticeable and I find the shoes really comfortable.

As you'd expect from a minimal sole (made by Vibram), it is much thinner than a normal run-of-the-mill running shoe. The tread pattern is a lot less agressive than my only other pair of trail shoes (Adidas Kanadia TR3). This doesn't mean that they won't perform as well once I get onto the muddy and stony terrain at a few different parkrun courses to test them properly.

My initial feelings on the shoe are that I like it. I've been wearing them around the centre of London - so not quite on their intended terrain, but they are very comfortable - sometimes when I get home I just leave them on because I can't bear to take them off. I hope that I'm nearing the end of my break from running so I will hopefully be able to let you know how they feel during a run soon. 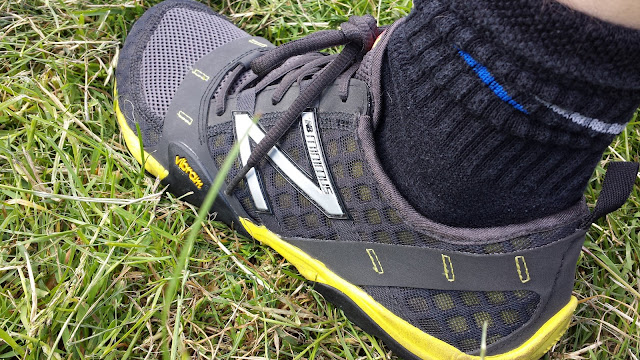 After finally running in the shoes I can report that they performed well and I certainly noticed the difference to wearing my other trail shoes - The minimal sole made me much more aware of the variations in the surface underfoot. I ran on an all-grass/dirt path route, and as the weather had been dry the ground was firm. The piece of rubber across the forefoot did not cause me any discomfort, so that is good news.

I think the choice to run in a pair of shoes like these ultimately comes down to what the individual runner wants out of their footwear. If you are looking for better ground feel than a standard shoe but still want a certain amount of protection from objects that could hurt your foot these should certainly be on your list of shoes to try. I'm still on the fence about whether I prefer minimal shoes or those with more cushioning.

I'll continue to wear these shoes when I run off-road and hopefully I'll come across some muddier conditions at some point in the next few months.

(there may be another update once I find the muddy conditions)
Posted by copy7t at 09:36