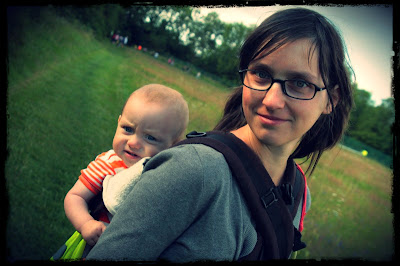 Official photographer and Lime
We had a chat to a few of the regular volunteers and runners (including a fellow twitterer). It's really nice to talk about running without seeing people's eyes glaze over! After that the race director persuaded me to write the official race report for next week, I'm a little worried but she assures me that only 14 people read it anyway!

So, after coming up with a plan to try to run a negative split this week, I placed myself near the front of the pack and upon hearing the word 'GO' bolted like uhm... a thing that bolts.. (I think it's called an Usain). A quick glance at my stopwatch at around the 1km mark told me that I had indeed done the same thing as the last couple of weeks. I knew I'd be in for some serious pain during the second half (again)!

...and they're off!
I'd say that I enjoyed pretty much the whole of the first 2 kilometres, and at that point I would have been much happier if this was a 2km race rather than 5! The lactic acid build up pretty much controlled my pace from that point onwards - All I did was select the effort level and let my body take care of the speed it would let me travel at.

This wasn't a week for smiling or doing aeroplanes for the camera - sorry Dani! I did try to thank, or at least acknowledge, the marshals as I passed them - The volunteers do a great job, I promise that I'll do my bit soon. I was thinking about volunteering when I have a race the following day. My next ones are in September. 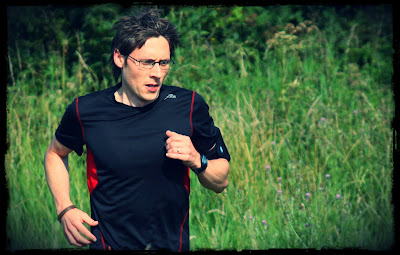 Trying to manage the pain..
It find it interesting to think back to what goes through my head while in this zone. It starts with fairly gentle thoughts like 'this is hard work, keep it up', then they seem to drift into 'why am I doing this?' and then it moves on to a voice that is shouting things like 'THIS IS STUPID, STOP STOP STOP!!!'.

Thankfully I somehow managed to ignore the shouting and reassured myself that it would all be over within just a few minutes. Then before I knew it I saw the yellow sign pointing towards the finish line. With the start-fast-and-hang-on strategy it doesn't leave any energy in the tank to sprint down the finish straight. I pushed as hard as possible, I even managed to avoid crashing into a man walking his dog before crossing the line. I was given my position barcode but had trouble grasping what it was (I would have preferred cake), I think I dropped it - I was in a daze. 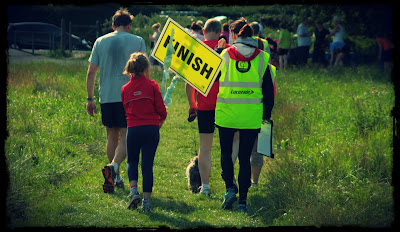 All over, time for breakfast.
And another week's racing was over. Here are my stats..
I am actually really shocked at my time this week. The reason is that last week I set a new personal best of 20:19 and that was giving it everything I had. I thought I had reached the point where I would be chipping away at my personal best, maybe knocking off a few seconds here and there but not anything significant. But this week I knocked 39 seconds off of that time, I don't quite understand how it was possible to do this. I'll try to not think about it too much and just enjoy that I have run sub-20. This also means that I have to cross 'to run a sub-20 5k' off of my running goals list . I just have to decide whether to replace it with 'run a sub-19:30 5k' or 'run a sub-19 5k' - It's a tough decision! (Update: I decided to stick with full minutes).

Have a good week and I'll see you next Saturday!

And last but not least - Dani, Thanks for the photos and your patience. Shameless plug - Not that she needs it.

Steve (or some form of 7t in the interweb land).