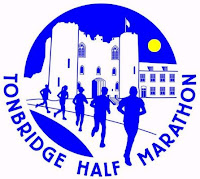 I promise that this will be the last Tonbridge Half-Marathon 2011 related blog post. I just had these notes floating around and wanted to stick them on the blog.

Observations during the race:

During the race a Father and Son went past me on their bicycles. The boy said to his Father 'why are there so many people running down the road?'. I didn't catch the answer but the question alone made me smile!

I almost got hit by a falling acorn, it made an almighty sound when it landed on the floor.

One of the hills near the end was so steep that I'm sure walking would have been faster.

I was so hot at some points that I had to pull my shirt up to let in some cooler air. The race number doesn't help, it blocks most of the ventilation on the front of the t-shirt.

I usually run with the music of John Martyn on my headphones. He was still there even though the headphones were not.

Throughout the race me and another runner kept changing places, and it went on for ages. He would be faster on the hills and I would pass him back on the flat. The very last section was flat, I finished a minute ahead of him.

Leigh is quite a pretty little village. I had never been through it before.

Some people on bikes were trying to cross the road at one point. They almost blocked the entire road. I wasn't going to stop, fortunately they gave way.

Just before a particularly steep hill a spectator shouted out something about it being a hill of doom, or hill of terror, or something similar. They were right.

The water stations were all manned by children, they were really enthusiastic, I remember the last station I passed a lad shouted out 'you're doing well, not far to go' - It really helped.

When we passed a gathering of people cheering, I noticed that my pace quickened.

After the race someone that looked like a marshal asked me and the wife where the toilets were.

On the results page I spotted that the guy in his 60's that gave me a good thrashing at Riddlesdown parkrun was also running, he was three minutes faster than me.

When I saw the last placed runner (I was at 16k, he was at 5k approx) there was a car behind him, I assume it was back-marking. It looked like an F1 safety car.

When I was picking up water from the table at the end of the race some of the cups were empty. I thought someone was playing a cruel trick on me.

Right after the race I swore that I would never enter a half-marathon again. I'm now considering entering the Paddock Wood half next April.