off road cycling at Penshurst (porc)

Just after 9am on the morning after Matilda's second birthday, myself and Michael (my brother) went out for a bike ride. The plan was to go to the Penshurst off road cycling (porc) centre and have a little go on their tracks.

Before starting out we went to Tonbridge castle to pick up the leaflet (containing a map) of cycle route 12.

We made our way through the park in Tonbridge and along past Barden lake. After this the route goes onto the road for a few minutes before reaching what I think is the best part of the route. 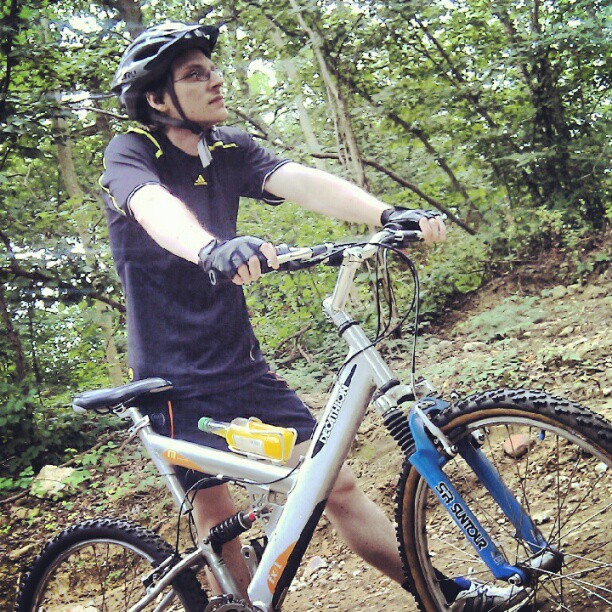 Almost two kilometres of compacted dirt cycle paths with no people or dogs to avoid (on that day at least). Defintely the most fun section. After this there is a very short on-road section before you leave the road and have to negotiate the only significant hill on the route. To be fair you are rewarded with brilliant views from the top.

You then drop down a steep descent and arrive at the main entrance to Penshurst place before going into the centre of Penshurst - which really is tiny, there is a pub, some houses, a church, and a very small shop/petrol station (they have one petrol pump and they fill the car up for you).

The route so far was 11km (including a point where we started to go the wrong way but then turned back). I stopped my GPS tracking and we grabbed a drink and snack in the shop, sat and rested before continuing onto porc.

Once at porc we found a small kiosk type building, paid our £5 entry fee and after a short rest proceeded to explore the main (but unfinished) track viewing building. We then took a look at some of the tracks. 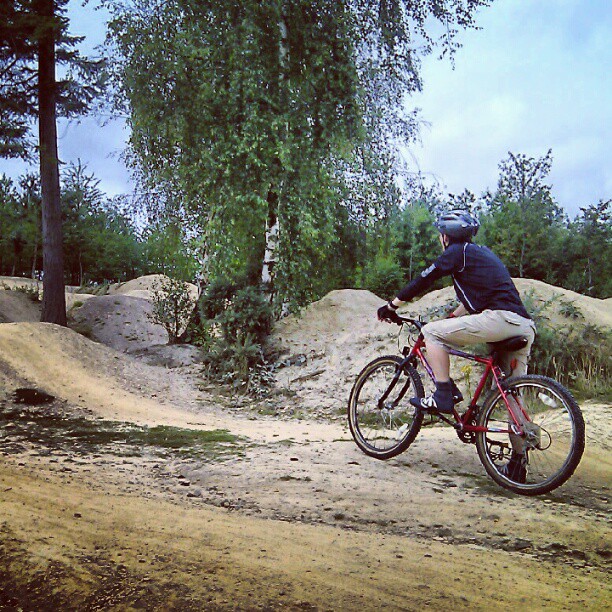 We first went down a gravel track which looped at the bottom and brought us back to the start, we saw a grassy track that looked better, but we would save until later. Next we decided to try out one of the more advanced tracks - this one had jumps and although we had no intention of actually jumping, thought it would be fun to at least have a taster.

We went to the top of the start ramp. Michael went down first, over the first jump and circled round and back to the ramp. Then I went down, over the first jump and the second before looping back. Next we decided to both go out together and explore the track further. Again Michael went down the ramp first, but just as I was about to join him I heard some other riders shouting 'are you alright, mate?'... I headed down the track only to find Michael in a ditch between the entry and exit ramps of a jump. He had dust all over his t-shirt, helmet and face, and his bike was upside down. 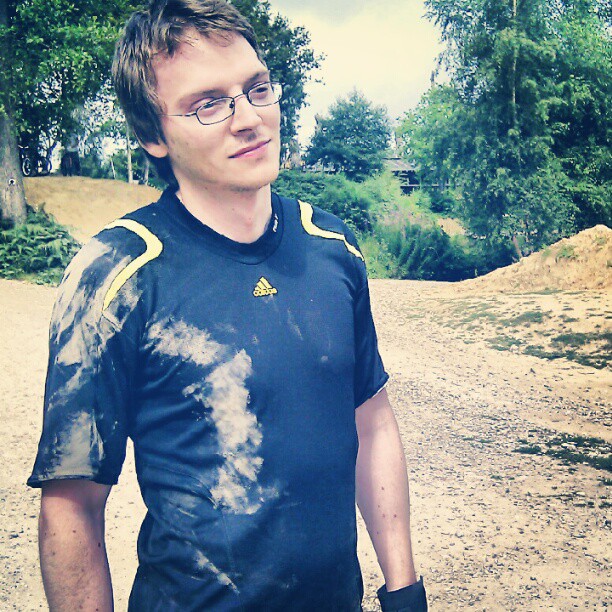 He had hurt both his shoulders, his hand, plus his groin had taken a bashing from the bike frame. We picked up his things, had a brief rest and continued down the track. It was full of pretty spectacular jumps and crazy downhills. We slowly edged our way down further until we found ourselves on a grassy stretch of track. All was fine until I got stuck in a puddle of mud. We circled round and found that it was the same one path we had spotted earlier. We then walked the bikes back up to the top. 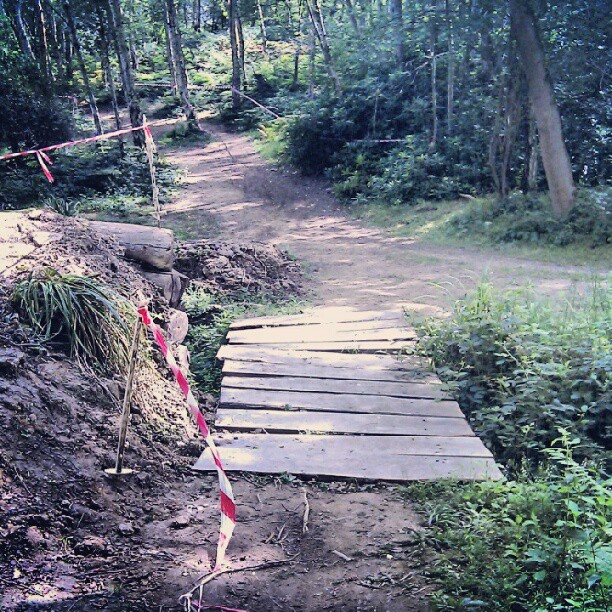 By now we had been in porc for quite a while and were satisfied that we had done what we came to do, so we decided to head home but by going via the grassy track. We found it and went round, we got lost and found ourselves using google maps and gps, then plotted the route to the exit. Again this was down the grassy track. 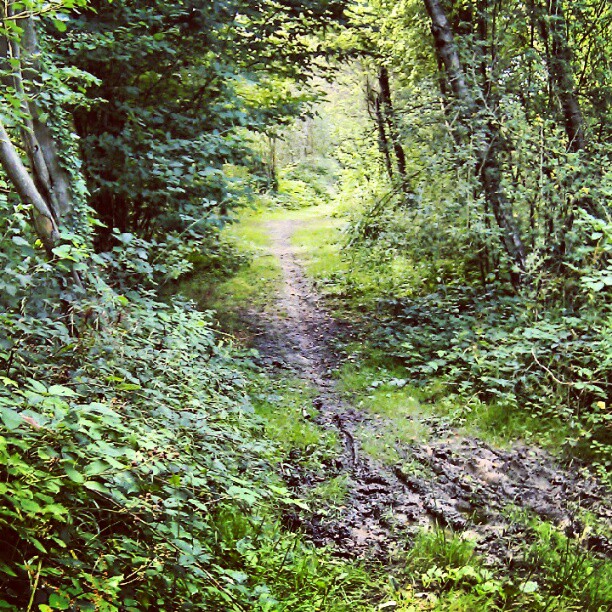 I went first and had soon picked up some good speed and was enjoying the ride, we continued downwards on a track that I recognised from earlier and then I spotted another puddle of mud - this one was bigger and stickier than my last encounter - I tried to slow down but the momentum was just too much for the brakes to handle and I ploughed straight into the muddy puddle. There was no way that the bike would make it through and as the wheel entered the mud I was flung off, straight through a bramble bush (which I felt ripping the skin on my leg), did a couple of rolls and jumped straight back up onto my feet.

The initial pain was in my right leg but this soon disappeared. Then I felt some pain in my left hand/thumb/wrist area. My right leg was cut and bleeding slightly as was my right arm. Michael drew up beside me (somehow avoiding being thrown off as he reached the mud) to see if I was ok. 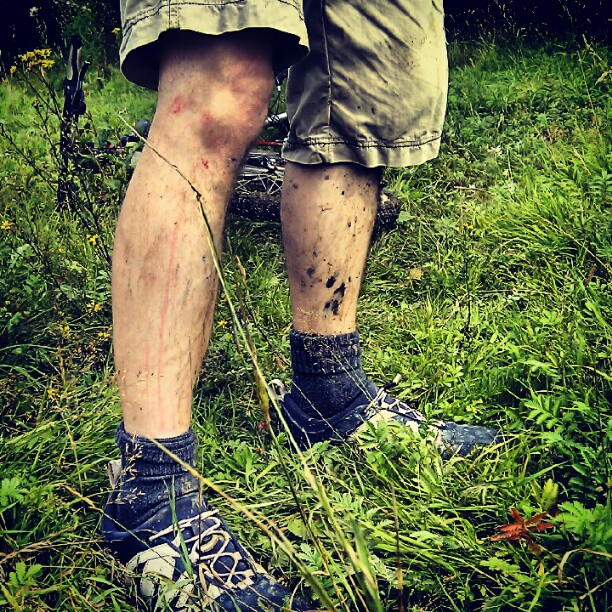 After a brief recovery period we decided that we needed to continue to the exit. I checked google maps again and found that we were not quite where we were supposed to be, so we headed into a clearing and could hear traffic on the adjacent road. Michael walked over and found a gate onto the road. We wheeled the bikes through what was probably someone's farm land and then through the gate, where we picked up the road back into Penshurst.

Before heading back on the cycle route to Tonbridge, we stopped in the little garage/shop, picked up some refreshments and sat there in the sun.

We were soon back on the cycle path, although with our injuries we were a lot slower. Every time I rode over a bump my left hand was in agony, so I rode most of the way one-handed. Michael's shoulder was hurting quite a bit too. 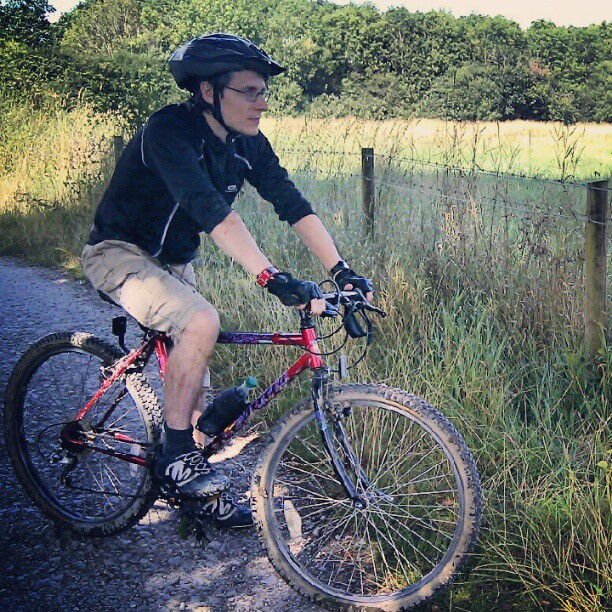 Still, I was looking forward to my favourite stretch of the cycle path and I have decided that in the future this is the type of off road cycling that I prefer.

By 3pm we were back in Tonbridge, both of us in pain but glad that we had experienced some off road cycling.

I logged some of the ride with my gps tracking app. The journey between Tonbridge and porc was around 14km each way (not including our wrong turn on the way there) and we must have covered around 10km within porc. My estimate for the total mileage covered is around 40km.