When I first registered with parkrun, I put Bromley parkrun down as my home venue thinking that I would end up there more often than not. But after a couple of trips to Banstead Woods and then switching my home run to Riddlesdown, I never did get around to visiting Bromley. So after 111 runs over 41 other venues, I thought it was about time I tried out the course. 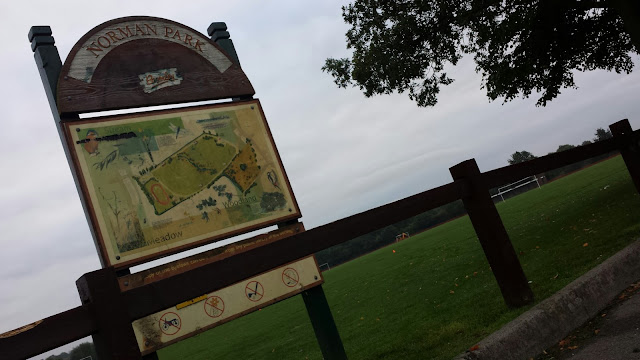 It's not the first time I have been scheduled to run here, but for some reason something else always came up and changed my plans at the last minute - Not this time! I had my supporters with me so we jumped in the car and worked our way through South East London until we got to the venue - Norman Park, which is the largest park in Bromley. It's mostly sports fields, but there is a small channel of water that runs through the centre. 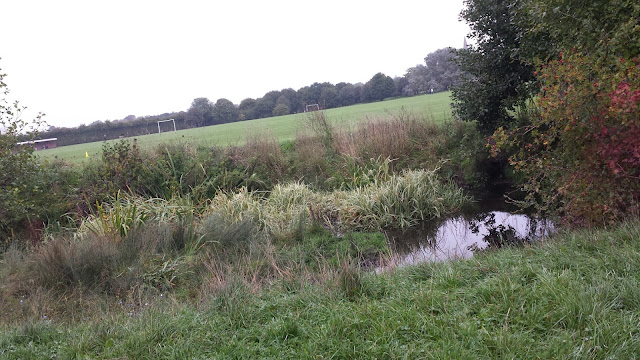 We entered the park via Hayes Lane and parked in the car park close to the entrance. There is another car park on the opposite side of the park which you can easily access from the A21 (Bromley Common). This venue attracts four hundred runners, and once you add other users of the park plus users of the athletics track it's not long before the car parks are bursting at their seams. 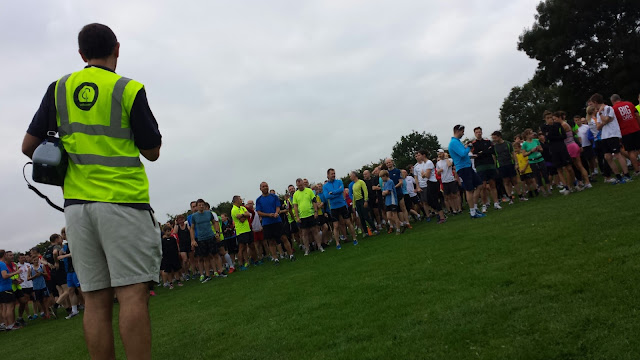 Bromley South looks like the closest train station, but Hayes (Kent) isn't too far away either. Of course, if you're a lover of buses there are plenty that pass the outskirts of the park. I didn't spot any dedicated bike racks but there were a few lamp posts and small trees that were being used, plus a few cyclists had left their bikes in the pavilion... 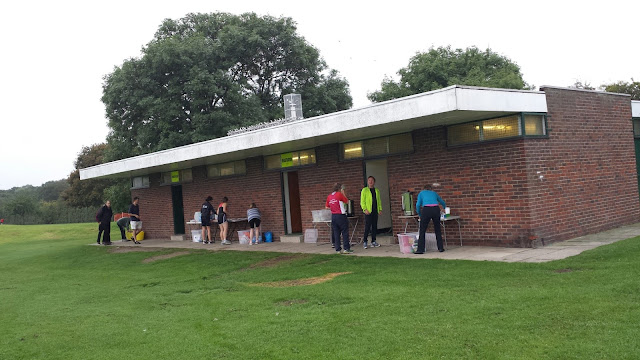 ... which also houses the toilets and is a base for all things parkrun - All of the signage, cones and other essentials are stored here. The toilets are here, and there is a bit of space for changing, and the post-run refreshments are set up here. 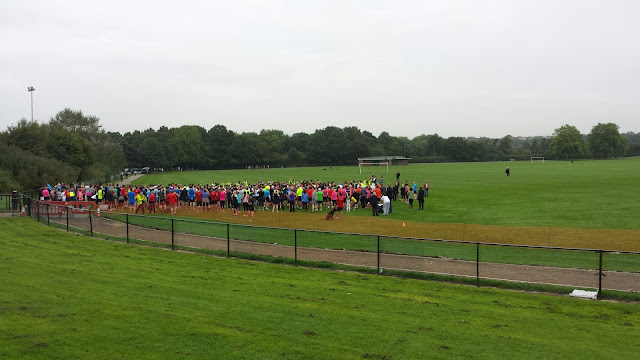 The land that now forms the park was formerly owned by the Norman family (no surprises there) who lived in 'The Rookery' for almost two-hundred years before selling the land 'for a very low price' to the Borough of Bromley in 1939. The Rookery burnt down in 1946. 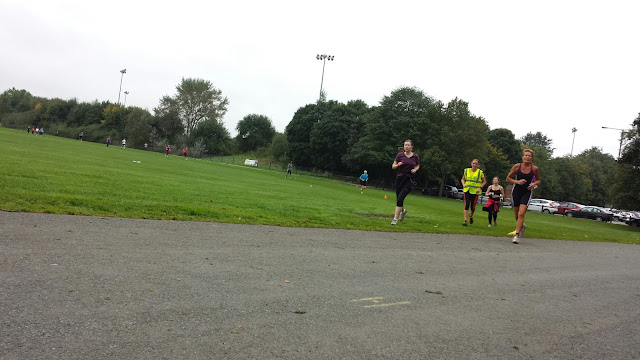 In 1981 a 6 lane athletics track was opened in the park. Over the years it has become one of the busiest athletics tracks in the country and now features an 8 lane straight. It is graded as a class 1 facility by UK Athletics. Although it is right next to the start of the parkrun, you wouldn't realise as it is hidden behind trees and bushes. 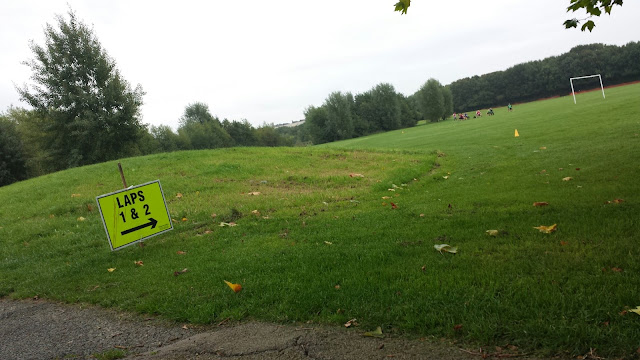 The parkrun starts next to the playground at the south-west corner of the park and takes you on a two-and-a-third lap clockwise course on a combination of tarmac paths and grass. The start is nice and wide and there is plenty of space to accommodate the large number of runners. 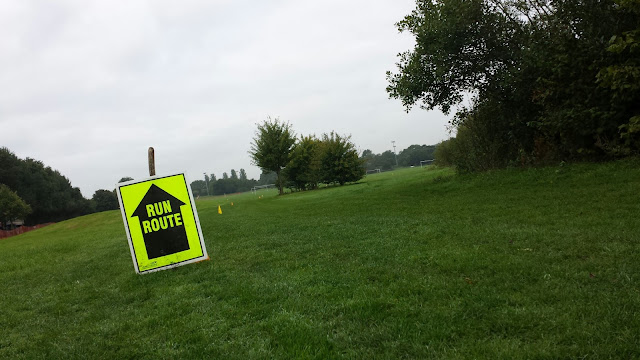 Before it starts there is a small briefing for anyone new to Bromley parkrun, and despite previously having a full course description from the day's run director, David, I joined and listened. Of course I had already painstakingly analysed the course map beforehand but it doesn't hurt to listen to the experts! This is followed by the main briefing for the whole field shortly after. 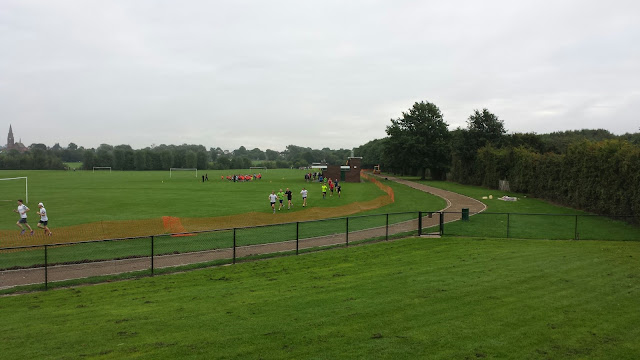 The important thing to remember here is to always keep the cones to your right - you'll find the entire course is lined with them so there is no excuse for getting lost or cutting a corner! So after the initial hustle and bustle of the start section, you hit the first tarmac path and follow it for about 150 metres before turning back onto the grass to loop around the 'finger of trees'. 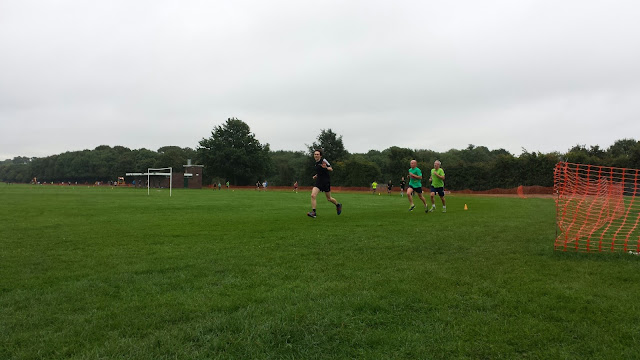 Once you have looped around it, you briefly return to the tarmac and then turn back onto the grass to make your way around towards the back straight - however on the day I visited some work was being done to the back straight. The council were removing the gravely path and installing a new tarmac path - while they were doing the work, the path was closed so the parkrun course stayed on the grass, meaning that almost the entire course was on grass - I think it's usually about a 50/50 split between grass and tarmac paths. 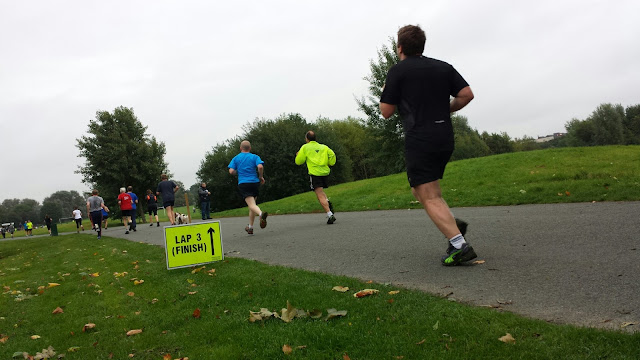 At the end of the back straight you pass the playground and the start/finish area, then do the loop all over again. After two full loops, when you return to the first section of tarmac you head straight on instead of turning back on to the grass, and shortly after this you'll reach the finish line. 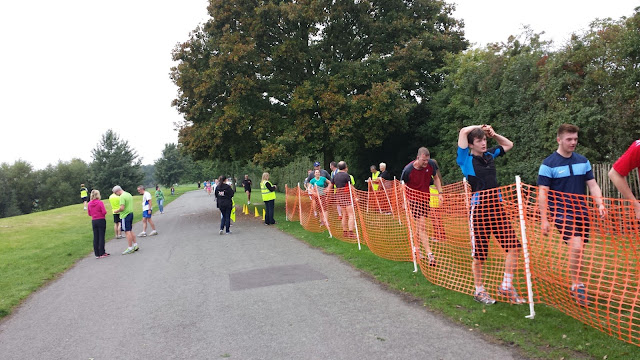 Scanning takes place in the pavilion - as you reach it you'll notice two doors, one is labelled 'odd' and one 'even'. I was holding finishing token 22 so entered the 'even' door, had my barcode scanned, and that was it for another week. 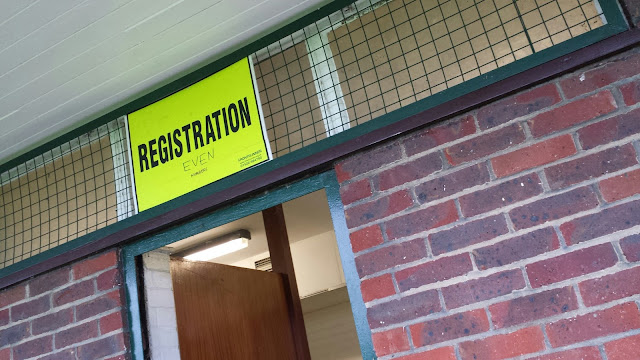 At the pavilion you'll find cakes, water and hot drinks for the runners, and although I left straight after (to go to Riddlesdown's post-run social) I'm sure plenty of runners hung around and had a good ol' natter outside the pavilion for a good while after the run. 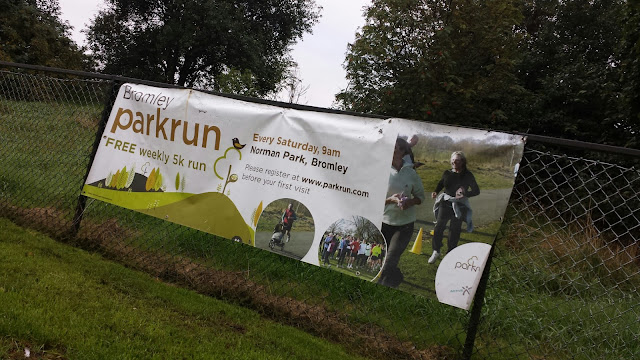 I didn't mention that the course is flat, so it's good for a personal best attempt and is perfectly fine for buggy runners - I did see one or two on the day I was there. The feeling is that when the new path is finished it could make the course a little faster than it previously was, so I've made a note to put that to the test at some point in the future.