The night before running at this venue, I stayed at my parent's house in Bermondsey and didn't get to bed until much later than usual. I didn't think I would be able to get out of bed early enough to travel over to Black Park in time for the start of the parkrun so I set my alarm for 8am and resigned myself to staying local. My plan was to jog down to Southwark parkrun and run there instead. However, I woke up at 6.58am on parkrunday, set my phone's sat nav to Black Park and legged it out of the door before I changed my mind! 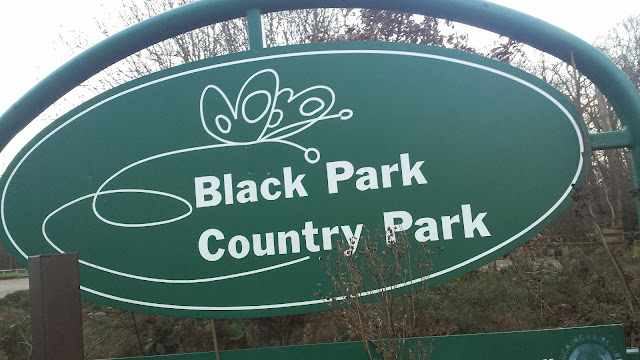 I remember looking up the details of Black Park parkrun when I first started parkrunning and put it on my list of venues that I'd like to visit, so I was really pleased that I had made the decision to drive over for the run. It is set in Black Park Country Park, in Wexham, which is easily accessible from the M25 and not far from Slough.

First things first. Upon arrival you'll need to feed the car parking machine. It's £2.50 if you pay before 9am (which I imagine you will be doing if you're here for the parkrun). After 9am it goes up to £3.50. Regulars would probably buy a season ticket, which works out cheaper. I have heard that a private company will be taking over the car park soon so this setup may change - best to check before travelling. I had read on Buckinghamshire County Council's website that the toilets do not open until 10am so I was delighted to find that the toilets at the open air cafe (kiosk?) next to the car park were actually open.

The run starts about one hundred metres or so along the path once you have passed the toilets. It takes place over one lap, is almost completely flat and run on compact earth and gravel paths through the woods. I visited in the winter so wore my trail shoes, but at dryer times road shoes would be just fine. Thinking about it, my road shoes would probably have got me through the day I went without too much trouble.

An important thing to note is that there are no marshals out on the course. Instead all the corners have signage in place which you'll need to keep an eye out for because you sometimes reach junctions where the footpaths meet. Saying that, this is a very well attended parkrun so you'll almost certainly have other runners to follow around the course.


So the run starts in the usual manner and runners head off around the 530 acres of woodland, heathland, and grassland. This is one of the more difficult parkruns to give a detailed course description on. The runners follow a large figure of eight shaped route on fairly wide woodland paths. Even though we had had quite a bit of rain recently, the course itself remained largely dry with only a few puddles every now and then.


The scenery doesn't really change a great deal throughout the run and it would be quite easy to lose your bearings if you were running alone. The one point I remember where there is a break in the trees is where the course meets the A412 at the southern border.


Further along, around the 4km point the course runs quite close to Pinewood film studios, which borders the eastern edge of the country park and probably most famous for its links with the James Bond films. You can't see the studios but it was nice to know that I was running right next to a place with such a rich cinematic history.


The start and finish areas are in slightly different places but not too far away from each other. Runners can leave any bags they may have with them in the bag drop area at registration. After the run all runners are filtered round into the Go Ape outdoor seating area where the registration area is set up. It's very well organised and did the job really well. There's even a tub to drop your finish token in if you've forgotten your barcode.


As I mentioned above, this is a very well attended parkrun. On the day I visited there were 372 runners, but the wide paths seem to handle the numbers quite well. I started towards the front so am not entirely sure if things get congested further back.


Another thing to note: The venue doesn't have the greatest mobile data coverage so if you use an app on your phone to track your run you might find that it takes a long time to upload the file afterwards. I found the signal slightly better in the car park, and that's when my file finally uploaded.


It was great to finally run at this parkrun after having it on my to-do list for so long. It's a great place to run and the locals are lucky to have such a lovely venue on their doorstep. As always, it would never happen without the volunteers so thank you to you all.