In the London Borough of Wandsworth you'll find an area just to the north of central Tooting called Tooting Bec. It takes its name from Bec Abbey in Normandy which was given the land after the Norman Conquest in 1066. In 1086 Tooting (including Tooting Bec) appeared in the Domesday Book as Totinges.


Within Tooting Bec are the Tooting Commons (plural), but are typically referred to as the singular 'Tooting Common'. There are in fact two separate commons originally separated by a watercourse known as York Ditch which ran along what is now Dr Johnson Avenue. The Western and Southern parts are called Tooting Graveney Common - This area contains the Tooting Bec Athletics Track which is home to the Herne Hill Harriers running club.


The part of the Common that lies to the East and North of Dr Johnson Avenue is called Tooting Bec Common - This is where you'll find the Tooting Bec Lido which was opened in 1906 and is one of Europe's largest open air swimming pools. It is a popular filming location and was used in the 2000 movie Snatch. As of 30 January 2016 Tooting Bec Common became home to Tooting Common parkrun.


This parkrun has been quite a while in the making and is the first to be hosted within the London Borough of Wandsworth. While to begin with on a trial basis, this represents a big step for the local council who have strict policies in place for events in their open spaces and were understandably nervous about hosting an event with an unknown number of participants, not just once, but on a weekly basis.


If you are not within walking distance of the venue, the best way to travel here is by public transport or bicycle. There are two bike racks just outside the Tooting Bec Common Cafe, if they are full there are some more near the tennis courts and another set next to the car park. Using public transport comes with the options of bus (249, 315, 319 or G1), train or tube. The closest tube station is Tooting Bec (Northern Line) while the closest national railway stations are Balham or Streatham Hill.


If you do travel by car you can attempt to park in the free car park on the corner of Dr Johnson Avenue and Tooting Bec Road, but be warned that it is small so spaces can be hard to come by. As an alternative it looks like most of the local side streets are free from parking restrictions on Saturdays so they may also be an option. Public toilets can be found over at the aforementioned Tooting Bec athletics track - they were nice enough but the mens changing room is like a labyrinth and it took me a while to find my way back out. Also note that you may have to press the buzzer at the gate to ask someone to let you in.


The meeting point for the start of the run is just near the Tooting Bec Common Cafe which is situated in a historic Victorian building- this cafe is also where the runners and volunteers go for their post-run social. The cafe also has a single toilet, but this is unlikely to be open before the event. If you take a look around the Common you'll see plenty of people out and about - there seemed to be a good selection of military fitness groups doing their training and there were plenty of runners out and about. There were also a fair amount of dog walkers.


The route consists of running three, anti-clockwise, triangular laps plus there's a little tail at the top of the triangle which is only used for the start and finish. From what I've read it seems to be known locally as the Tooting Triangle. Underfoot you'll mostly find tarmac paths but the southern edge of the triangle has a slightly different surface which I can only describe as very compressed dirt - it was a little springy and I really enjoyed running on it. For footwear, I'd say that standard road shoes will be fine all year round. Buggy runners will be fine on the course but there is a note on the official route page that says that due to the bollards and narrow sections on the southern side of the course, this course is not suitable for large running buggies. (Update: I took part with our standard sized running buggy in 2021 and was able to squeeze through the gaps - a double width buggy probably wouldn't get through)


The event is marshalled at each corner, but there were no signs put out around the course because the route is so easy to follow that they are simply not required. The path at the start is fairly narrow and I was very impressed that there was an effort made to sort runners into approximate finish times at the start to make everything go off just a little smoother. The three sides of the triangle can be described in the following ways; 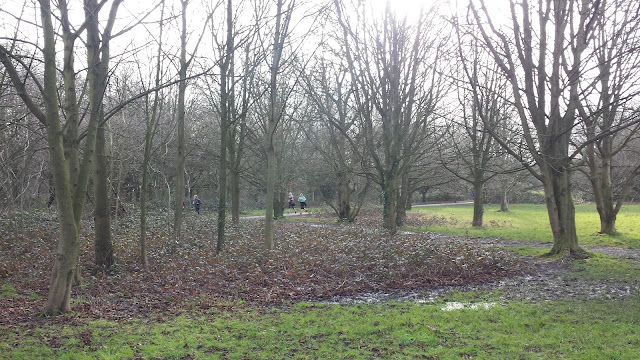 Side 1: This is the widest of the paths and it is also a people-cyclist shared-use path. Runners pass the children's playground, the lake, and tennis courts then continue right to the end where they pass the car park as they reach the South-Western corner of the course and take a 90 degrees turn to the left. The route feels like it briefly leaves the boundary of the common at this point.


Side 2: This one contains the springy, compressed dirt path and it starts with the runners passing through a narrow gap between two posts. It runs adjacent to Tooting Bec Road and despite the rumble of passing vehicles, I really enjoyed this section. There is a tight left hand turn just before the lido entrance which marks the end of this section and underfoot returns to a tarmac path.


Side 3: This is the longest of the sides (the hypotenuse if you like) and it also features what felt like the narrowest of the paths. It was a little splashy in places along here and care must be taken when passing members of the public, even more so given the fact that the run is still in its trial period. This side takes the runners right up to the most northerly point of the course for a sweeping left hand turn which leads back onto side 1.


Contained within the triangle is a beautiful lake (or pond) which can be seen from a few points during the run. Adjacent to the north bank of the lake there is what appears to be a large boulder possibly called the 'Wood Stone' which is actually a fossilized remains of a tree trunk from the Lower Purbeck Beds. The Commons provide a selection of important wildlife habitats in the form of scrub, acid grassland, woodland and of course the lake.


Anyway, after completing the Tooting Triangle three times, the runners break off from the loop and head back towards the start/finish area. The finish is just off the main path on the grass so all you need to do is follow the cones on the grass. The barcode scanner(er)s were well positioned just after the finish line and there was plenty of space to mingle or cheer on fellow runners once you've finished.


I visited the venue on 20 February 2016 which was event number 4 where there were a total of 293 participants (please note: as of March 2018 numbers have grown significantly since my visit and you can now expect to find in excess of 600 participants every week). The course can only be described as pancake flat and super-fast. The only thing that is likely to slow you down is congestion along the paths, which is pretty standard stuff on a three lap course with this many runners. I did of course record the run using Strava so if you would like to see the course in detail please take a look here - Strava: Tooting Common parkrun.
Update: I revisited in December 2021 at event 233 where I participated with my son in the running buggy and everything is still the same. I made a relive video out of the 2021 GPS data, you can find it on my youtube account (link below).
Links:
Strava GPS data from 2021 (same as the 2016 course)
Relive Video from the 2021 GPS data