The New Balance Fresh Foam Zante V2 is a neutral cushioning running shoe with a 6mm heel to toe drop. As it says on the tin, these come with New Balance's Fresh Foam midsole cushioning technology. 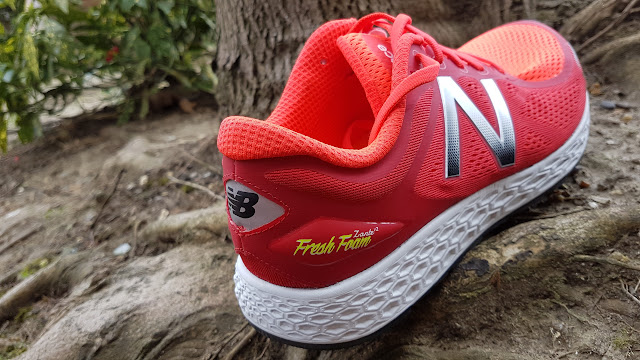 The description from New Balance UK is as follows;

Engineered mesh on the upper of this neutral running shoe for men eliminates the need for overlays, providing softer support, while the Fresh Foam Zante v2's bootle-like fit gives you a second skin-like feeling that's streamlined for speed.


The first thing I said when I took these shoes out of the box was 'ooooh..... pretty'. And I still stand by that. They are very good looking. So from an appearance point of view New Balance have come up with a winner. There are a few reflective elements on the shoe so that should assist a little with being seen in the dark. They have also produced a children's version of the shoe which my daughter has been testing, read about it here - New Balance Fresh Foam Zante v2 (kids).

The upper feels nice around the foot and the laces hold everything in place nicely. Incidentally the material of the laces feels different to what I have been used to in the past. They have a slight stretchy, elastic quality to them and it feel like this might assist in stopping them from undoing mid-run. Saying that I stuck with my usual method of tying double knots.

You could be forgiven for thinking that the inclusion of the Fresh Foam midsole would mean that this is a shoe with a plush, bouncy feel to it. However the Fresh Foam in this shoe differs to that found in other Fresh Foam models on offer by using convex hexagons rather than concave in some areas of the midsole. This gives the shoe a firmer and snappier response than it would have otherwise had.

For anyone used to running in a shoe like the New Balance 1080, these will feel firmer and less cosy on the foot. However, during testing I have found that as my run progresses the fresh foam retains a greater level of comfort than I would have expected with a pair of shoes that are marketed as being 'for speed'. This made me feel more comfortable about going a little further in training than I might have if they didn't have the Fresh Foam.

I was a little concerned when I had read about the mid-foot and arch on the V1 of this shoe being a little uncomfortable, but it appears that New Balance have made some adjustments to the updated version and I have had absolutely no issues with any elements of the fit.

I've also been over to my local athletics track in these shoes and I was impressed with their performance. They are nice and light so I could put in some good interval training, and I'd like to note that I didn't once think about my shoes during the track session. This is a good thing.

I found the undersole looks and feels like the rubber you'd find on a tyre and I have found this to give me a great level of grip on the roads. However, if you take it off-road, especially onto wet grass or muddy trails (like I did for a brief section during the Darent Valley 10k 2016) it will not give you the same level of grip. Quite simply, the Zante is a road shoe and that's what it does best.

So, this is a shoe that performs well on the road/track but not made for off-road running on wet grass or muddy paths. New Balance seem to have found a nice medium between a racing shoe and a standard road shoe. With this shoe I felt snappy when I needed to push the speed, while still feeling more comfortable underfoot than I would have expected from this type of shoe.

So two months on and I absolutely love the Zante V2. I've been using it for all of my training and racing on the roads and on the track, and I have no complaints whatsoever. As I'm still nervous about a long-term knee injury I haven't done any more than about 11km in one go, so I can't really offer any insight into what these are like on a proper long run. I very strongly suspect that when these wear out I'll be replacing these with an identical pair. Great job New Balance!