Dartford is a town in Kent, just inside the M25 motorway. It lies on the old Roman Road between Dover and London (Watling Street) and takes its name from the point where the road crossed the river (Darent Ford = Dartford). The town was also the location of a Royal Manor House built for Henry VIII after the dissolution and subsequent demolition of Dartford Priory. 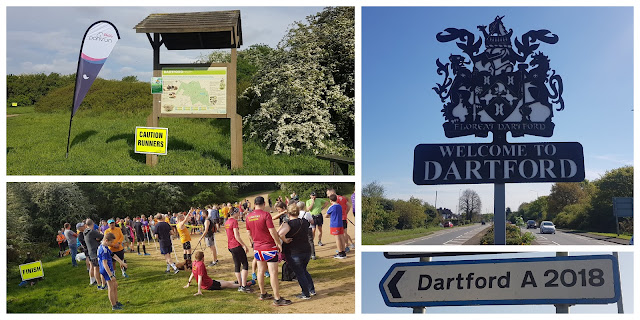 To the South-West of the town centre is where you will find Dartford Heath which is one of the last remaining areas of lowland heaths in the south-east. The first recorded size of the heath was in c.1797 when it was said to be 500 acres in size - over the years, housing and road developments have reduced the size of the heath down to its current 314 acres. It lies within the county of Kent but is just a stone's throw from the border with London.

The heath hosted a ceremony in 1660 where King Charles II made an address. In April 1930 a young woman was murdered on the heath when a man quite randomly jumped from some bushes and stabbed her in the back - he was subsequently caught and sentenced to death. During WW2 anti-aircraft guns were installed on the heath. These days the heath is recognised as an area of outstanding natural beauty and is also a valuable habitat for wildlife, it's also a well known and popular spot for gentlemen looking for company in the evening (if you know what I mean). 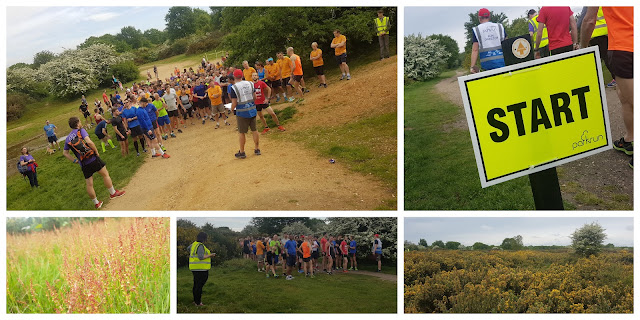 In May 2018 the heath became home to a brand new weekly event, Dartford Heath parkrun. This 5k event joined the existing, well established Dartford parkrun and with the area being off-road, offers the local community a slightly different type of running experience as well as assisting to relieve the pressure from increasing numbers at Dartford and other local venues. As it was set up by friends of mine, and is really a second home venue, I broke with my rule of no longer attending inaugurals and jogged the 3km from my flat to the heath.

Although the total area of the heath is over 300 acres, the road network that criss-crosses the area means that it has effectively been sliced into many smaller compartments, and with parkrun courses unable to cross roads, the whole course is contained within just one of these compartments. The landscape contains a mixture of open grassy meadows, large areas of bracken and gorse, as well as some wooded areas too. 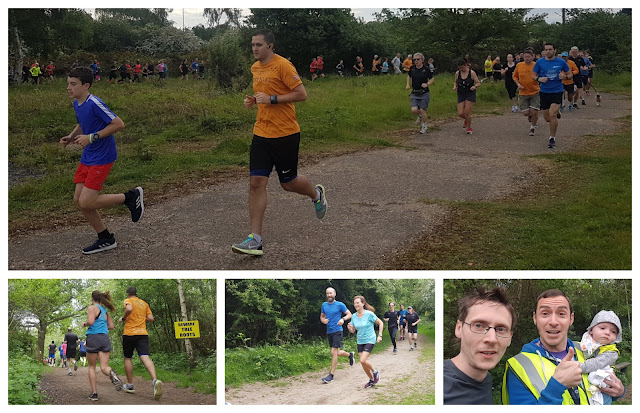 Dartford Heath parkrun takes place within the largest and most central compartment. It's important to note that the heath does not have any facilities, so if you are likely to need to use the toilet you may want to plan that into your journey and visit one en-route. I can suggest a pit-stop in Dartford town centre where there are public toilets within Central Park (ironically next to the original Dartford parkrun's start line), or you could pop into somewhere like McDonalds or Wetherspoons (The Flying Boat, which opens at 8am).

The car park is tiny (approx 22 cars can be squeezed in), and only just manages to accommodate the heath's dog walkers, so you'll probably have to find somewhere else. Heath Close Road is the closest but local residents have raised concerns over parking here, so please avoid parking on this road. There is an additional car park on Oakfield Lane, and further roadside parking on Parsons Lane. With that in mind, you'll need to leave yourself enough time to walk across to, and find, the start area. There are access points at multiple places around the heath but the entrance next to the car park is the best one to use in order to find the meeting point. There are also no bike racks onsite, the best you'll find is likely to be the wooden rail that forms the perimeter of the car park. 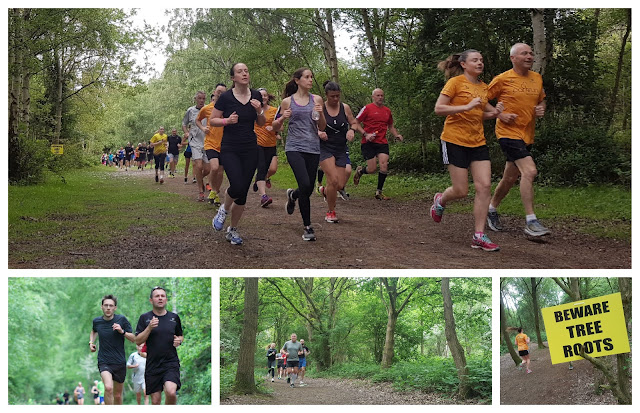 National rail services will get you into central Dartford, but the heath is around 3km away from the station. Better still, if you happen to be on a train that stops at Crayford you could alight there. Crayford station is actually a little closer at around 2km, but avoid using Swan Lane as there is no pavement. If you're looking to extend your parkrun into a longer effort then jogging from either station to the venue is simple enough, but is uphill from both. There are also a few bus services that pass fairly close to the heath - these are the 453, 429 and the B12.

The meeting point is in a clearing next to Donkey Pond (possibly more of a large puddle in the summer) which is one of three ponds on the heath. It's not far from the very small car park off of Heath Lane (for the record you cannot park on Heath Lane). With the run briefing held, the participants are lead a few hundred metres around to the starting point. The course here is flat apart from a couple of short, sharp slopes, and is run on a mix of trail paths, stony paths, grass and some patches of concrete. Trail shoes are definitely the way to go when conditions are wet underfoot, however during the dry months road shoes will be just fine. 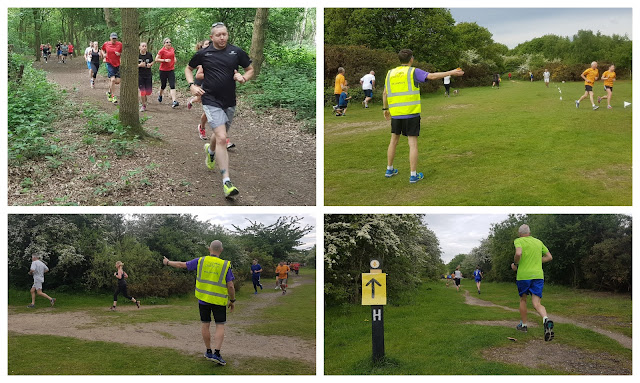 The route is made up of just under two clockwise laps around the heath. The start area is of a fairly standard width and the crowd head off to the south-west following the stony trail path. Dartford Heath is one of those venues that is difficult to describe in great detail, but underfoot briefly changes to a concrete path which remains in place from the heath's WW2 military use.

There is a large loop early on in the lap which takes the participants through some beautiful woodland where the path contains a good covering of tree routes, so watch out here. Also, this loop also features a two-way section where you have to keep left - the 'keep left' signs are very clear but it is really easy to drift to the right, so pay attention, especially during the section with a blind corner. 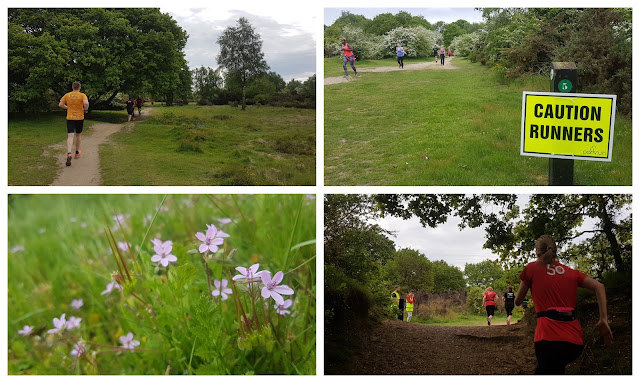 The heathland is not quite as open as you might imagine before visiting and the route in front of you is the only real thing to focus on, and apart from the out-and-back section you don't see any other runners apart from those around you. The route continues to work its way around the heath using the well defined paths, but being an off-road course you will still find the odd trip hazard like rabbit holes, tree roots and large stones.

Towards the end of the lap, the course passes through what are known locally as the Glory Bumps - these are a series of parallel mounds which were created by brickmakers digging for brickearth in the 1800s. You'll quite often see kids on their BMXs of mountain bikes using them as dirt jumps, and I hear have been responsible for many broken bones over the years. Don't worry, the course doesn't actually go over these bumps. 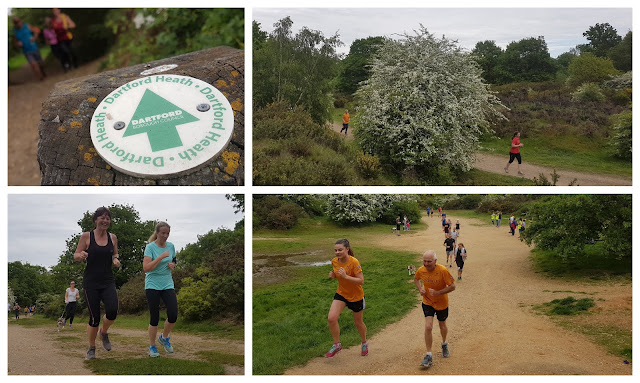 After passing the original meeting/briefing point you'll follow the path you walked along to reach the start area and then repeat the lap a second time. The finish line is found back at the meeting point and this is also where barcode scanning takes place. As I mentioned above, there are no facilities on the heath, so you may find that attendees simply head off home after the event. Of course some will make other arrangements and it's quite possible that a selection of the day's regulars and volunteers will end up down in Dartford town centre in The Flying Boat.

I recorded the course data using my Garmin and you can view that on Strava, here; Dartford Heath parkrun GPS data. I also created a fly-by video with the Relive app on my phone and you can view it on Youtube, here; Dartford Heath parkrun course flyby. The results for event 1 were processed and online shortly after the run. A huge thank you to all of my Dartford based friends who volunteered to make it happen - I did offer to help with the course setup but my newborn son had other ideas and I sadly didn't make it in time. 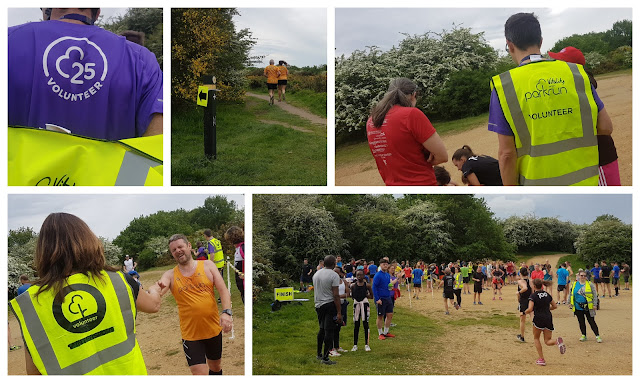 All I can say is that everyone involved has done a fantastic job getting this parkrun up and running. The heath really is a great place for it, and even the lack of onsite facilities does not take anything away from this special venue in Dartford. For myself and the other locals it gives us a second parkrun within walking/running distance of the town centre which is totally different from our beloved original venue in Central Park. I'm really looking forward to experiencing the course as it changes through the seasons.