In the East Hampshire district of Hampshire lies the town of Bordon. It has a history of settlements dating back thousands of years, but the beginnings of the modern version of the town came in 1826 when a turnpike road (now the A325) was constructed to link the towns of Petersfield and Farnham.

In 1863, the growth of the town was fueled when the War Office purchased some land known as Hogmoor Inclosure from the Monarch to use as a training ground. This established a link to the British Army that would go on to last well-over 100 years. By 1899 the first of the 'Bordon Camp' barracks living quarters had been constructed with many additions and modifications added in subsequent years. 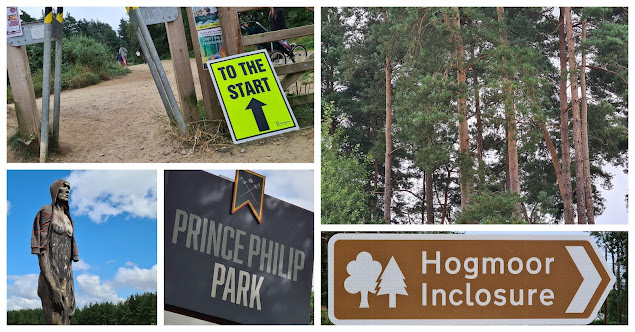 Over the years, the training camp was used mostly by the British Army, but also had periods during the first and second world wars where the Canadian Army were based here. Much of the training here has involved tracked vehicles (such as tanks) as the sandy soil replicated the conditions of many areas where the troops would be deployed. By 2015 all military training had been moved away from Bordon and the re-development of the town began.
The area of re-development is known as Prince Philip Park and is currently still in progress, Not only will there eventually be 2,400 new homes which will increase the population from c.14,000 up to 23,000, but the development is creating an entirely new town centre. This comes complete with new shops, leisure centre, drive-in cinema, arts centre, cafes, town squares, office spaces and a park. 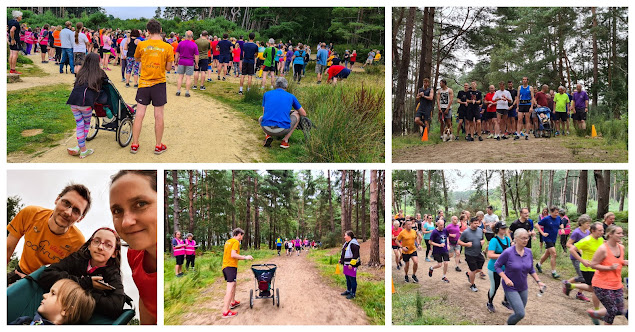 The adjacent former-training-area of Hogmoor Inclosure is part of this project. The Inclosure is a 54 hectare area of woodland and heathland just to the west of the town centre. The name Hogmoor comes from the middle ages where the area was home to many wild boars (aka hogs). The legend is that young noblemen would have used dogs and long spears to hunt them.
It is now open to the public, and has been designated as a SANG (Suitable Alternative Natural Greenspace). This is an area that is aimed at protecting nearby SPAs (Special Protection Area), in this case Wealden Heaths and Woolmer Forest, from increased visits and all the negative effects that too many visitors can bring as the local population increases. 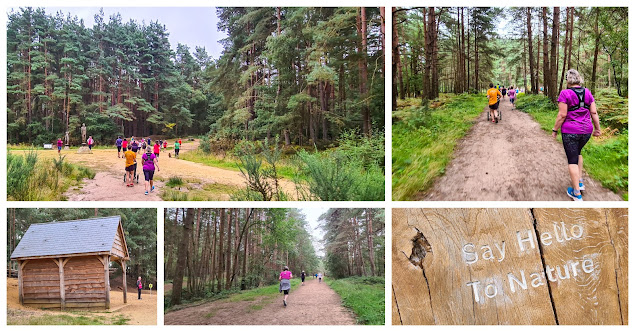 To facilitate this, it now has a car park, a cafe, toilets, an educational and event space called The Beehive, a large natural playground and various other interesting bits and pieces that we'll come to later. In March 2018, it became home to a weekly 5km event called Hogmoor Inclosure parkrun.
We drove to the venue in August 2021 and parked in the large on-site car park, which is free-of-charge. If you were to cycle to the venue, you could secure your bike to one of the seven bike racks located next to the toilets. As far as other transport options are concerned, using a bus is currently the only public-transport option to get close to the venue, and busses seem to run to Bordon from most of the local towns. 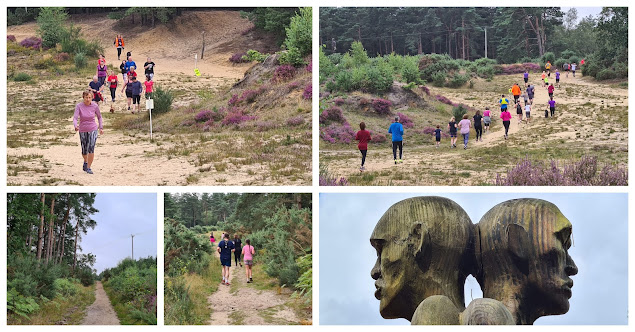 There was, for a time, a military railway line that terminated at Bordon, this was not only used for transportation, but as a trainline construction training facility. The line was closed in the mid-1960s. With the current expansion of the town, the possibility of the line and station being re-instated has been raised, but from what I can see it doesn't seem to be moving forward. So the closest train stations are Liphook, Alton and Farnham where you'd need to use the respective bus services to complete the journey.
The main facilities are all grouped in the area next to the car park, which is very convenient. Pre-event, the parkrun volunteers and participants congregate in the triangular-shaped open space just to the east of the car park. The briefings take place here and the event starts a few metres away on one of the forest paths. The course is comprised of two anti-clockwise laps, the profile is largely flat with some mild undulations, and underfoot is a combination of dirt paths and sand. For shoe choice, I'd go for trail shoes in anything but the driest conditions. 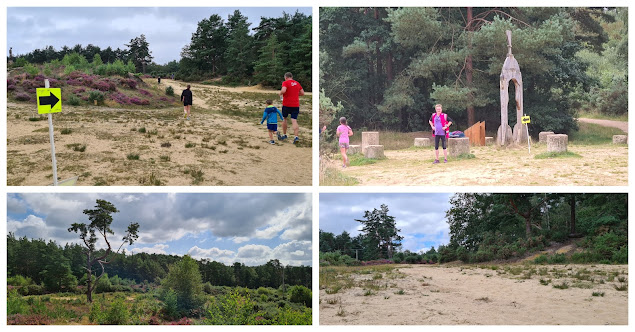 Once under way, the route makes its way to the southern end of the park where there is a large loop to negotiate. On the way you will spot the bat lodge - this provides an undercover shelter and resting area for humans and also a roof area for nesting bats.
Also dotted around the site are 11 wood-carved sentinels - they represent the lives of the people who have lived in the area over the centuries. You may also notice the large concrete blocks that the sentinels stand on - these are commonly known as 'dragons teeth' and are left-over from the army's training. They are used to impede the movement of tanks in war zones and would have been a useful training tool. There are more dragons teeth dotted around the playground area (great for photo opportunities). 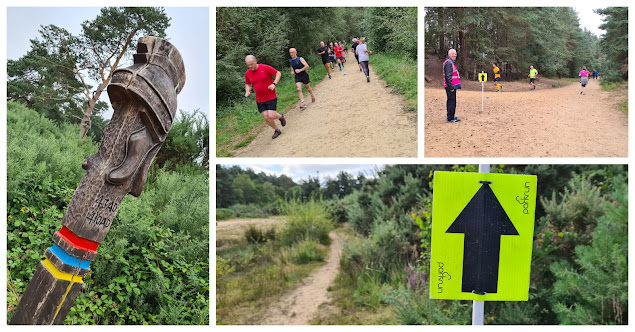 The course switches back and forth between pine forest paths and the open scrub areas. Sometimes the path is really wide, but there are also a few sections where it narrows down to pretty much single file.
This is also a good time to mention the sand. Geologically, the area sits on the Folkestone formation which is a layer of sandstone, however the lithification process was poor, resulting in a lots of loose sand that has not managed to form into sandstone. The result is lots of areas that are sandy. On most of the paths the parkrun uses, this is a light dusting mixed in with the dirt. But, there are a few sections that are pure sand and is like walking/running on a sandy beach. I had taken on the buggy running duties for the day, so had to work extra hard to push my 3 year-old through it. At some points we were 'drifting' as the back end kicked out - It was great fun for me and my son, but I would imagine that not all buggy runners would feel the same.
Returning to the north end of the inclosure via a two-way running section, there is then a northern loop through a different section of forest. Underfoot is firmer through here and it is bordered with barbed wire fences which I'm assuming are the ones the army installed to secure the area. This leads past the car park and back the the original meeting point, which now has a finish funnel in place. One more identical lap later and you can dive into the funnel, collect a token, take a breather and then get your barcode and finishing token scanned.
Once the 5km has been completed, refreshments are available in the on-site cafe 'Cafe Hogmoor'. There's a reasonable selection of hot and cold foods and drinks. I had a vegan sausage bap, which wasn't the greatest ever, but did the job. We then spent the rest of the day in the playground and exploring the inclosure in more detail. 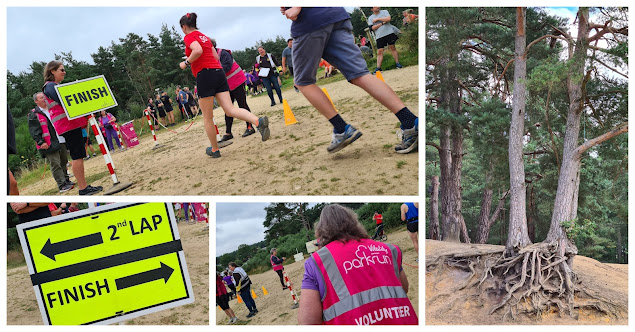 If you visit with kids, you'll find the playground to be very good - it's spacious with all kinds of things to play on. There's the longest playground zip-line I've ever seen, some vertical bouncy swinging things, various climbing frames and of course, tonnes of sand. We kept an eye out for any reptiles, as I had read that this area of Hampshire supports all of the UK's 12 native reptile species. Sadly I didn't spot any, but we did see loads of slugs, dragonflies and hoverflies.
We found an old abandoned rusty vehicle next to the playground, which I couldn't quite identify but looked like it would once have had tracks. We found a forest den and found some more sentinels that we hadn't spotted during the parkrun. There are hidden channels carved into the landscape by tanks, some overgrown, hiding just off the main paths. Then we stumbled across, the entrance to the underground bat bunker. We also took some time to visit the nearby Bordon Military Cemetery. 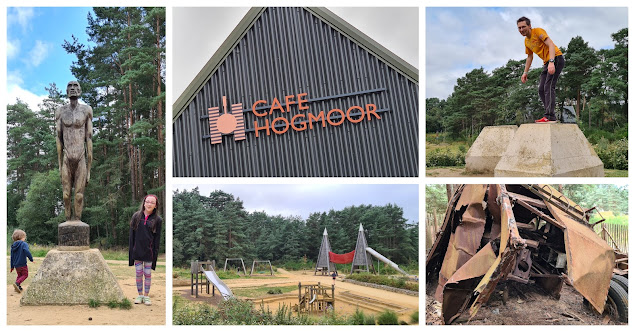 Our parkrun results notifications came through while we were exploring and we saw that there had been 233 finishers at event number 112. This was slightly higher than the current average of 193.3, but this may have been due to some other nearby events having been cancelled over the bank holiday weekend.
I recorded the activity with my Garmin and you can see the GPS data on my Strava account, here: Hogmoor Inclosure parkrun #112. The data was also used to create this Relive course fly-by video: Hogmoor Inclosure parkrun relive video. 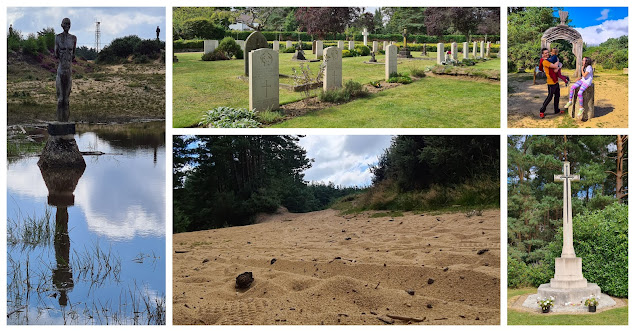 By 2.30pm we were finally ready to hit the road back home. The volunteers had all been very friendly and offered us lots of encouragement on the way around, and we were very grateful for being warmly welcomed to their event. Thank you.
Related:
The Hampshire parkrun venues
Posted by copy7t at 19:17