In the East London Borough of Redbridge, you will find the town of Ilford which has a population of over 160,000 people. The name of the town is first recorded in the Domesday book of 1086 as Ilefort which supposedly means Ford over the Hyle. Hyle being the old name for the River Roding which flows along the western border of the town. Ilford is now one of the most ethnically and culturally diverse places in the UK.
One of the most significant historical places in Ilford is Valentines Mansion and its grounds. This Grade II listed building was originally built c.1696 for a lady called Elizabeth Tillotson who was Oliver Cromwell's niece and also the widow of the Archbishop of Canterbury,  John Tillotson. The name Valentines comes from an earlier estate that existed in the same location. As the years passed, the mansion changed ownership several times and the current building's appearance is largely from modifications made in the 1760s and 1811. 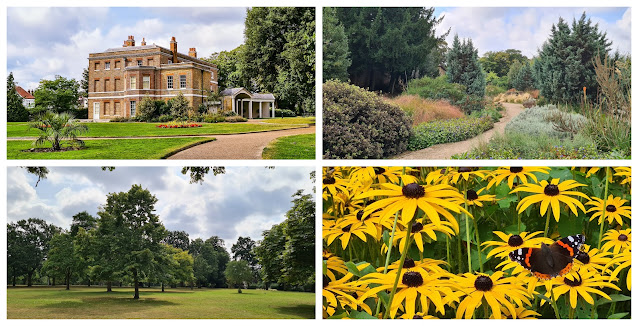 An interesting fact is that the Valentines used to be home to a grape vine (Black Hamburg). In c.1768 a cutting was taken by Lancelot 'Capability' Brown and this was planted at Hampton Court Palace. This cutting has been thriving ever since and is known as The Great Vine. It is the largest grape vine in the world.
Back then the mansion sat in the open countryside, miles outside of London. Of course it now sits right in the middle of the busy urban sprawl of the city. As the town of Ilford was growing, Ilford Urban District Council recognised the need for a municipal park to benefit the well-being of its residents. A 19 hectare piece of land at the southern end of Valentines was bought and developed into Ilford's flagship park, named 'Central Park' or 'Cranbrook Park' opened in 1899 (different sources state different names). 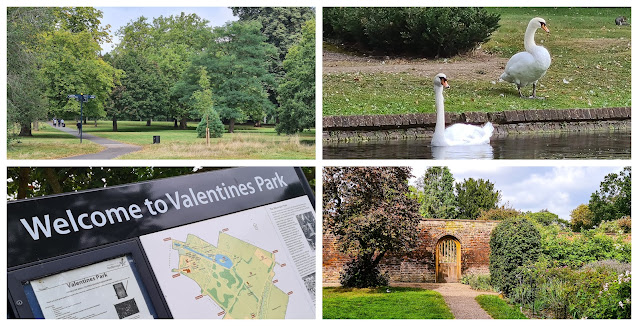 The park was then enlarged in 1907 when an area at the northern end of Valentines' grounds was donated to the council and a further area was purchased to link it to the existing park. By now the park had been renamed Valentines Park, which is the name it retains to this day. A few years later, in 1912, the council purchased the mansion and its remaining grounds. A small part of the grounds were developed into housing, but the majority was also incorporated into the park.
At 52 hectares, the modern day park is the largest green space in the London borough of Redbridge. General facilities in the southernmost section include, children's playground, boating lake, outdoor gym, tennis courts, toilets and a cafe. The northern part of the park has more of a formal feel to it and this area boasts walled gardens, the mansion, various ponds where you should spot some swans, a wilderness walk and another (fancier) cafe. The mansion and formal gardens were visited by The Queen in 2012 as part of her Diamond Jubilee Tour. 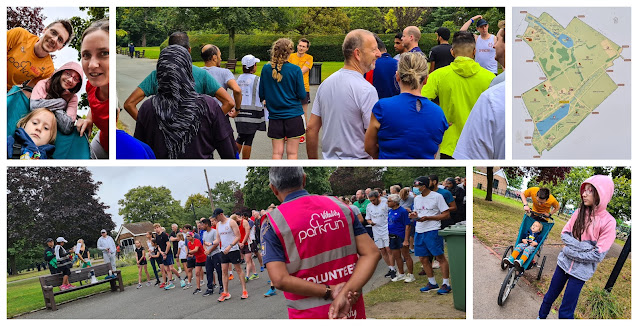 The park is a Grade II Listed Landscape, has a green flag award, and has placed in the top ten (out of over 2000) in the People's Choice awards for best park on six occasions between 2012 and 2020. In 2011, the area adjacent to the mansion was used as the filming location for the second season of The Great British Bake Off. Also in 2011, the park became home to a free, weekly 5km event called Valentines parkrun. And this is why we were visiting the park.
This wasn't my first visit to Valentines parkrun. I had previously attended the event in December 2012 where there were 56 participants. On that occasion, the weather was dreadful and despite having a decent run, the park hadn't really left much of an impression on me. I left straight after I finished the run as I was soaked through and needed to get home and into some dry clothes. I was pleased that for my return visit, the weather was much better and we went as a family which meant we'd be spending a good few hours in the park afterwards. 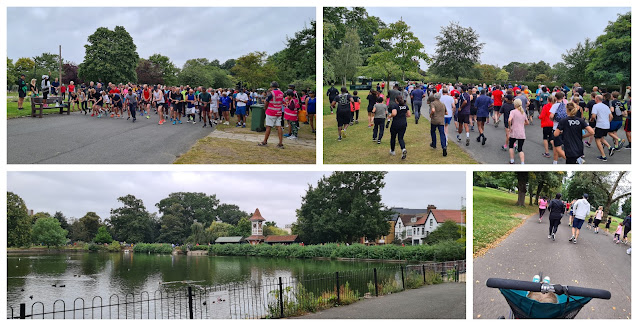 Before we left home, I checked the car parking arrangements. There are a few places to park within the boundaries of the park itself, which is very convenient. However there is a cost involved with this - plus, all payments must be made by either using the RingGo app or website which depending on your point of view is either really handy or a bit of a faff. The thing is, most of the side streets around the perimeter of the park are restriction-free, so we just parked outside the western side of the park on Emerson Road for free.
When I visited in 2012, I had travelled using the tube. I alighted at Gants Hill station and entered the park via the northern end. The closest railway station is Ilford which is just to the south of the park. There are also numerous busses that stop close by. For cyclists, I spotted a few cycle racks around the park but there are also additional fences near the start/finish that could be used as an alternative. 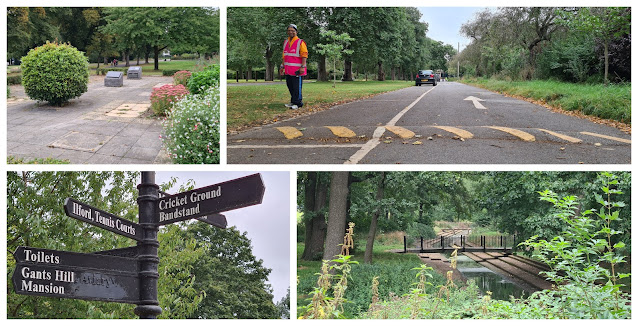 Upon entering the park, we headed towards the southern section near the boating lake which is where the parkrun meets, starts and finishes. This area contains the playground, cafe and toilets. The toilets were your basic no frills variety that did the job, they are very close to the start. There are additional toilet facilities at the northern end of the park near the mansion, plus some more outside the park the southwest corner on Cranbrook Road.
The course has been modified since my original visit. It consists of a start straight, followed by two anti-clockwise laps, and then a finish straight. The course is flat and 100% tarmac underfoot - perfectly fine for buggy running and for wheelchair athletes. Road shoes are fine here all year round. In terms of numbers of attendees, the official average is currently 181.1. Pre-covid the weekly number of attendees had started to exceed 300 each week, but since parkrun returned from the covid shutdown, the numbers have been in the low 200s. 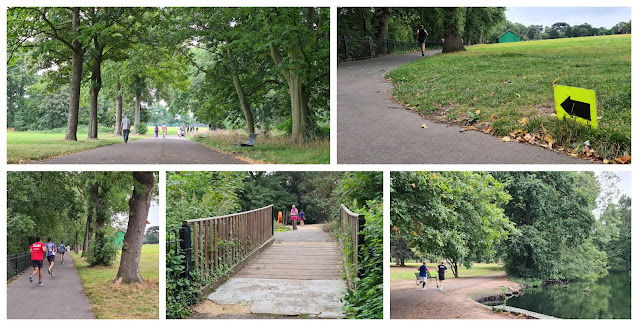 So, just before 9am everyone gathers on the path on the northern side of the boating lake (opposite the playground) right next to the Wishing Well which I noticed a lot of people used as a place to store bags etc. It's a nice wide path which works really well as a start-finish place. At the end of this path, the course heads around the western side of the boating lake. Here the course passes the Valentines Park Clock Tower which houses a plaque commemorating the 1899 opening of the park.
At the southernmost point of the course, you pass the Holocaust Memorial Garden before heading along the meandering path towards the easternmost point of the course. Caution may be required here as the course actually crosses one of the car parks. On my first lap a car crossed the course as I was approaching. Also at this corner of the course there are three speed bumps to go over - the event director had given numerous warnings about them, so it's worth being aware of their existence. For the record, my son was being pushed by my wife in the running buggy and he loved going over them. 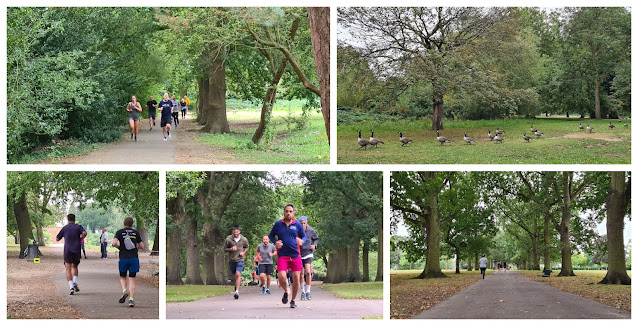 From here you work your way into the eastern side of the park where you'll cross and run adjacent to the Cranbrook Corridor. The Cran Brook feeds into the boating lake via a man-made channel. More water features await further around the course where you briefly travel alongside the southern edge of the duck pond. We saw a really humorous sight of geese walking towards the pond in a long line (see photo above), unintentionally mimicking exactly what all the parkrunners were doing.
The course doesn't go all the way to the northern end of the park, so you only briefly get a glimpse of the mansion while cutting through the central avenue heading over the the western side. Before you know it, you are heading back towards the main meeting point where you'll pass the playground and tennis courts before taking another turn to head alongside the beautifully manicured cricket pitch which is home to Ilford Cricket Club. 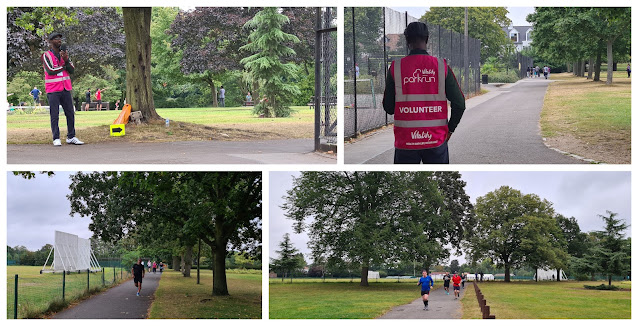 There is another crossing of one of the car park entrances before completing the first full lap. The lap is completed a second time and at that point you can turn back down the opening straight, which is now the finishing straight. There is a bandstand along here, however it's not quite complete - the base remains but the roof and the supporting pillars were removed in 1968 to make way for the Ilford War Memorial which was due to be relocated from the Ilford War Memorial Garden at Newbury Park. However the plan was abandoned and as the bandstand was rarely used, it was never restored.
The finish is in exactly the same spot as the start, so after we had finished the event we had our barcodes scanned and then headed into the Valentines Park Cafe as did some of the parkrun volunteers and participants for post-event refreshments. It seemed to have a good selection of breakfast options (including a few decent looking vegan options). We grabbed some hot drinks and headed into the playground... 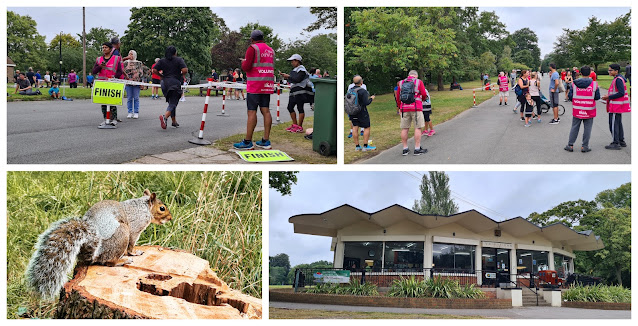 It's quite a decent one with separate areas for younger kids and the older ones. The playground has an animal theme and it looks like most of those depicted relate to Ilford. You'll see squirrels, swans and foxes which are understandable. Initially I thought the mammoth was included as a fun addition, but it turns out that the most complete mammoth skull to be found in the UK was discovered in Ilford in 1863. It is on display in the Natural History Museum.
The results for event 487 were processed and online a few hours later. 232 people had taken part and this broadly falls in line with the current expected number. Should you wish to see further detail of the course, my GPS data can be found on my Strava account: Valentines parkrun GPS data. The Relive course fly-by video can be found on youtube: Valentines parkrun course fly-by. I'm very pleased that I revisited this venue as it has given me a new appreciation of this wonderful park. Everyone was very welcoming so thank you to all the volunteers for making our visit extra special.
Related:
The London parkrun venues
My original Valentines parkrun blog from 2012
Posted by copy7t at 18:57