Sizewell is a fishing hamlet in the parish of Leiston in Suffolk which sits within the Suffolk Coast and Heaths Area of Outstanding Natural Beauty (ANOB). The settlement was part of a country estate which featured Sizewell Hall as the main dwelling. This building is still owned by the same family that bought it in 1859, however they moved out when it was commandeered by the army during WW2. The house is now used as a Christian Conference Centre. 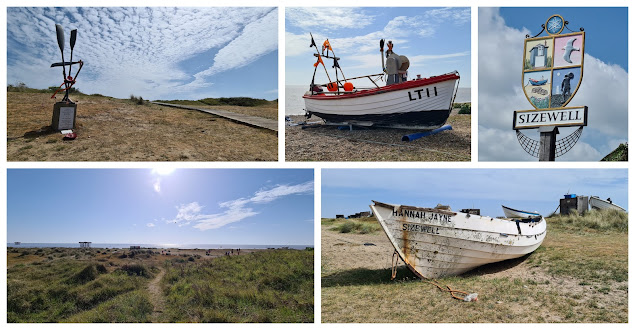 Historically the settlement was/is an extremely quiet, sleepy place, but like many coastal places, does have a link to smuggling. In Sizewell's case their most famous link is to a notorious group called the 'Hadleigh Gang'. Sizewell is also a known landing point for Dutch people fleeing the WW2 German occupation by sea. They were known as Engelandvaarders (England Voyagers) and some who arrived at Sizewell made it there using kayaks. Sadly many who attempted the journey did not make it and they are commemorated with a memorial on the beach. I understand one of the original kayaks was part of the memorial but that doesn't seem to be there anymore.
There is one pub in Sizewell, called The Vulcan Arms. If you check out the sign outside the pub, you'll see the illustration contains a Vulcan Bomber, Spock (Human-Vulcan hybrid), and Vulcan (The Roman God of Fire). Aside from a few houses, the Sizewell Beach Holiday Park, and a small cafe, there's not much else in the centre of the settlement. The seafront is now home to a weekly 5km event called Sizewell parkrun, which we visited in May 2022. 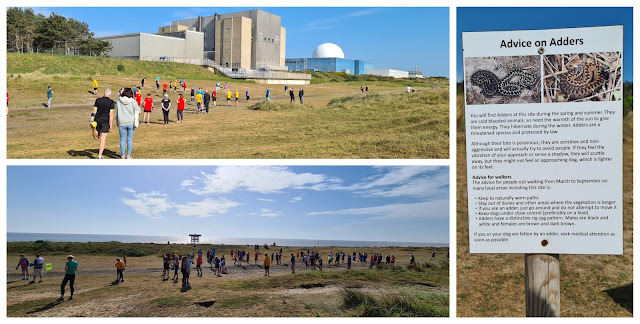 Car parking can be found at the Sizewell Beach Car Park which currently charges £1 for up-to two hours, £2 for up-to four hours, or £4 for the whole day - I paid using coins, but you can also do so via the RingGo app. There doesn't seem to be any public transport that can get you all the way to the venue. The closest train station I can see is at Saxmundham which is 7 miles by road to the west and it looks like the '64 Ipswich Reds' bus can then be used to get you as far as Leiston. The country lane that runs from Leiston to Sizewell does have a shared-use (people/bicycle) path, so it would be possible to safely walk or cycle the remaining 2 miles.
Once at the venue, toilets can be found adjacent to the car park. If you happened to cycle, there is a rack in the car park. From the car park, you simply head over the sand dunes and onto the beach area where you'll see the finish area. The briefing and the start can be found a little further along the beach. The briefing here specifically mentions the possibility of Adders being present on the course. This is backed up by signage along the beach alerting visitors. 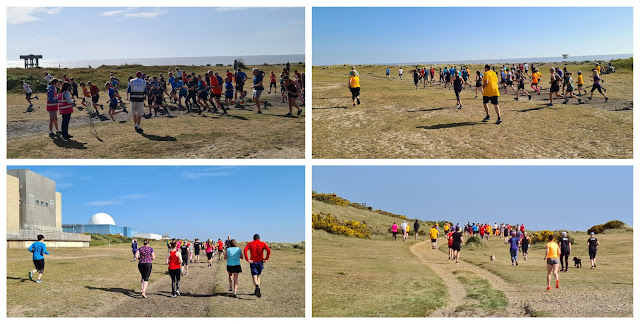 By this point you'll be fully aware of the huge buildings the dominate the seafront. These are the Sizewell Nuclear Power Stations. The one that looks like a concrete box is Sizewell A - construction started in 1961 and was operational from 1966 using two Magnox reactors. Its operational lifetime was 40 years and was closed down in December 2006. It is currently being decommissioned and this process will take almost 100 years to fully complete.
The one with the dome on top is Sizewell B. This is the UK's only commercial Pressurised Water Reactor power station. It was built between 1987 and 1995, providing power from that year onwards. It is currently due to close in 2035, but this may be extended. The dome is part of a containment building which encloses the nuclear reactor. These are usually airtight and designed to withstand the impact from a fully-laden passenger aeroplane. 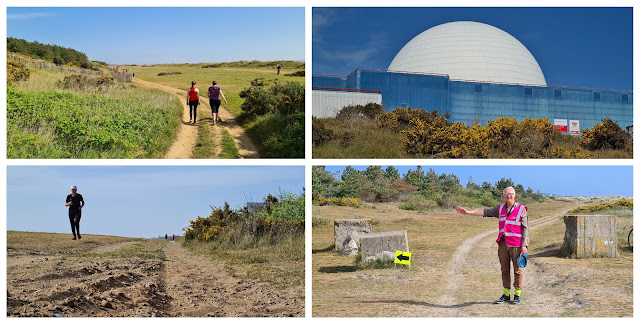 The parkrun course starts in their shadows and takes place over a 1 lap out-and-back course. The seafront here is very natural and you'll find dunes and long grasses lining the entire course. It really is a beautiful stretch of coast. Underfoot the path has double track indentations (looks like it was made using a vehicle) with a raised central part.
The route contains a combination of grassy, sandy, and stony terrain. Some of the sandy bits are very sandy indeed and you'll find the energy being sapped from your legs. Fortunately there aren't too many sections like this. There are however some minor changes in elevation, so it's not a pancake flat route. 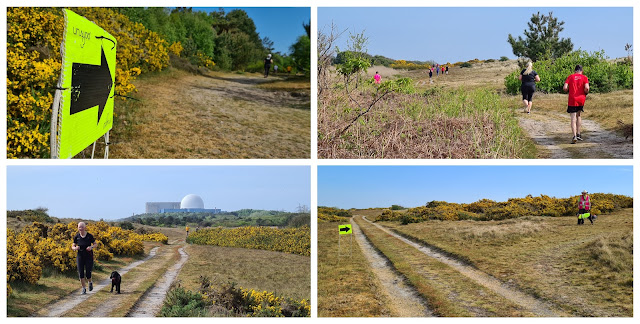 As far as footwear is concerned, trail shoes felt like the natural choice for me, so I went for them and I was happy that I did. For anyone that doesn't enjoy using trail shoes I'm sure road shoes would be fine when it is dry or summer. Buggy runners are welcome here, but it'll be a bumpy ride for the occupant and of course it'll be hard work through the short sandy sections. The course is nice and easy to follow, which means only two marshals were required.
Although the route is essentially an out-and-back, the far end of the course takes place on a 2 kilometre long loop and this means that the majority of the field will not see any fellow participants returning from the turn-around point. During the loop the course just skirts the edge of the RSPB Minsmere Nature Reserve. The return leg gives great views of Sizewell B and its glorious dome. Interestingly, although the event takes place adjacent to the sea, the nature of the of the sand dunes means that you don't really see much of it. The finish line can be found adjacent to the car park and barcode scanning takes place immediately afterwards. Although it would have been amazing to have spotted an Adder, I was actually quite relieved that I didn't. If you need a little more of a visual of the course, please feel free to have a look at my GPS data on Strava or the course fly-by video, created with that data using the Relive app.
With the day's parkrunning finished we took a little walk in the opposite direction along the beach where we saw plenty of fishing boats and a wartime pill box. The area does seem to be fairly popular with dog walkers but most arrived after the parkrun had finished. It's also worth noting that the power stations are due to be expanded in the coming years with the addition of Sizewell C. This is planned to be built on the land adjacent to Sizewell B. 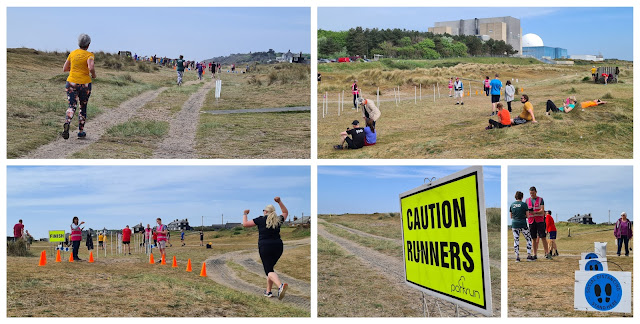 The results were online shortly after and 95 people participated. This is a fairly typical number for this venue. We then decided to buy some breakfast in the aptly named 'Sizewell Tea' cafe. The menu options cover the usual hot drinks plus some cooked breakfast items in baps. I can confirm that the veggie sausage baps and hash browns were pretty tasty.
We followed this up with a visit to the ruins of Leiston Abbey which is just a couple of miles away (I recommend popping over to see it, there's a small car park, no charge and you are free to explore for as long or little as you like).

It's a lovely place and although some people may see the power stations as an eyesore, everyone I spoke to seemed to be quite fascinated by them. They were certainly a draw for us - it's the first time I've been this close to anything nuclear.
As always a massive thanks goes to all the volunteers involved.
Related links:
My GPS data
The Relive course fly-by video
The Suffolk parkrun venues
Posted by copy7t at 15:58