The 1,000 year old Markshall Estate sits in the Essex countryside in between Braintree and Colchester, and just outside the small town of Coggeshall. The estate was recorded in the Domesday book as Merceshala and it was home to the de Merc family for around 400 years. By the beginning of the 17th century the name had become Markshall and when a new owner constructed a Jacobean mansion to replace the older timber-framed house, the name was modified to Marks Hall. The estate eventually ended up in the ownership of Thomas Phillips Price, who had previously been an MP. 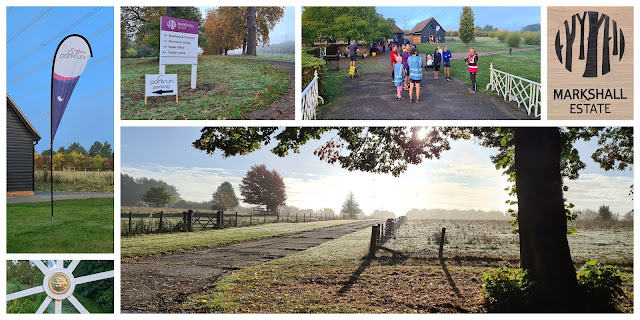 Thomas Phillips Price, concerned about the environmental impact of his business links to the mining industry, wanted the Marks Hall Estate to be used by the Royal Botanical Gardens, in Kew, who were looking to establish a satellite location outside of London for their collections. Ultimately another location was chosen, but that did not deter Price in his mission and he had instructions written into his will that once he and his wife Mary had died, the estate should be held in trust for 'the advancement of agriculture, arboriculture and forestry'.
The estate was requisitioned by the Air Ministry a few years after Price's death and this lead to the construction of RAF Earls Colne airfield and base which was primarily used by the United States Army Air Forces. By the end of the war the mansion had fallen into such a bad state of disrepair that it was demolished in 1949. Significant areas of the estate was subsequently let to the Forestry Commission for the growth of commercial timber. When Mary died in 1966, the formation of the trust got underway and this was formalised in 1971. 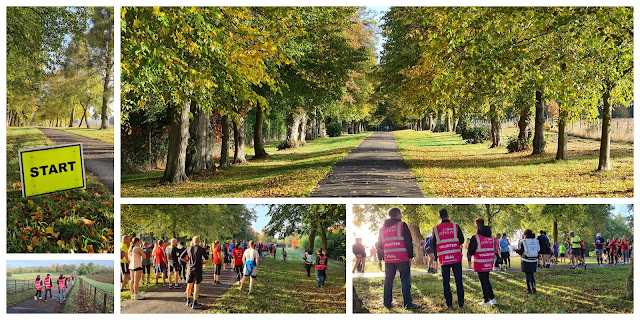 The modern-day estate follows Price's original wish and a large part of the land is an Arboretum. The planting is grouped into four distinct zones; North America, Asia, Europe and Gondwanaland (Southern Hemisphere). There are also two lakes within the estate, originally there were three, which are thought to have been dug by troops stationed at Markshall in 1648. There is also a stunning walled garden and various woodland walks. The estate is also home to the Honywood Oak which is thought to be around 800 years old.
In November 2021 the estate became home to Markshall Estate parkrun. This is a free, weekly, timed 5 kilometre event open to all abilities. We visited the estate in October 2022 and took part in event number 47. Travel to the event seems to be best by vehicle, and upon arrival there is a free-of-charge on-site car park. The nearest train stations seem to be Kelvedon, Marks Tey or even Braintree, however they are a considerable distance from the Markshall Estate and there doesn't seem to be any public transport options to complete the journey. 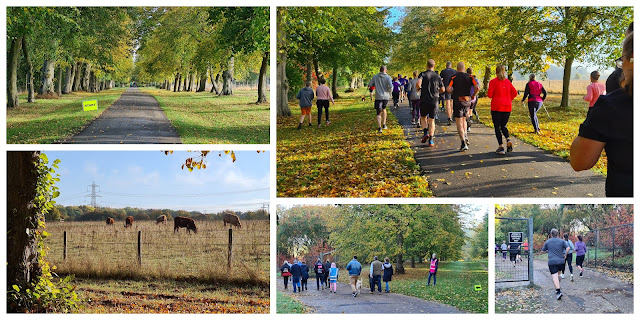 The car park is located right next to the visitor centre which is home to the toilets. When we visited, the toilets were already open by 8.30am. The initial meeting point is next to the visitor centre and this is also where the first-timers briefing takes place. The actual start line is approximately 600 metres away, so at around 8.45am there's a mass movement of volunteers and participants over to the start area (see the GPS recording of the route from visitor centre to start line). If you have any items which need to be stored, it's best to leave them outside the visitor centre before heading across.
The parkrun takes place on a one-and-three-quarter lap anticlockwise course. The surfaces underfoot are a mixture of tarmac, concrete, gravelly paths and a tiny bit of grass. The course rises and falls ever-so-gently but largely it's barely noticeable with the exception of one section. As far as shoes are concerned, regular road shoes would probably suffice most of the year round, but I stuck my trail shoes on purely because I like to keep my roads super clean. The logic seemed to work out for me as there were some slightly mucky sections out on the course, and I imagine it could get quite splashy during the winter. 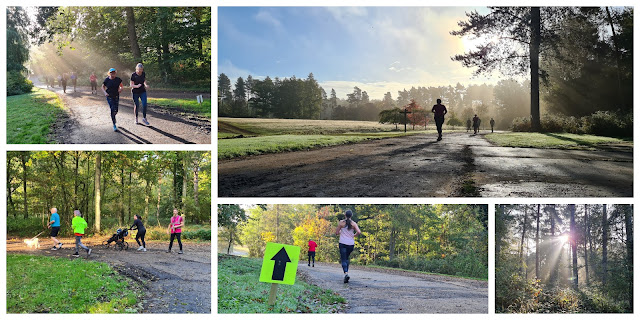 The opening section is a delight as it runs along a 400 metre long avenue of trees. The morning sunlight on the autumn leaves made it really memorable. I also spotted some cows in the adjacent field which was nice. It's really easy to follow the course as it simply keeps turning to the left as it encircles the central part of the gardens. Every now and then you may get a glimpse of the more formal parts of the estate but you don't really see them from the course. On the way around, the course passes through the different sections of the arboretum and I'm sure if I knew more about trees I would have known exactly which part I was in at all times.
Parts of the course use some old concrete paths, which were installed during the 1940's when the estate was a military base. It is worth noting that the concrete is showing its age and in some sections it is heavily cracked and could potentially be a trip hazard, so pay attention to what's underfoot. Also it is not uncommon for the odd vehicle to be present on the course (we saw two on the day we visited). Being in the middle of the countryside it's worth looking out for the wildlife, we saw plenty of rabbits and pheasants. 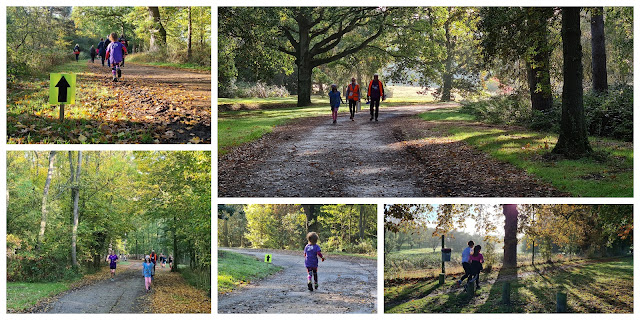 The course passes over the old iron bridge which crosses Robins Brook - this also feeds the lakes. It dates back to the turn of the 19th century and was renovated in 1992. It is a nice quirky feature of the course. The course also passes the site of the now-demolished mansion, this area now features The Coach House which is a wedding venue. There are of course plenty of direction signs dotted around the course, and at key points also marshals. When reaching the end of the 5km, the course peels off onto the adjacent open grass field where participants enter the finish funnel, collect a finishing token and then head off to be scanned by one of the wonderful volunteers.
The results for event 47 were processed and online a short while after and 195 people took part, which was almost identical to the official average. I recorded the GPS data of the course and that can be found on the blog7t Strava account, the Relive course fly-by video can be found on YouTube. 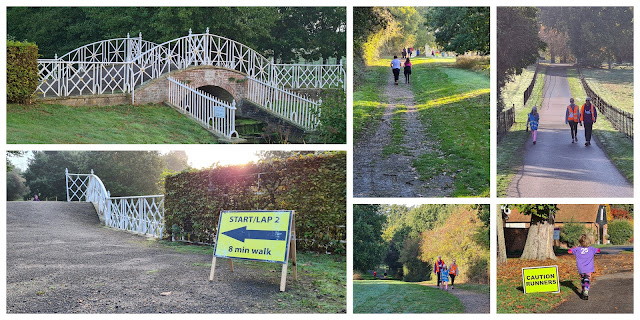 I was very encouraged to see a large group of walkers taking part. We were part of that group as we had volunteered to be the day's parkwalkers, anyway 22 people finished in over 50 minutes, which worked out at being over 10% of the total (there were a few more who completed a single lap). Post-parkrun refreshments can be had at the cafe in the visitor centre, which has both indoor and outdoor seating.
Should you wish to spend a bit longer at the estate exploring the gardens, lakes and arboretum, you may have to pay the entry fee (which didn't apply for the parkrun of course). We sadly didn't go back in and instead hit the road back home. We'd had a really nice morning out in the Essex countryside, made all the better by the friendly welcome we received from all of the locals. 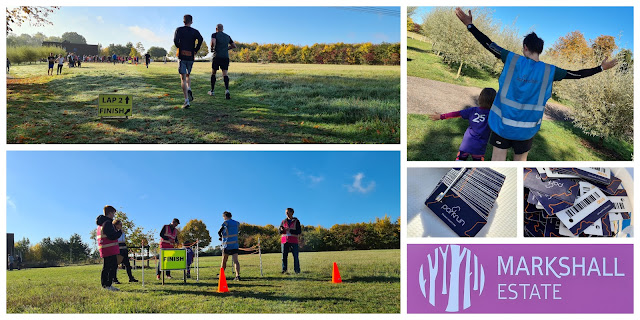 Marskhall Estate have their own website where you'll find a much more detailed explanation of its history, visitor information and plans for the future. Finally I'd like to add a huge thank you to all of the volunteers.
Related links:
The course GPS data (15 October 2022)
The Relive course fly-by video (15 October 2022)
The Essex parkrun venues
Markshall Estate Official website
Posted by copy7t at 22:53