One run, two countries - in the snow 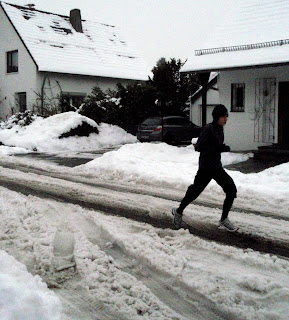 I'm posting from Germany, which just 48 hours ago I never would have thought possible (snow + eurostar = chaos), anyway, it turns out that having a 4 month old baby gets you fast-tracked when arriving to chaotic scenes at St. Pancras Station - Thanks Matilda.

There was a moment when I considered leaving my running gear at home - I am glad I pushed that silly thought out of my head.

My first run - An 'easy' run through a combination of cleared pavements (apparently the law says you must clear a path through the snow on the pavement outside your house in Germany), ice, deep snow, slushy snow, roads with no pavements where I had to jump into even deeper snow in order to avoid the traffic, and so on.....

As far as the weather goes, it must have been a degree or two above freezing but with no wind - It was amazing!

I've never been to this small town on the outskirts of Aachen before so I decided to head west along the main road that leads into Belgium. I knew that the border was only 1km from my start point, after 23 minutes or so I checked my GPS and I had done 4km - I was well inside Belgium. At this point I thought I'd turn back and retrace my steps and round off with a nice 8km run. As I was nearing my finish point I decided that I could easily squeeze in another 2km so I took a detour and managed to finish with a distance of 10.3km, the total time was 1 hour and 1 minute.

It was my first ever run in the snow, I thoroughly enjoyed every minute of it and intend to do it again as soon as possible. In a few days we'll be moving on to the town of Mücka (on the other side of Germany), I hope to do some runs over there. There is no way of me connecting to the internet once I am there so I'll post an update when the opportunity presents itself.

The photo above was taken by my wife, of me running along the road outside her Mum's house - Thanks bby. 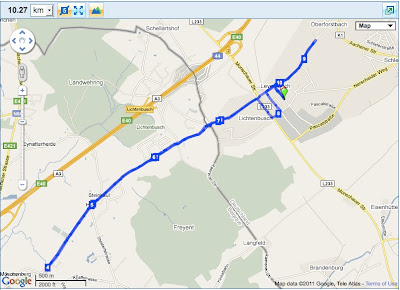