Today we went to Riddlesdown parkrun again, this was event number 3.

This week there were a few firsts.
I had decided before the run that I wasn't going to race. I'm happy to report that I stuck to this and spent the entire parkrun alongside Danny, at a nice steady pace. 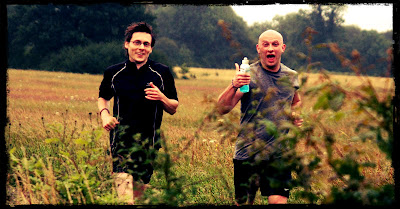 Me and Danny
Even though the forecast was for heavy rain all morning, we seemed to have a stroke of luck and when we arrived it was still dry. I was surprised to see a good turnout at the start line, in total there were 73 of us. 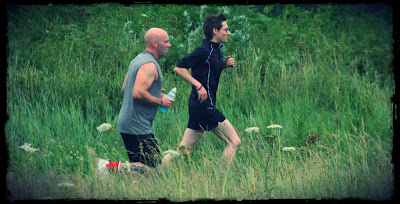 Nice and steady
We started near the back of the pack as we planned to have a fairly gentle run. I knew that we'd have a bit of congestion to deal with, but the good thing is that the congestion helped to keep our pace down. We decided to aim to finish in around 25 minutes.

Dani had set up her photography position at a point where she could capture runners at two different stages of the race, each time we passed her we tried to put in a nice variation of poses for the camera! 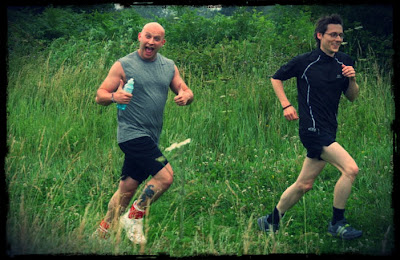 See what happens when you point a camera at people!
I promised that I'd throw in an aeroplane so...... 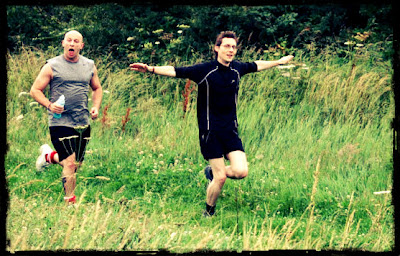 The aeroplane (and something else!!)
At the half-way point the timer called out our 2.5km split time - 12:30 - Perfect timing for a 25 minute finish!!

Focused.
As we were feeling quite good we decided to pick up the pace slightly in the second half. When we reached the last 500 metres we picked out a runner in front of us and tried to catch him. Unfortunately he had a similar burst of pace and we didn't quite manage to catch up with him, but it was a fun thing to do! We did manage to pass a struggling runner just before the finish line, he looked like he may have picked up an injury - I hope he is ok.

After we had crossed the line we decided that it would be fun to do one more lap! As always in these situations this is when something goes wrong. Remember the rain that was forecast? Well, it came down during this lap! 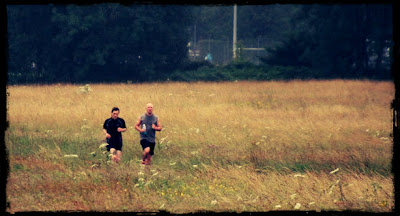 That extra lap sounded like a good idea at the time!
We finally met up with Dani and Matilda, all four of us soaked through (although Matilda wasn't really wet as she had been snuggled inside her bEco baby carrier the whole time). 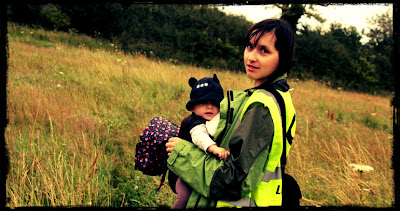 The official photographer and the Baba!
The GPS tracking showed that in total we had run 7.6km ( summary / map )

Overall, it was really enjoyable again. Looking through the results I noticed that I could have come in second or third place if I had gone out at my full 5k race pace. But it's not always about the finishing position. This weekend was all about enjoying the parkrun without having the pressure of putting in the fastest possible time. Dani managed to do a splendid job at photographing the event, espeically as she was multitasking (photographing / entertaining Matilda / trying to keep dry!). All she has left to do is trawl through two full 1 gigabyte memory cards to find all the best ones and upload them!