The week leading up to event 45 saw me increase my training by a tiny amount and I can report that both hamstrings were still feeling fine. Including the parkrun I have my total mileage up to 17km this week, which is about the same as what I'd like to be at for my long run. Patience is going to be the key ingredient in having a successful transition from the ups and downs of the last six months to a fully recovered body that is able to reach the dizzy heights (and beyond?) of last years peak.

Regardless of how much training I do during the week, the parkrun serves the purpose of letting me gauge exactly how the hamstrings are feeling. I have been pushing hard in recent weeks and I seem to be turning a corner. As I mentioned earlier, it's the patience part of it that is the key - I woke the day after parkrun with a burning desire to go out and run. However, I am forcing myself to have rest days between runs at the moment. Or at the very least - rest days either side of a hard run, especially the day after.

Pushing the above aside for now, here's what happened at parkrun: 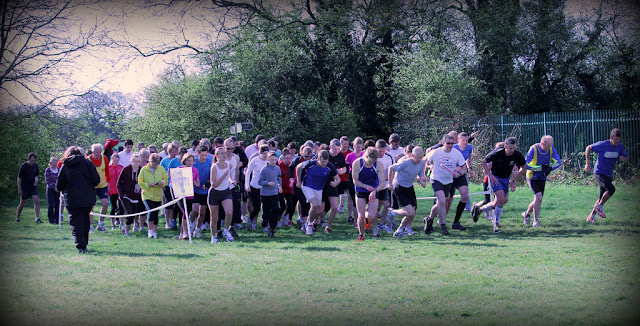 The weather over the days leading up to the run had been dominated by rain, this had left the course pretty wet and there were puddles-a-plenty around the course. The worst being a path-blocking lake that had formed just before the half-way point. We've had puddles here before, but in the past there had always been a tiny foothold or two on the edge of the path that enabled the runner to pass without dipping into the water. There were no such footholds on this occasion.

During the pre-run briefing we were given the option to take a diversion around the water feature by leaving the path and running around the bushes. 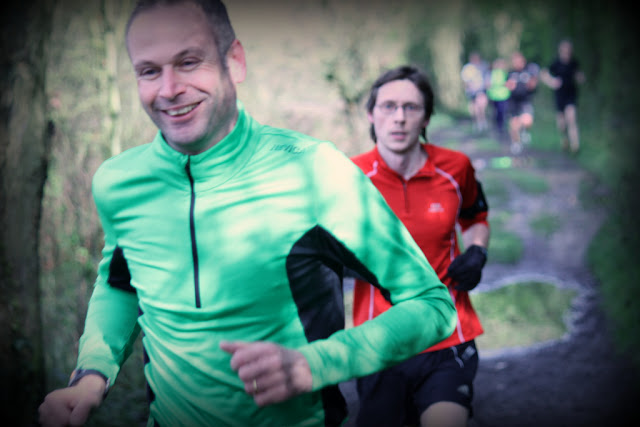 Today I returned to my usual spot at the back of the pack, where I was joined by Mark, Chris and Paul. We were dispatched and all set off at our respective paces. Chris, who is in great form at the moment, flew off in front of me and although I kept him in sight for a while, he soon became a dot on the horizon. Mark started slower but soon reeled me in and left me for dust!

The trail section had held onto some of the water from the recent heavy rain, but the puddles here were patchy and there was enough room to dance around them if you felt the need - which I did. 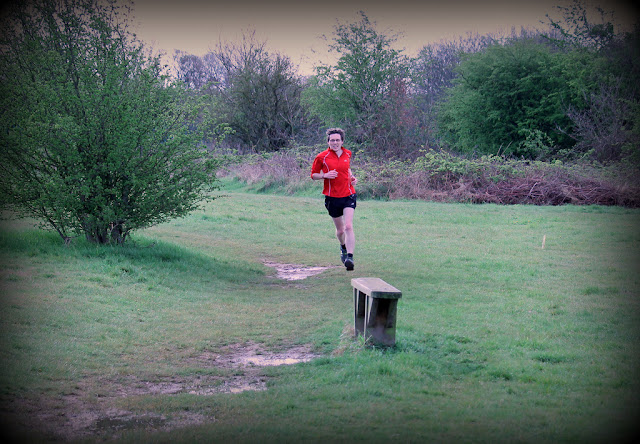 I had opted to wear my gloves but by the two kilometre point had whipped them off, a few seconds later, as if by magic, Nicki appeared and offered to look after them until the end. Thank you!

Next up was the blocked path, on approaching it I considered the options. In the end there was only one real choice for me, and as I passed the point of no return I started wondering what route to take through the puddle. I moved to the left and splashed through. The shoes picked up some water but not enough to trouble me for the second half of the run. 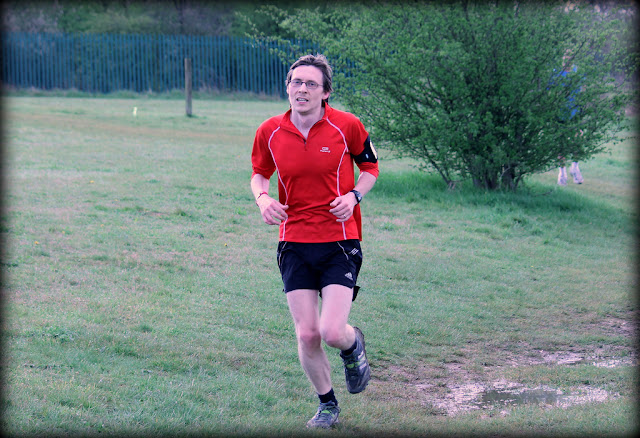 As I reached the approach to Condon corner there was a loose dog that seemed very interested in the runners ahead of me, so I slowed down until I was walking. I passed the dog and its owner without incident and eased back into a jog. 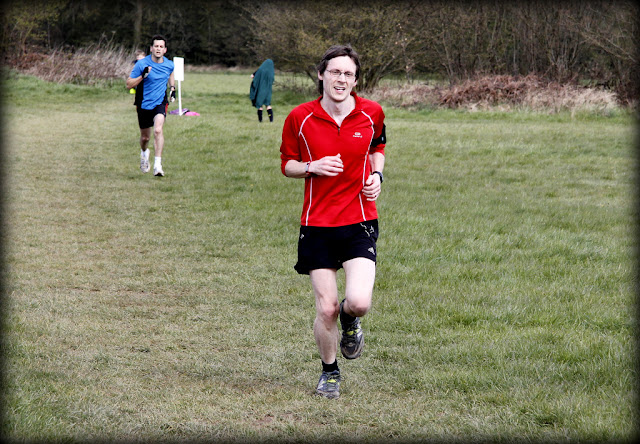 Once back in the trail section, a runner that I had passed a while back had caught up with me (that's what happens when you stop running I guess) and he pushed on in front. Once I had regained my rhythm, I started my attempt to move back into my previous position. The puddles slowed us both down, but I think he was slowed more by them because I found myself getting closer to him. Then at the end of the trail we were both weaving around the puddles. He must have lost concentration for a split second and pulled up to avoid running through quite a large puddle. 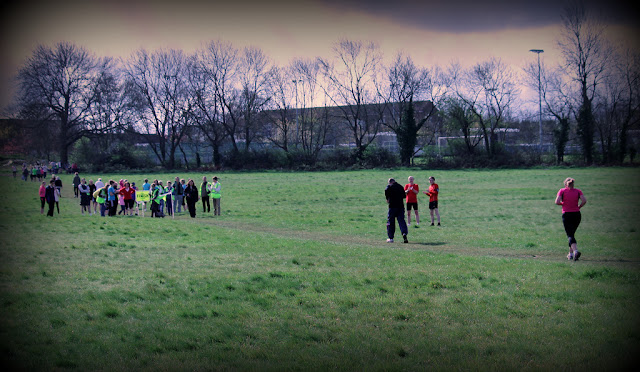 I continued on at my pace and came out onto the last section. This part of the course was waterlogged in places, so the main focus was on finding the firmest and driest sections.

Before I knew it I was on the final straight, over the line and presented with the number 12 finishing token. The time on my watch was 21:40. I'm pleased with my performance, given that the conditions were not ideal and I lost a bit of time around the dog. 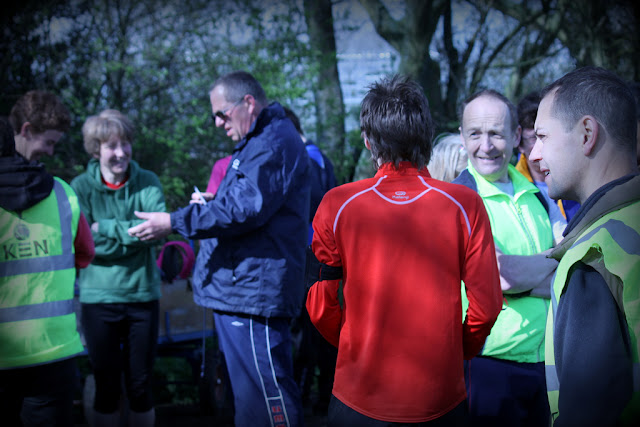 It took a while to recover, but once I had, I took a photo of the finish area to use as my #parkrun photo for the day using instagram. The official photos were taken by Pete and Nicki, the rest of the set is well worth a look. It's over on the Riddlesdown flickr page.

After that I stood with Chris and had a chat while we clapped and cheered the other runners as they made their way along the final straight. 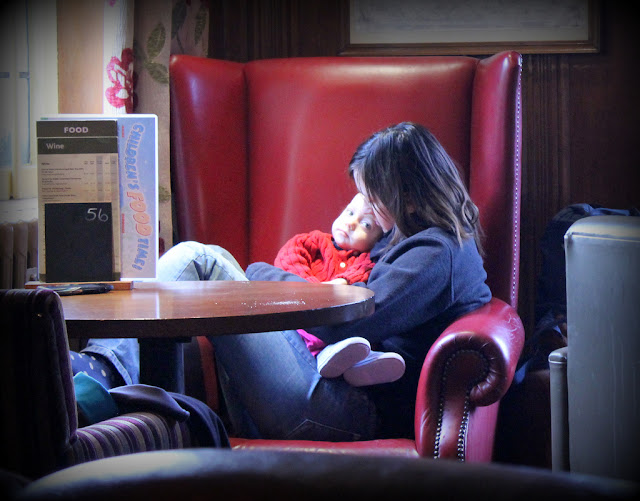 Once all runners were home, we proceeded to the Horseshoe for the usual coffee and results combo. This week there were some awesome chocolate brownies, made by Fiona, to nibble on. Then lots of F1 chat with Chris. We didn't stay for quite as long as the last few weeks and were back in the car by just after 2pm.