I have ambitions to be a bit of a parkrun tourist, but that is quite difficult to achieve when you are also trying to maintain a streak at your home event.

Yesterday I maintained my streak at Riddlesdown at the bank holiday Monday jubilee event. For the bank holiday Tuesday I had a choice of events to satisfy my urge to tour, in the end I picked Nonsuch parkrun. The reasons were that firstly it was the closest additional event to home and secondly quite a few other Riddlesdown runners were also taking part or supporting or photographing!

The theme was red, white and blue. I did my best by wearing my red 50 club t-shirt, some blue swimming shorts (pictured), and mrs7t's long white football socks (also pictured). Lime had blue trousers, red and white leggins, and her little union jack flag (all also pictured). Mrs7t was also in red white and blue - wearing a shirt containing all three colours (sadly, not pictured). 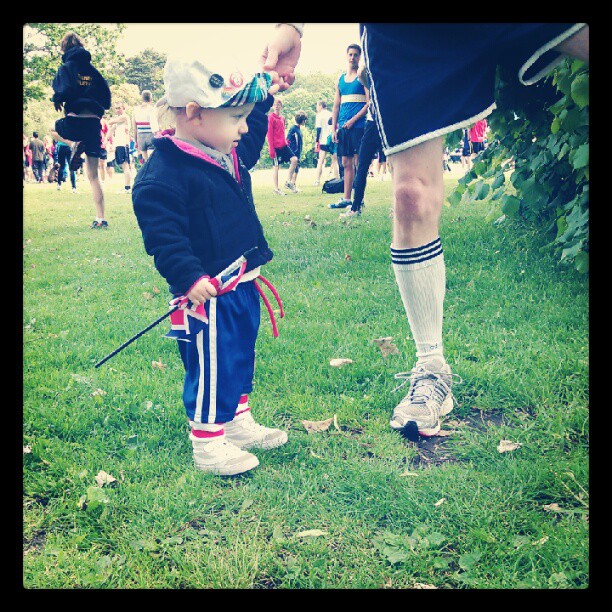 The journey was straight forward, if not a little dull - too many nondescript roads. Anyway, that aside, we arrived at Nonsuch park in good time, quickly found the start area, and then a whole bunch of familiar faces from Riddlesdown.

Lime had decided to spend some time with me and, as usual before a race, won't even let me out of her sight to pop to the toilet. So I headed off to find the toilet with baby in arms. We found them and whilst inside, bumped into Danny from the parkrun show. A quick hello and we went about our business, as planned - which mostly means Lime asking for copious amounts of toilet roll to chew on (don't ask, she's done it for as long as I can remember - she is obsessed with it!) and me sounding like I'm talking to myself inside a cubicle as I chat away to her.

With that sorted we headed back outside, where I found Terry ( @rencestar ) and family! We headed over to run HQ and loosened up the legs.

There were a very large amount of runners and the start was very congested. However, we had decided to make it a bit of a social run so it didn't cause us any problems. 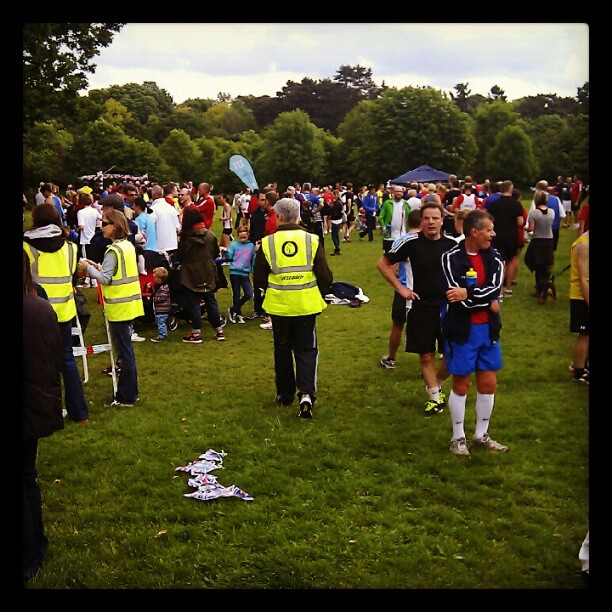 I probably wasn't paying as much attention as I usually do to the details of the course because we were chatting so much, but I remember mostly being on a path at the beginning, then the path became tree lined. Soon after we left the path and ran on some grass, through a few holes in hedges, over a tiny bridge and back around to the start area. Then we did it all again.

At around 4km we saw a familiar figure up ahead, it was Jo Quatrill. So we chatted to her for most of the next kilometre. Then at the end we spread out slightly, with me bringing up the rear.

I was given position token 307. In the end there were 459 runners in total - By far the largest attended parkrun I have ever run at.

Being such a well attended event meant that there was a very long queue to get my barcode and position token scanned. This was fine as everyone was in good form, chatting away, and before I knew it I was right at the front of the queue.

Then I felt something on my arm - I looked down and found some kind of bug that had its fangs dug into my flesh. I brushed it off and am now waiting to see if I get the same kind of red bump that I got at Riddlesdown a few weeks earlier - I'm guessing that it was another one of those parkrun bugs! 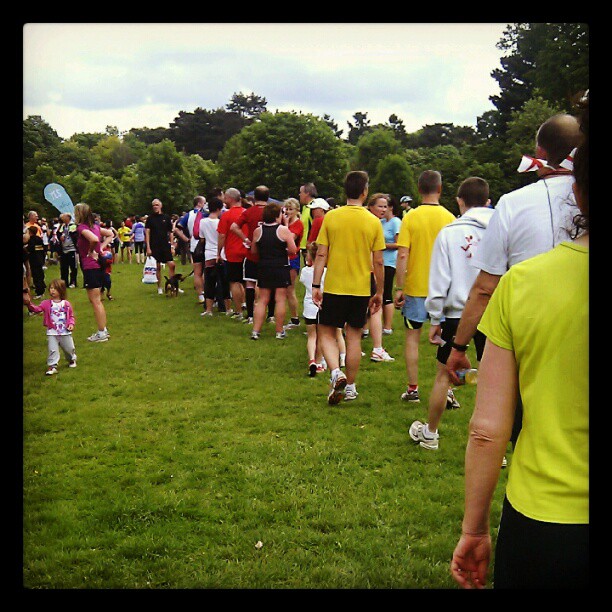 We hung around for a while after, then went to the cafe but with it being so packed we changed our minds and headed back to the car. We thought we could pop into the Costa on the nearby High Street, but once we had found a space to park in we looked around only to discover that Lime had fallen asleep, and we couldn't justify waking her up.

We decided to head back home to Tonbridge - It only took about 50 minutes or so to get back. Once there we popped into the pub for a veggie brunch, it was just like the old days when I had first started running at parkruns.

For the parkrun record, this was my fifth different venue and my 57th parkrun.