We were in Tonbridge doing the handover for the flat we had lived in for the past three years and had decided to have a take-away with our friend before heading back up to our temporary residence in Central London. Time flew by and before we knew it I was checking the internet to find out when the last train to London was due to leave. The answer was 23:17. The time at that moment was 22:55, we were not ready to leave and the walk would be at least 20 minutes. We got ready as quickly as possible (remember there is a toddler involved here too) and started to jog down towards the station - we had 15 minutes.

At the half-way point of our walk-jog I had to stop to pick up my mountain bike which I had chained up earlier. The toddler was strapped to me in the baby carrier and wasn't a fan of me running with her on board, however there was no choice. Further down the high street, as I was jogging the bike swerved and fell underneath me, crashing into my ankle in the process. Luckily I managed to stay upright.

A few minutes later we arrived at the station. According to the clock we had missed the train, but fortunately it was running late and was still there. We threw ourselves on-board and 45 minutes later arrived back in London.

The reason I had to tell the story of Friday evening is because I had originally planned to do a buggy parkrun this weekend, but as we had such a late night I didn't think it would be fair to drag the toddler out of bed at 7am the following morning. So on parkrun day I got up, got ready and left the house alone (it felt weird to go without the ladies).

At this point I didn't really know exactly which parkrun I was heading for. All I did know was that I was heading North. There are a batch of parkruns that all involve a fairly similar journey - Highbury Fields (which I have already run but is listed as bespoke on my record as it was a special event), Finsbury, Ally Pally, Grovelands and Oak Hill.

I took the Jubilee line to Green Park and then had to make the decision. I was early enough to reach the furthest of the batch but had not really checked the route from the station to the park in enough detail to do that. I eventually settled on Finsbury parkrun. 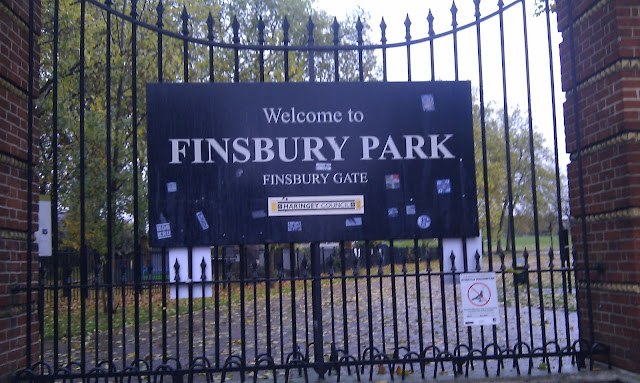 I arrived at the park at 8:30am and had a walk around. It is a nice looking park with meandering paths leading off in various directions and a road (but closed to traffic) that runs almost around the perimeter - this forms quite a large chunk of the route of the run.

At 8:45 I was standing roughly where I thought the start would be but there was no sign of any volunteers or signage. I wandered some more and bumped into two runners - they would know, right? Wrong - They were also new to Finsbury parkrun and were hoping that I'd know. Together we walked over to the cafe and waited. 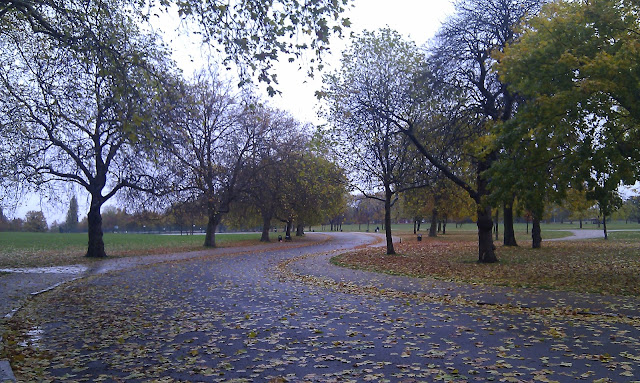 A few minutes later we saw another runner, she came towards us. I was hopeful that she would be able to help. As she reached us she asked if we knew where the start was - yikes - four of us were now standing there hoping that we were in the right place.

By 8:55 we were finally relieved to see some other runners, they all seemed to be congregating on the other side of the cafe. I took the opportunity to have a few minutes of light jogging before the start of the run. 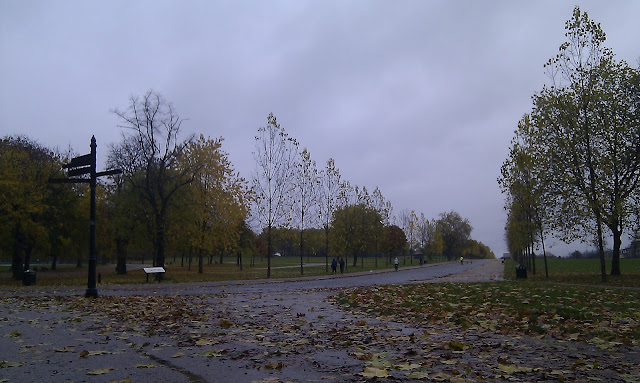 This was the first parkrun I have been to that felt like a flashmob. Usually there are volunteers setting up in advance but here even the organisers just appeared at the very last minute. It is a complete contrast to what I am used to at Riddlesdown parkrun and interesting to see how both styles can work equally well.

At the start line the usual formalities took place and we were off. It was at this point that I noticed that I was having a GPS failure. My running app on my phone was working but couldn't find any satellites. In the end I just had to hit start and hope that it would record at least part of the run. 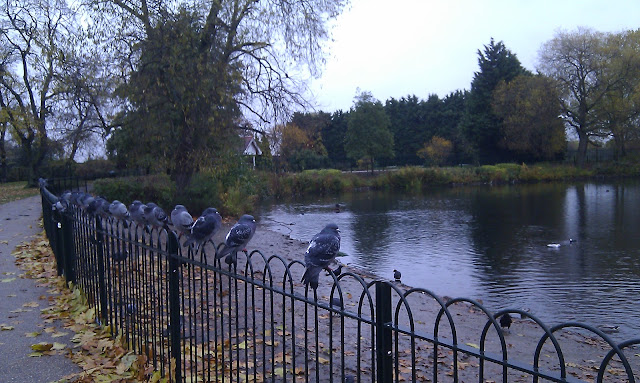 The run starts on the road on a slight downhill then swings to the left and you run along a slight incline. It soon levels out before swinging onto the park's paths, you hit a short steep incline, hug the perimeter of the lake before rejoining the road to run the final lap.

The weather forecast was for heavy rain but actually the rain was only very light during the run. The temperature was slightly warmer than the last few weekends and I decided to run in just my t-shirt. 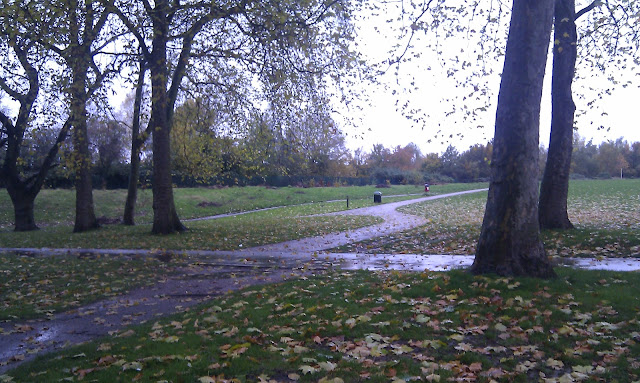 During the run my GPS thingy managed to find some satellites and recorded 4.5km of the run, much better than I was expecting.

After having my barcode and finishing token scanned I made my way back down to the tube station and was back home by 10.05am. I almost went back to bed but instead decided that breakfast would be a better option.

Update: I revisited this venue almost five years to the day after my original visit and wrote a little more about the venue, you can read it here: Finsbury parkrun 396