There are still two days left until the 30 days of biking challenge starts but I already started my cycling streak on Good Friday so here goes with post number 2.. 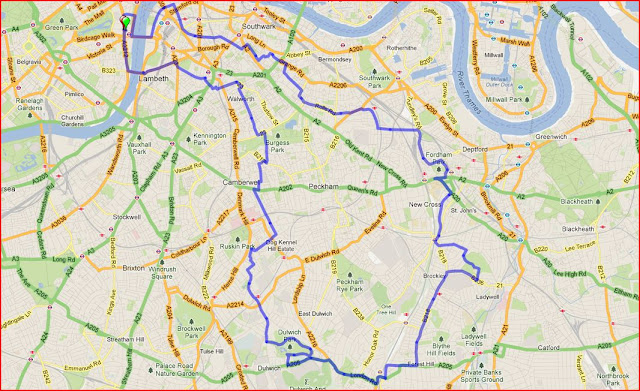 I would usually parkrun on a Saturday morning but as I am taking a(n enforced) break from running I decided to swing by Dulwich parkrun to see if they needed an extra volunteer. As it happens they had managed to fill all of their roles and I continued with my my ride.

To get to Dulwich park I picked up London Cycle Route 23 (which also crosses the Burgess parkrun course) and headed south. There is a section of route 23 that completely avoids traffic by cutting alongside some playing fields. This section was closed as it is being resurfaced so I had to find my way via an alternative route before picking the cycle route up again just before arriving at the park.

From here I cycled along the south circular and then across to Hilly Fields parkrun just in time to watch the final runners finish. I then continued my loop by heading towards New Cross, through Bermondsey and then up to Waterloo and back over the bridge to my finishing point in Whitehall.

I'm happy to report that there were no nasty incidents. However I did notice that a lot of vehicles seem to use the advanced stop line (ASL) (aka: advanced stop box / bike box) at traffic lights instead of the main stop line. I would have thought that it's pretty clear that these are for cyclists and I as a driver would never consider stopping in one of these so I don't understand why other drivers do so.