Before I get on with my review, here is what New Balance have to say about them -

“The 1080v3 is our premium neutral shoe offering runners comfort and protection in a lightweight frame. With N2 cushioning, ABZORB crash pad and a thin, light arch-securing FantomFit quarter the 1080v3 is a very high mileage neutral shoe.” 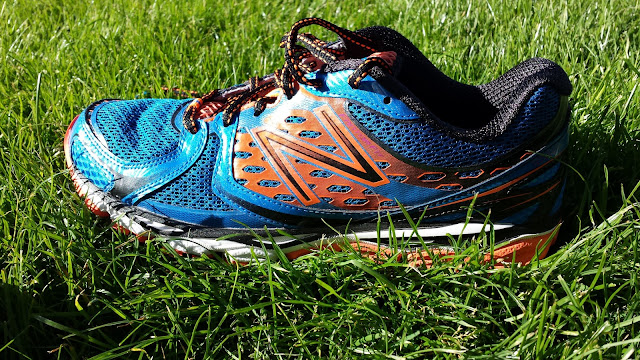 So what do all these fancy names mean?

ABZORB crash pad and Forefoot (“Our top of line foam. A superior blend of cushioning and compression set features with DuPontTM Engage® and Isoprene Rubber for the ultimate ride.”) 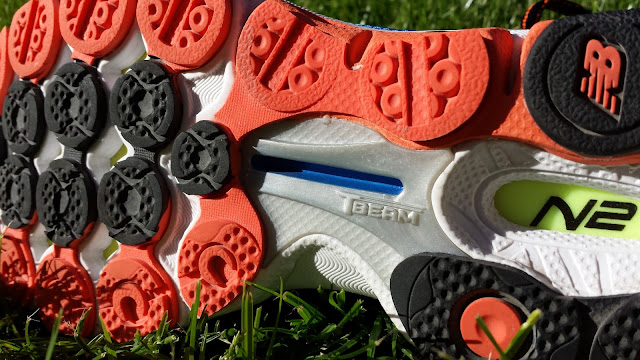 And the rest of the spec looks like this -

Price: expect to pay around £100 on the high street

When I went to the New Balance press day for the launch of their new range, the rep from NB did say that the current trend for colour schemes is for them to be on the louder side. While not the most garish shoe you'll see in this year's ranges, the blue/orange colour scheme that I have been sent certainly does stand out, and I have to admit that I am a big fan of this particular combination of colours. There are a number of other colour options including a much more discreet and primarily white shoe with touches of blue, a grey with red and a grey with orange (see below for this last one). For the ladies, the colourways are fairly similar but use shades more commonly found in the women's ranges, such as purples, pinks and lighter blues. 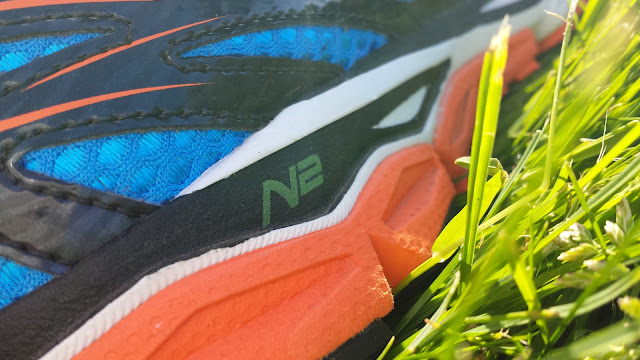 The shoe itself feels nice and light, and at 288g are a tad lighter than my current road shoes - the Adidas Boston 2. The sole is quite firm, but unless you're really into minimalist shoes you probably wouldn't even notice. Then again, if you were into minimalist shoes you probably wouldn't be considering these anyway. I'd say the stiffness of the sole is similar to other shoes that I have tried in this category.

Putting the shoes on, they feel cosy. Even though the sole is firm, the shoe itself is very comfortable - nice and soft. Possibly even a little bouncy. The upper is nice and soft and hugs the top of the foot nicely without being too tight. At first I thought the toe box felt a tad narrow, but then I realised I had been wearing my New Balance MT10's all day, which have a wider toe box. Now I've spent some time in the shoe, the toe box feels fine and is actually a much better fit than the Adidas Boston 2's that I had been wearing previously.

The heel-to-toe drop is something that interests me, and these come in at 8mm, which is right in-between the standard road shoe, usually around 12mm, and the minimal shoes, which tend to be 4mm right the way down to zero drop. Over the last couple of years I have tried various different drops and thicknesses of soles and my feet feel happiest at around 8mm with some cushioning, which makes these pretty much perfect. 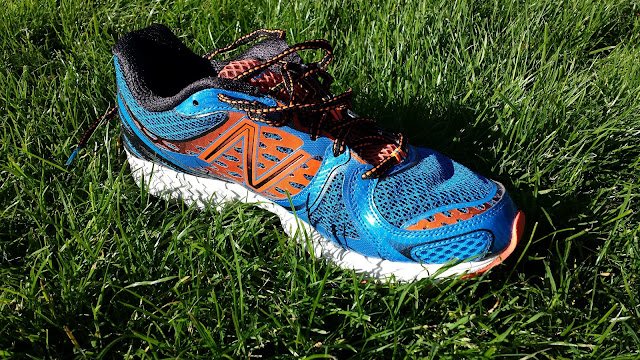 I've been running in these since May 2013 and I absolutely love them. I can safely say that these are the best running shoes that I have owned to date. If it wasn't for the £100 price tag I would go out and buy a second pair this instant. The test pair that I was sent is in a size 9, which is probably slightly on the large side for me, however I have managed fine with them (I just wear thick socks). I have subsequently tried on an 8.5 in a running shop and I find that is a better fit for me. In standard everyday shoes I usually buy an 8, so you might find you have to go up half-a-size larger in order to get the best fit. 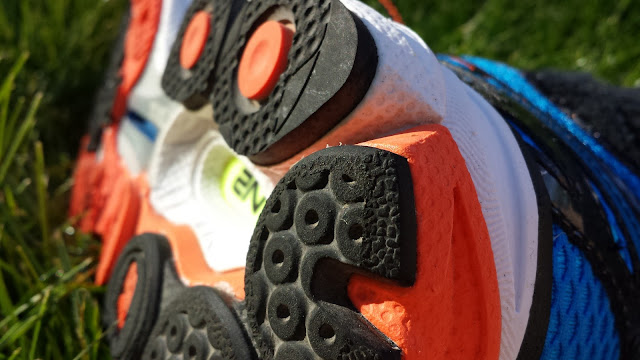 After two months of using these shoes they have become my go-to shoe. I haven't even considered wearing anything else for any of my road runs - My Adidas Boston 2's have been sat in the back of the cupboard ever since the 1080's arrived. I haven't had a huge amount of running shoes over the relatively short period of time I've been running, but these are without doubt my favourite.

Update January 2014: I like them so much that I have wanted to buy a second pair for ages, and it just so happens that they were reduced from £100 down to £69 in Sweatshop's January 2014 sale, so I finally picked up that second pair (in an 8.5). These are a slightly different colourway which I like even more than the original pair! 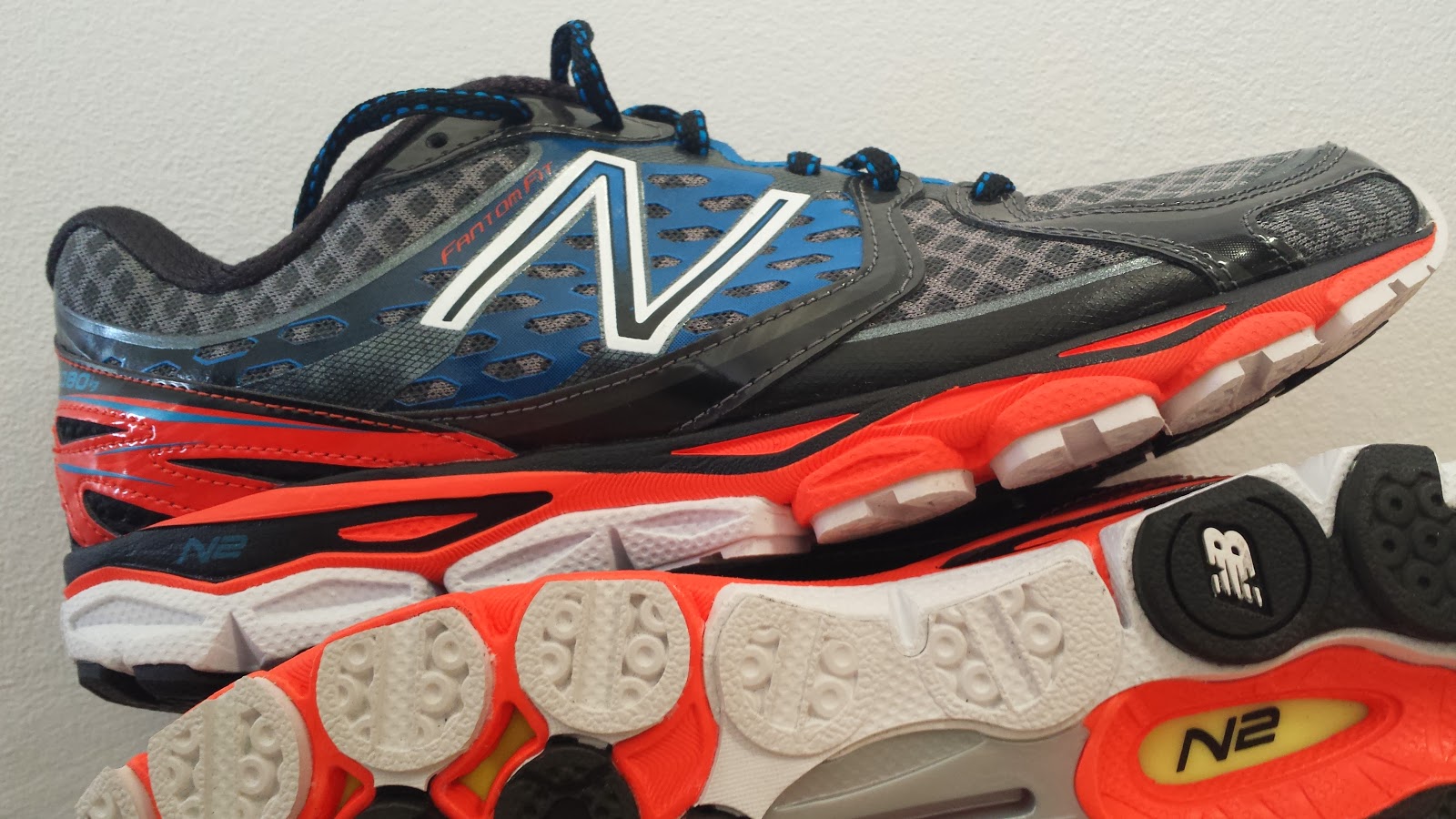 Disclaimer: These shoes (the first pair) were received free of charge and I can confirm that the views here are entirely my own.