I wouldn't mind betting that if you asked a selection of random parkrunners which venue they would most like to visit 'Bushy' would appear more often than most. The reason for this is simple - Bushy Park is the home of parkrun. It is the place where it all began back in when the first ever Bushy Park Time Trial was held back in 2004. 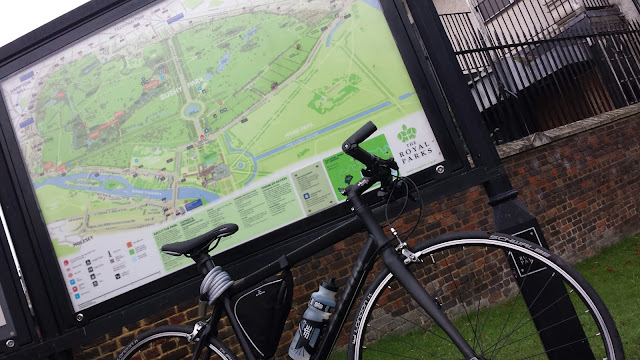 Fast forward 9 years and Bushy parkrun is now the registered home venue to over 23,000 parkrunners - fortunately they haven't all turned up on the same day! Even so, it is the most well attended venue attracting over 800 runners every Saturday morning - Sometimes this figures tops 1000!

This was my twelfth visit to Bushy Park - The other eleven visits have been on the first Sunday of every month to volunteer at Bushy Juniors parkrun, where after being a marshal and the photographer I finally found my calling in my role as barcode scanner. 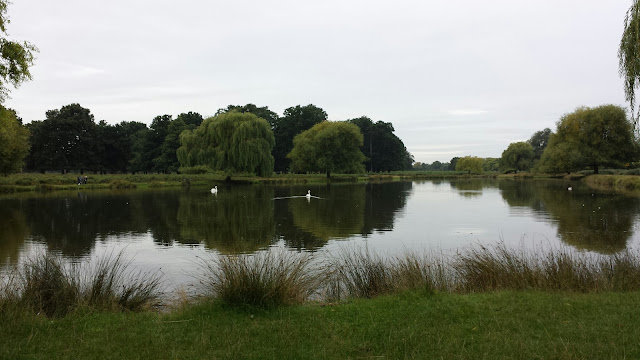 Anyway, the park covers a vast area of land (1,100 acres). It is home to Teddington rugby club, Teddington hockey club (field hockey was apparently invented here) and four cricket clubs. There are woodlands and ponds and formal plantations and wildlife areas - the list goes on. It is definitely worth spending the whole day here. There are also herds of Red Deer and Fallow Deer - They were quite visible and the stags were being quite vocal on the day I ran here. 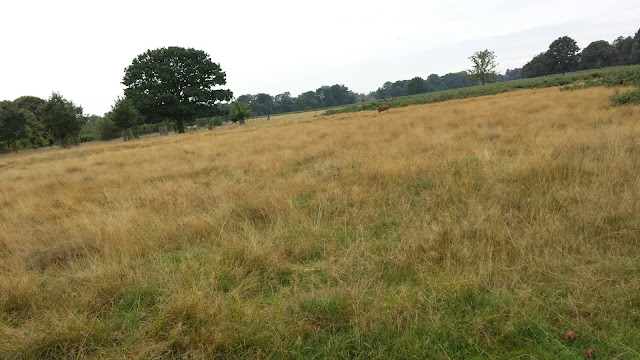 I decided to cycle the 21 kilometre journey from Westminster and, as I left at 6.45am, I arrived at about 7.50am. As I was so early I had no trouble finding a space to park my bike. The most obvious place is the set of bike racks in the car park near the Diana fountain, which is in between the start and finish of the run. However, if it is full there are some other options, you could use one of the tree protectors, which are protecting most of the smaller trees in the park. Alternatively you could use one of two sets of bike racks over near the children's playground. A final option would be to use the bike racks over at the Pheasantry cafe, and if you are going to stay for the post-run social would be ideal. 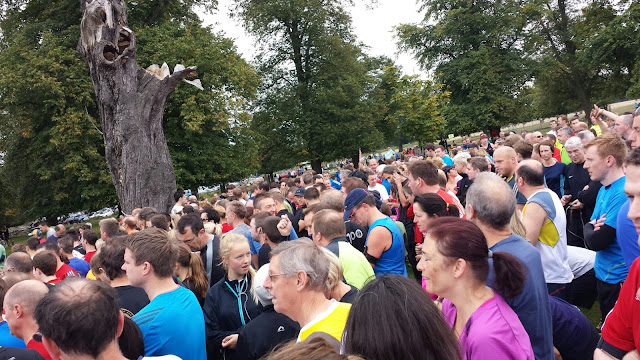 For those that drive you have the aforementioned car park - personally I would avoid driving unless you really have to. The queue to leave the park did not look like fun. If arriving by train you'd be heading for either Teddington or Hampon Court stations - I'd say the although Teddington station is technically closer to the park, Hampton Court is probably a tad closer to the start/finish area. 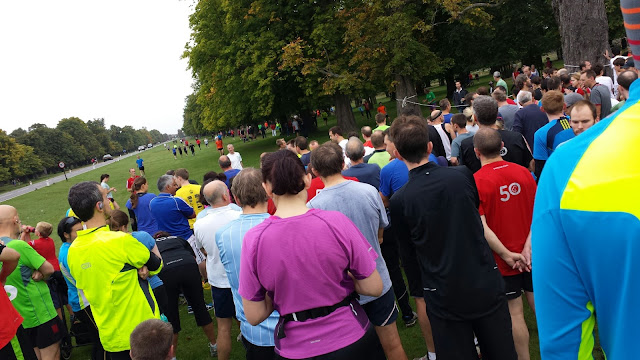 Considering the vast number of people that run here and the relatively modest size of the toilet block, I had imagined a queue going as far as the eye can see. But on the day I ran here there was nothing more than the usual level of customers in the toilets, which are located just a minute or so away from the start/finish. 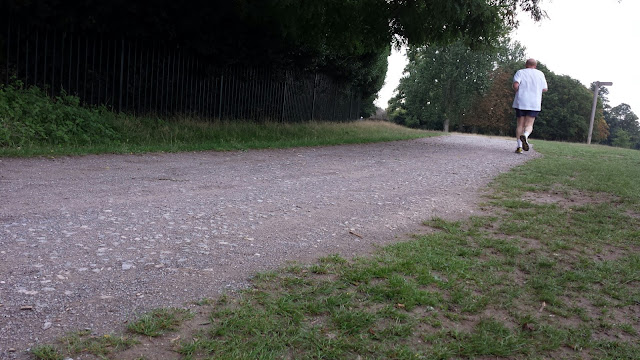 I suppose you could call the course a one lapper, but as it doesn't join itself at the end it's more of a point-to-point with the two points being very close but separated by the road and the car park. It is a flat course and starts on the grass adjacent to Chestnut Avenue, just opposite the Diana fountain, and by 9am it is just a sea of people nervously waiting for the pre-run announcements. 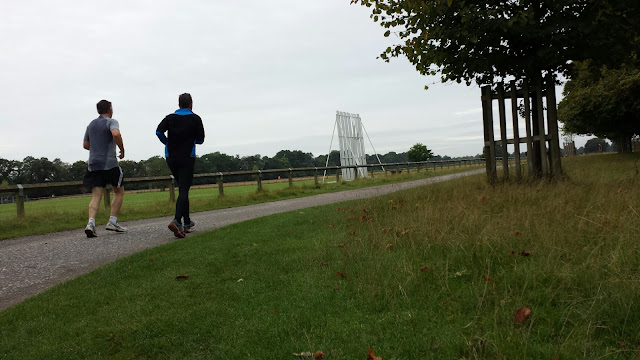 There's a buzz in the air as the announcements take place and then you hear the line that you've been waiting for 'timers, are you ready?' Seconds later, hundreds of runners are jostling for position along the wide grass start straight. Fortunately this wide straight opening section lasts for a full kilometre, giving plenty of time for runners to organise themselves into their own respective pace zones. 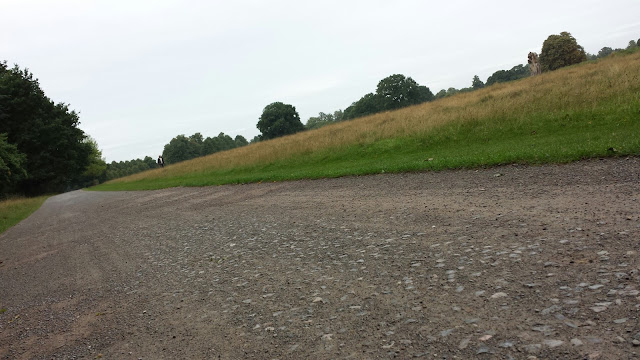 At the end of Chestnut Avenue you reach Teddington Gate where there is a right hand turn and the ground underfoot changes to a looser gravely surface. This is the perimeter path and you follow it all the way around the eastern half of the park. A little after two kilometres you pass Hampton Wick Gate and then shortly after, work your way around the cricket ground. 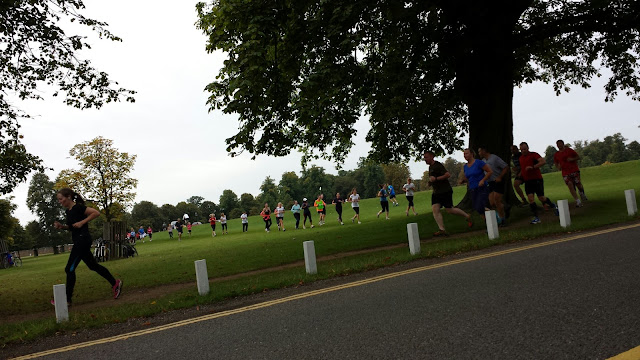 Once past the cricket ground you hit the three kilometre point and spend the next kilometre on a fairly straight path until you reach the toilets and playground. If you glance to your right you can see across to the finish area, but you still have a full kilometre to go! 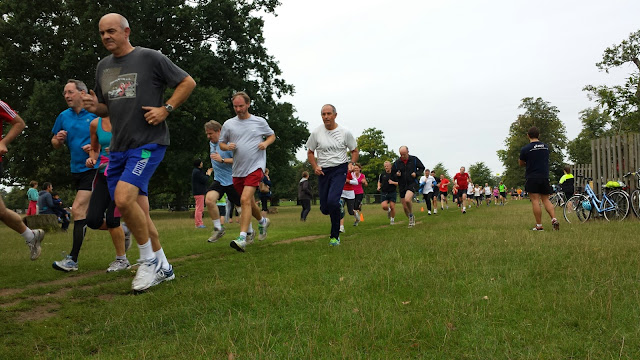 After the playground you turn left and are back on grass (or dirt, or mud depending on conditions) for the final kilometre push, after a couple of right hand turns you have the Diana fountain in your sights. There is a tree stump around here somewhere and a helpful marshal has a big sign to let you know which side to pass it on. Then you'll hug the grass verge next to the road until you arrive back at the entrance to the car park. A marshal will guide you around the outside of the last tree and the rest is a mad dash for the finish. 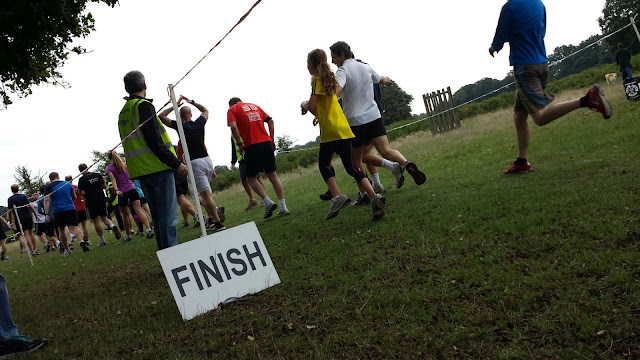 Once you've passed the finish line you'll soon come across Bushy parkrun's double funnel - It sounds scary and complicated, but all you have to do is listen to the marshals and you'll be fine. As I arrived at the double funnel I became the first runner of the empty one, so I was given a laminated sign to hold - I'm not sure what it said because I was focusing more on getting some oxygen than anything else. So when I reached the front I had to wait for the other funnel to empty before collecting my finishing token. It all worked really well and shortly after I had my barcode scanned in the usual way. 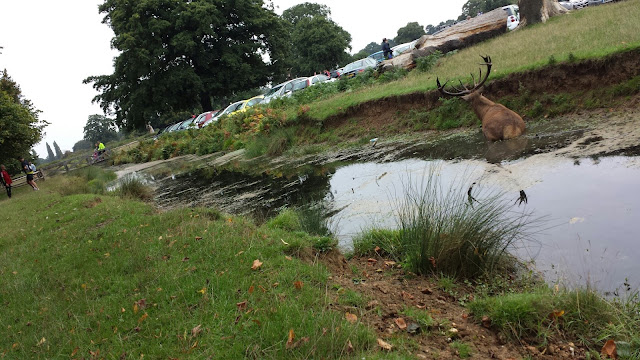 Given that there are so many runners you'd think that the course would be heavily congested. It is of course like this at the beginning but once you get through the first 1.5km or so it feels like any other fairly well attended parkrun.

I'm so pleased that I finally ran at the original parkrun venue and if you asked if I would come back, the answer, without a shadow of doubt, would be a yes.