Bracknell is a town in the county of Berkshire. It was first recorded in AD 942 as Braccan Heal which is thought to mean 'nook of land belonging to a man called Bracca'. As time went by this changed to Brakenhale and eventually reached its current form.
The town was originally a market village and part of the Windsor Great Forest. In 1949 it was declared a New Town and this is what lead to its growth. Originally this New Town was designed to house 25,000 people, but continued expansion has lead to it now having a population of over 80,000. 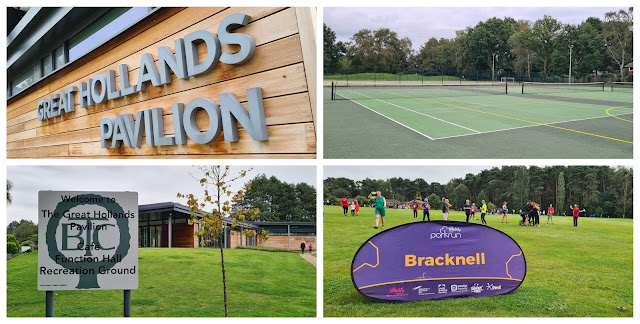 Like some other towns in this part of Berkshire, it has become home to a variety of company headquarters, many of these are in the technology business. So in Bracknell you will find the UK offices of Dell, Panasonic, Fujitsu, and car company Honda. Vodafone, Siemens and Hewlett Packard used to have offices here, but have since moved elsewhere. Historically the area was famous for its red bricks which can be seen in all their glory at the Royal Albert Hall, in London.
To the south of the town centre is the suburb of Great Hollands which is the medieval field-name of the Easthampstead parish area. It was developed towards the end of the 1960s to provide more accommodation for the workers at the town's then largest employer, Sperry, an electronics company who produced things like gyroscopes and other gyroscope-based aviation equipment. 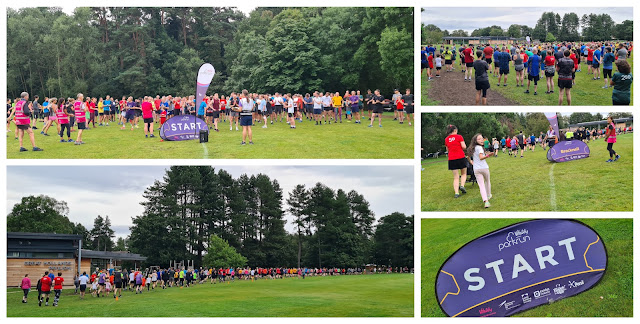 Interestingly the roads in Great Hollands are laid out in alphabetical order and are also apparently named after old telephone exchanges. The area also has a park and this is called Great Hollands Recreation Ground. It contains football pitches, a bowls green, tennis courts, and a cricket pitch. There is also a free-of-charge car park, but it's quite small and fills up quickly, so alternatively you could head to one of the side streets on the eastern side of the park. A final option would be to use the car park at the Golden Retriever Pub who have given permission for parkrunners to park here.
The closest train station is Bracknell, but it is approximately 4 kilometres away. I hear there is a bus (94) that runs from the station past the park. Like other New Towns, Bracknell seems to have a fair amount of traffic-free cycling routes (dedicated paths and shared use paths), so makes using a bicycle a good option for locals or for the connecting journey should you travel by train. There are some bicycle racks next to the tennis courts.
In April 2015 the park became home to Bracknell parkrun. From the very beginning this was a well-attended event with participation numbers hovering around 200. In the years that have passed, the numbers have gradually grown and it is now common to find in excess of 300 participants present every week. On a side note the park itself is listed under the postal town of Wokingham, not Bracknell. 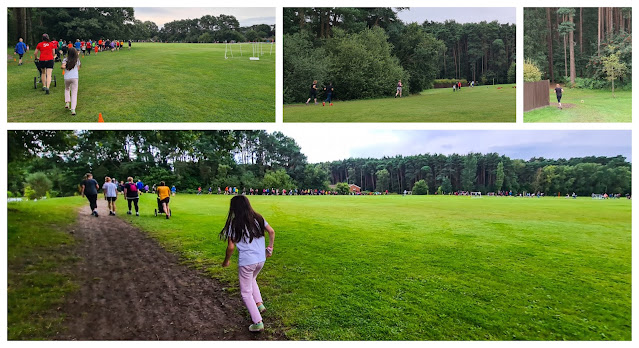 A newly redeveloped children's play area, wet play area and pavilion are located in the centre of the park. The pavilion contains a coffee shop, bookable function area and toilets. When we visited, access to the toilets wasn't possible until about 8.40am so it created a bit of a surge of people popping in just before the start. This slightly impacted on our pre-parkrun buggy running preparations, and we almost missed the start despite being in the park since about quarter past-eight.
The parkrunners generally seemed to congregate right in the centre of the park next to the pavilion, but the start and finish have their own separate areas. The event takes place over a two lap clockwise course (with an additional tail at the start) and underfoot features a combination of grass, dirt, tarmac, and wood-chipped forest paths. It is generally quite flat, but there are some ups and downs around the course. As we visited during the summer, I wore my road shoes, but at other times of year, or after rain, I would personally go for trail shoes.

The start is on the wide, open grass area next to the car park (please note: at the time of our visit, the official course map had the start point next to the tennis courts, I understand this is a post-covid change, so I expect it'll be updated soon enough).
This revised start area gives plenty of space to allow the participants to socially distance during the briefing, and then to spread out and settle into their positions once being set loose. 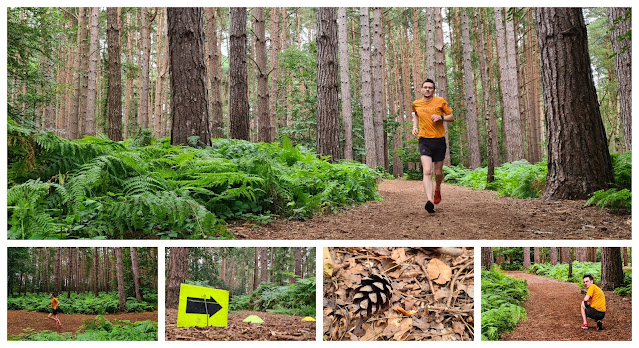 A large proportion of each lap is made up of following the perimetre grass/dirt paths around the edge of the southern and northern open grass playing fields, using the interconnecting narrower section next to the tennis courts to connect the two, but this venue also has an ace up its sleeve...
The southern-most part of the route briefly heads into Great Hollands Wood. It's a small, but stunning area of woodland which feels well established. The parkrun course follows the paths as they meander left and right through the towering pine trees. There is a small climb to negotiate half-way through the woods, but it's over quite quickly and it is followed by a longer, twisty slight downhill section. There are also quite a few tree roots to look out for - they had all helpfully been marked with flour by the volunteers beforehand, which made spotting them easier. The only downside for me is that this section was over too soon. 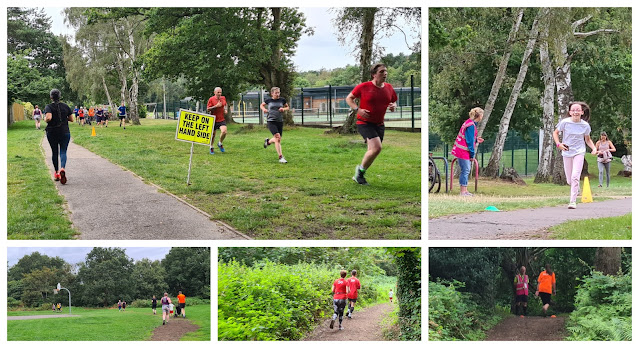 With the two-laps complete, the finish funnel can be found on the grass adjacent to the playground. My daughter had just had her 11th birthday a few days earlier, so took the opportunity to participate in her first 5k parkrun where she didn't have to be within arms reach of an adult, and she seemed to enjoy her first solo experience.
Once we'd had our barcodes scanned, we popped over to the pavilion where we had some refreshments from the cafe - the menu is not extensive and largely revolves around drinks and pre-packaged snacks, so you'd have to head elsewhere, like the Golden Retriever Pub if you wanted something more substantial (I hear they are now offering a post-parkrun brunch from 9am on Saturdays). Anyway, the playground is right outside the pavilion so we sat while our son played - just note, the playground isn't enclosed, so if you have children that like to wander off you'll have to keep your eyes very much on them.

The results for event 264 were processed and we received our notifications just before midday. There were 317 finishers which was very close to the official average number of 307.2. The GPS data from the day's event can be found on my Strava account, here: Bracknell parkrun GPS data (My Garmin failed so my wife shared her file with me). I also uploaded the file via the Relive app and created a fly-by of the route. You can find that here: Bracknell parkrun course fly-by video.
Many thanks, of course, to all the volunteers that made the event happen.
Related:
The Berkshire parkrun venues
Posted by copy7t at 22:22