In the London Borough of Havering you will find the town of Hornchurch, which has a population of around 65,000 people. The area known as The Dell is known for being the most southerly point in England that the ice sheet reached during the Ice Age 450,000 years ago. In the 12th century the land was gifted to the hospice of St Nicholas and St Bernard, Savoy. The name from their mother abbey, Monasterium Cornutun (Monastery of the Horns), was anglicised and this gave the area its name. 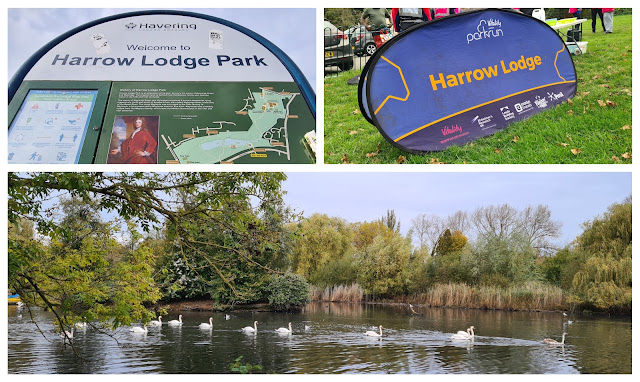 The ownership changed hands a number of times over the years and featured a number of farms. One of these farms was Harrow Lodge Farm and in 1936 the local council bought the 42 acres of land to develop into a park. In that same year, the company 'Richard Costain and Sons' were developing the Elm Park area which they had recently purchased, and part of the planning agreement was that they had to donate some of that land to the council. This was added to the previously acquired land and became Harrow Lodge Park.

The park continued the change throughout the years, with 60 acres being used to produce food during the Second World War. Following the end of the war, the development of the park could really get going. Cricket pitches and tennis courts were installed which lead to the park becoming a hub for sport. Children's play facilities were also installed and there was an 18 hole miniature golf course. 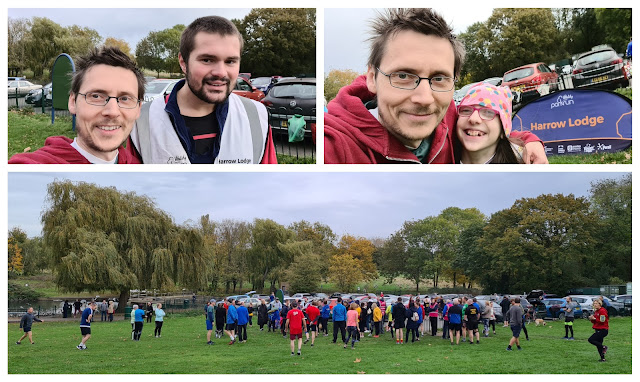 In 1954-56, The Ravensbourne (a tributary of the River Rom) which runs along the eastern side of the park, was dammed and this helped to form a boating lake. This still exists and is home to many lake-dwelling birds including a very large number of swans. Incidentally, it is said that a Manor House 'Maylards' used to stand somewhere along the northern bank (before the lake was there), but as so much earth was moved during the construction of the lake, it is unlikely that any trace would be found.

In 2013 the park became home to a free, weekly, 5km event called Harrow Lodge parkrun. I was there at the inaugural event and really enjoyed welcoming it into the parkrun world - you can read my blog from that day here: Harrow Lodge parkrun No.1. I revisited the park with my daughter on 6 November 2021 to take part in their 377th event - for those of you that are into the various parkrun challenges, this was one of my remaining Fibonacci Sequence numbers. 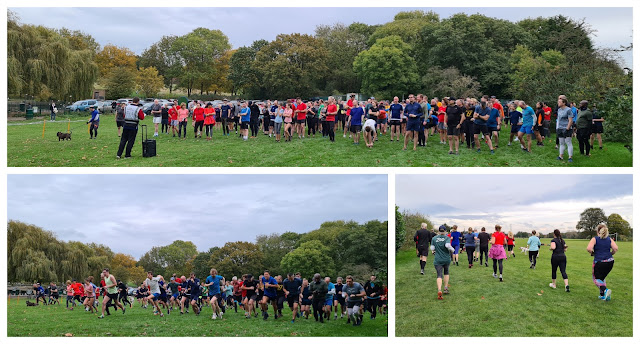 We travelled by car, and there are a few free options for car parking. The most obvious is the car park just off of Warren Drive - this is perfectly positioned for the start of the event and you should be able to use the toilet in the cafe from around 8.30am. There is another car park at the northern end of the park, and there are also toilets here, in the leisure centre. You'll just have a bit further to walk to find the start area. There is a third car park, this is right in the south-west corner and from what I can see will only hold about 15 vehicles.

If travelling by public transport, Elm Park is the closest tube station. Mainline rail isn't the best way to travel here as the closest options seem to be Romford or Upminster. If you happened to be bound by one of those you'd be looking to switch and continue the journey by other means. If you had the choice, Upminster would be easiest as it links with the tube line into Elm Park. The most convenient option for cyclists looking to secure their bike would be the fence that surrounds the Warren Drive Car Park. 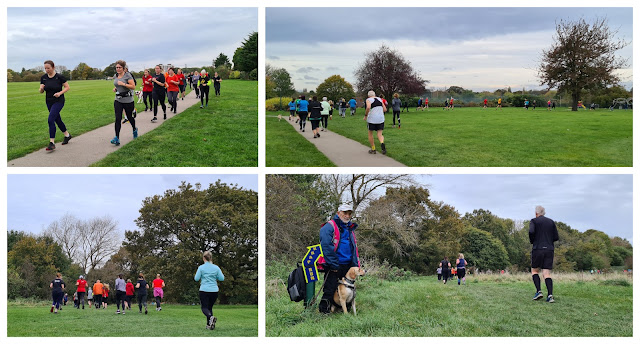 The parkrun takes place over a single-lap multi-terrain course and is best suited to trail shoes, especially in the winter or after rain. The split is approximately 4km on grass/dirt/mud, and 1km on hard paths. The profile is ever-so-gently undulating, but if you are putting in effort here, you may find that the terrain zaps the energy from your legs.
If it is helpful, you can view my GPS data and the course fly-by video by clicking on the links here or at the bottom of the page. 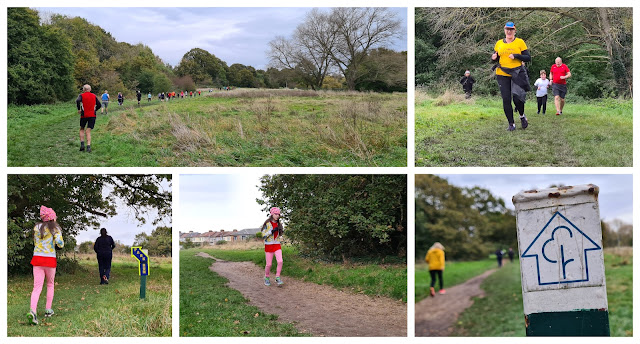 Just before 9am there is a first-timers briefing and I am pleased to report that after almost 9 years, this was as detailed and thorough as you could hope.

The main briefing was delivered by the day's Run Director, Rory Burr, who was part of my reason for re-visiting. Rory is a reader of blog7t and also writes his own blog, Rory parkrun fun - have a read! We've had many online chats over the last few years, so it was nice to finally meet face to face. He even gave me a mention in his briefing, and I'm sure there was a small reaction from the assembled crowd when he did so, so a huge thanks for that. 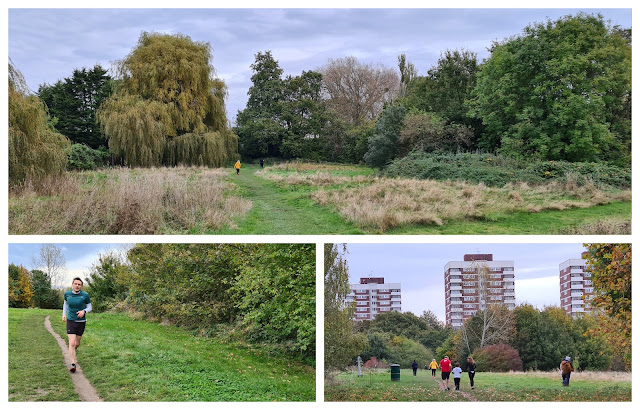 The course is almost the same as it was on my original visit with the only changes being some minor revisions here and there. It starts with a beautifully wide start area on grass which heads to the west past some football pitches before hitting a tarmacked path for a short while. Once reaching the tennis courts at the west end of the course, it goes back onto grass where it passes the fairly large children's play areas.

The course then changes to more of a trail run as it turns and heads eastwards through the park's conservation area, which lies to the north of the lake. Every now and then there are slight changes in gradient and subtle changes to the surface underfoot. The paths sometimes twist and turn, and you can't help but smile. We found plenty of wonderful marshals around the course, but also look out for the permanent 'park run' direction signs and for the parkrun logo on the short wooden posts. 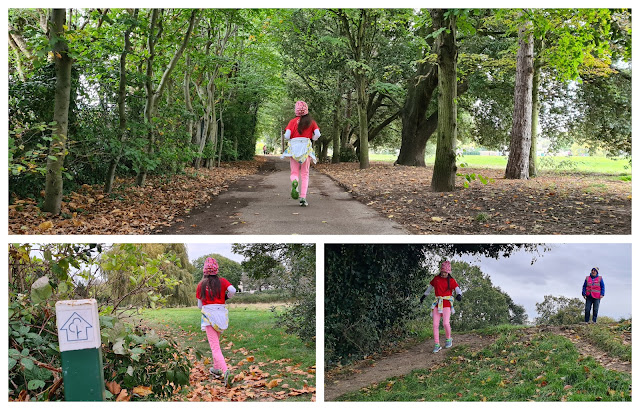 There is a short section on a tarmac path through an avenue of trees which is very nice, followed by some more twists and turns which slowly work their way to the north-east corner. Watch out for the short, sharp drop down a dirt (or mud) track when you reach the cricket field. If you have been here before, you may notice something is missing. The Sports Centre that was here when I first visited has recently been demolished. As you progress around the cricket field, you can see its glorious replacement the 'Harrow Lodge Leisure Centre' (my daughter was strangely taken by the strong smell chlorine in the air and now wants me to find her a chlorine scented candle).
Once a loop of the cricket field has been completed, there is another trail section. This one runs alongside The Ravensbourne. Again it is wonderful. At this point the course is heading back in the direction of the lake and upon reaching it, you can glance over and see the finish area. We bumped into fellow parkrun tourist Stephen Wright here and he kindly took a photo of us, which I have used in collage 9. Thank you.
At this point there is still a kilometre to go, and this involves heading back through the conservation area with all its beautiful, meandering paths.

As the course leaves the trail section behind, the lake on your left comes into view. All that's left to do now is to follow its banks around to the south side. The course now heads back on the opening grass area (but much closer to the lake this time) and although you can't see it due to the undulations, the finish is only a few hundred metres away. It then passes a building which sits adjacent to the lake - this is the cafe. Then the finish comes into view and before you know it, it is all over.

Scanning is completed very efficiently just after the finish funnel, and once the tail walkers cross the line everything is packed away and the team move onto the cafe. I have to say, I have never felt so overwhelmed with kindness, as we were invited over to the cafe for some post-event refreshments multiple times by pretty every volunteer we spoke to. Sadly we were on a tight time schedule and had to continue our day, so packed our shoes away and hit the road. 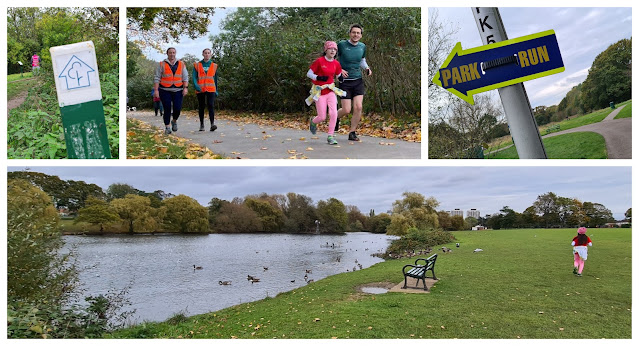 If you do go to the cafe, please note that payment is cash-only, so if it is your intention to visit, make sure you are organised in this respect. The cafe is also the place to head to if you want to hire a boat and spend some time on the lake itself. I hear there is also a secret garden in the park, but I didn't have the opportunity to try to find it.

We ended up over at Decathlon at Lakeside where I had to sort out some trail shoes for my daughter. Our results came through while we were shopping and there had been 168 finishers at event 377. Given the nature of the course, it's no surprise that the number of attendees is much higher during the summer months, so expect to find over 200 when the weather is at its best. The current official average number of finishers sits at 124.1, so even after all these years, it has remained quite a small and close-knit event. 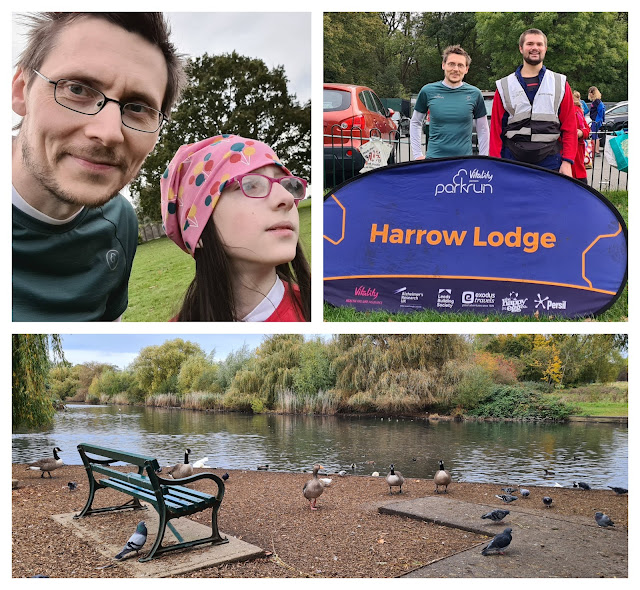 I'll finish off with a final thank you to all of the volunteers who turned a great event into an amazing one.