Swanley is a town in the county of Kent. It sits within the M25 but just outside the current-day border of Greater London. The town has existed at least as far back to the Domesday book, but was not recorded in it due to it being largely woodland and home to just a handful of households. The name is thought to have come from the words 'swine' as in pig and 'ley' as in 'a clearing in the woods', suggesting a link to pigs, but the exact detail seems to have been lost to time.

Swanley remained a tiny hamlet/village until, in 1861, the railway arrived. In the years following, it became home to a number of hospitals of which some were used by inner London patients who required some time in the countryside to aid recovery. The town also became home to the Swanley Horticultural College, and due to its new connection to the city, market gardens and orchards become popular. The modern day town is now home to around 17,000 people.

Over a period of around 15 years between the late 1960s and early 1980s, Swanley Town Council acquired various parcels of land to the north of the town centre. This included the grounds of the now-closed horticultural college, a former orchard and New Barn Farm. After some landscaping work, which included the construction of a lake, the area formally opened as Swanley Park in 1983.

The local council describe it as 'a green lung' which is 'the envy of many other local authorities'. As we live quite close to Swanley, we've been to the park many times and it's hard to disagree with them. The park's main features are all grouped together to create a central hub of the park. This central area includes a children's play area, children's splash pool, and the cafe and toilets.

However the headline attractions are the lake and the 7 1/4 inch gauge railway. The railway was opened in 1986 and runs along an 800 metre-long track around the western half of the park. It is usually open from Easter until the October half-term week, and when we visit during the summer, we always have at least one ride on it. It has a proper olde-worlde station building and also a turntable for the trains. The lake has pedalos and row boats available for hire, and we have taken these out on many occasions. If you look carefully you may even see the lake's resident terrapins.

There has been on-off talk in the local running community of setting up a parkrun here for as far back as I can remember, and I am delighted to say that in October 2021 the park finally became home to its very own free, weekly, 5km event called Swanley parkrun. It takes place over a two-lap course on a combination of grass and paths. It's largely flat but it is an undulating course overall.

It's not the only running event that uses the park. During the summer there is an annual midweek series of 1 mile relay races, called Swanley Relays, which I've entered a few times. My all-time 1 mile PB was set at the 2014 event. The park also has cross-country races during the autumn/winter. One is the Kent Fitness League and the other is the Kent Cross Country League. Bear in mind that the Kent League races take place on Saturdays so there's a possibility that the parkrun may have to cancel to make way for this.

The park has two car parks and parking fees are £3 for the whole day or £1 for up to an hour. The one closest to the parkrun start area can be accessed via the town centre, but is the smaller of the two. Please note: I have seen some information elsewhere that says the small car park no longer has a payment machine, so if you park here you will apparently need to pay via the Phone and Pay app. I didn't use this method, so can't give any more information.
A better option is to use the larger car park at the north-west end of the park. It is accessed via a narrow country lane to the north of the park. Payment can be made with cash or by contactless payment at the machine. I understand the app can also be used if you park here. I used my debit card and paid £3 at the machine.

Travelling by public transport is easy as Swanley train station is just on the south side of the town centre. There are also busses that stop in the town centre. Cyclists will find cycle racks located at both car parks. Once inside the park you will need to head to the meeting point which is just in between the small car park and the central hub area. If you need the toilets, they can be found just past the cafe, next to the children's splash pool. As a note, the toilets were not open when we initially tried to use them at 8.30am, but were subsequently opened following a request by some fellow parkrunners.

Just before 9am the first-timers briefing is held and this is followed by the main briefing. I missed these as I got caught at the toilets with my son and had a bit of a panic getting up the hill in time for the start (this also meant I didn't get my usual start line photos for this blog). The course here is a clockwise two-lapper but it has a really interesting configuration. It starts with an opening tail, then has an out-and-back, then a loop around the western grass area, then a loop around the eastern grass area. Looking at the GPS trace of the course, I can best describe the shape as a tied shoelace - have a look at my GPS data and the Relive course fly-by video to see what I mean.

The split of surfaces is approximately 2km on grass and 3km on a combination of stony and dirt/mud paths (with just a tiny fraction of that on tarmac/brick paths). If you're wondering what to wear on your feet, you really should go for trail shoes in the winter or if it is, or has been, raining, like it did during event 2. My wife took part with the running buggy and it was fine - the grassy and uphill sections were of course harder work but nothing to be overly concerned about.

To set the scene, the heavens opened at just after 8.30am and the rain fell until around 9.15am. This turned the course into much more of a cross-country-style event. Unusually for a parkrun, the event starts with a (short) downhill section - this is within a pleasant avenue of trees. On the first lap, the opening out and back can be a little congested as the path is not overly wide (it wasn't too bad at event 2 which had 105 participants). It is very important to keep left along here as once people hit the turnaround point, the two-way traffic increases the flow. Towards the end of the out section things can get a little muddier so watch out. You may notice the slightest of inclines as you head back along the back section.

The course crosses the level-crossing a number of times throughout the event, so watch your footing. However you don't have to worry about the trains because even when the railway is in operation, they don't start running them until 11am. This central area is a hive of activity throughout the entire event as there are participants approaching from all angles as they progress around the course. It's very much like the knot of the shoelace (except the participants don't cross over, of course). 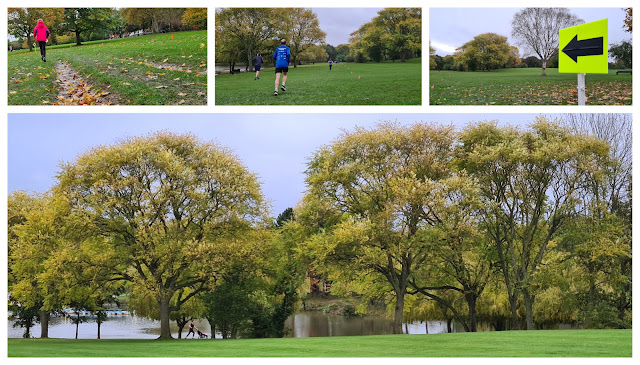 The western loop starts on grass and loosely follows the line of the railway track, it then transfers to a hard-packed stony path with occasional loose stones on top. This path naturally meanders back to the level-crossing where you pass through the central area (the knot) again and transfer to the eastern loop. I should mention that the marshals were very good, I was especially impressed with their clear instructions around the potentially slippery sections that had been made worse by the rain.

The eastern loop is largely on grass, and starts off by passing the playground and then the lake. It transfers to quite a loose, broken gravelly path (which could probably do with a bit of maintenance) as you head uphill for a stretch at the far end. When you reach the small car park you are at the highest point in the park and can take in the view towards the lake. You then drop back down towards the centre of the park and the full lap is complete.

At the end of the second lap, the route takes a sharp turn back onto the opening tail (now heading uphill) where the finish can be found. Barcodes and finishing tokens are scanned here. Strangely, the finish line wasn't connected to the finish funnel and there was this odd no-man's-land between the two. (you should be able to see what I mean in the centre-top photo in the collage below).
This may have caused some confusion, especially to newer parkrunners unfamiliar with the process. I had to direct the lady in front of me into the funnel afterwards to collect her finishing token. EDIT: This has now been resolved.

And with that, event two was over. After parkrun, we would usually hang out, get a drink, and go to the playground. However we were soaked to the bone and just wanted to get showered and into some dry clothes, so we headed straight back across to the big car park and started our short journey home.
We were already at home when our results arrived. Event 2 had a total of 105 finishers which is fewer than I would have expected, however I imagine the weather forecast played a part in the fairly low turnout. I finish off this post with a huge thank you to the volunteers.