In the county of Surrey is the picturesque, historic market town of Godalming. It is thought to have been inhabited since saxon times and subsequently appeared in the Domesday book as Godelminge. It is positioned on the main route between London and Portsmouth where it became a popular stop for stagecoaches, and this lead, in part, to its prosperity. The town's major industries have changed over the years, woolen cloth was an early one, but as the times changed, leatherwork and then papermaking become popular.
In 1881 it became the first town in the world to install a public electricity supply and this powered the street lighting. However due to various issues, the lighting reverted to gas after a few years. There is also a bizarre story from 1723 where a lady called Mary Toft fooled the town and doctors into believing she had given birth to rabbits. Her Wikipedia page contains a detailed account of it. I think I'll leave it at that. 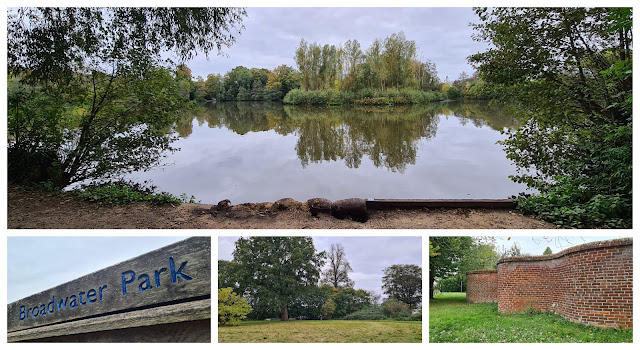 Just over a kilometre from the town centre is the settlement of Farncombe. It has a link to the Titanic in that one of the senior wireless operators was born here. He died on-board the ship in 1912, and he is remembered in a number of memorials around the town. After the ship struck the iceberg, he is credited with raising the alarm which lead to many lives being saved. However his Wikipedia page suggests that he was actually partly to blame for the collision by not passing crucial information to the captain. Worth having a read.

In Farncombe you will find the former grounds of Broadwater House, which was comprised of the house, parkland, a lake, stables and farm buildings. The house existed from the 1840s until the 1960s and was initially home to the Marshall family and subsequently the Price family. It has a strong historical link to cricket and part of the estate has been used for matches for centuries. 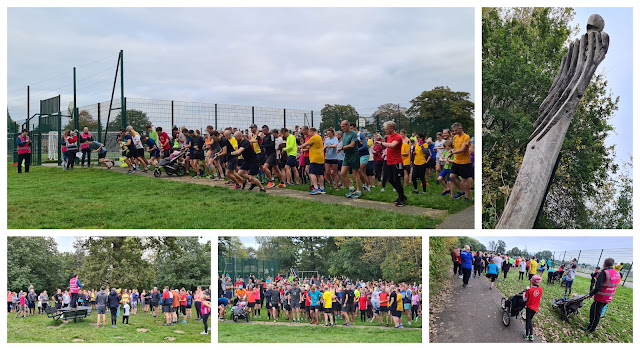 In 1936 the cricket playing field was purchased and gifted to the town. Putting two and two together, it appears that this has some connection with the King George's Field Foundation. Hundreds of open spaces across the country were renamed 'King George's Field' as a memorial to King George V following his death that same year. The 471 playing  fields in the scheme are legally protected and now fall under the guardianship of the charity 'Fields in Trust' (formerly known as the National Playing Fields Association [NPFA]). You can still see the original bronze plaque (or plaques, there should be two, but I only noticed one) on a wooden post at the entrance to the cricket field.

The modern-day park features the usual amenities such as a children's playground, tennis courts, basketball courts and toilets. Also within the park, you will find Godalming Leisure Centre which contains a gym, fitness studio and the town's swimming pool. There are two listed buildings within the park. The first is a 'crinkle crankle' wall which now surrounds Godalming Community Centre (see photo in collage 1). This type of wall features alternating convex and concave curves and is also known as a Serpentine Wall or Wavy Wall. They are typically designed to capture heat from the sun to assist in growing fruit. The second is the former dairy building.

The park is a central point for many of the town's sports activities and teams. Farncombe Cricket Club is based here, as are Guildford Rugby Club and Godalming Lawn Tennis Club. Godalming Town Football Club have a ground at the southern tip of the park. You will also find a building used as a rehearsal room for the local brass band 'Godalming Band'.

In 2021 the park became home to Broadwater parkrun. It is a free, timed, 5km event which takes place on Saturday mornings at 9am. Although the initiative originated through the running community, the parkrun events themselves are community events and open to all abilities so there is no need to even consider running if that's not your cup of tea.

If you drive to the venue, the parkrun parking arrangements are that Guildford Rugby Club (entry off of the A3100 roughly opposite the Citroen dealership) have agreed to let parkrunners use their car park for the duration of the event, but please bear in mind that the car park has a gate which will eventually be locked (it was still open at 11.15am when we were there), so if you are planning to hang around for significant amount of time post event, you may prefer to seek alternative parking, such as the Meadrow pay and display car park. The local side streets are free of parking restrictions, however it is requested that parkrunners do not use this option.

For cyclists, there is a large bank of covered cycle racks outside the leisure centre within the park. The town is on the main train line between London Waterloo and Portsmouth and the closest train station is Farncombe which is only a short (5-10 mins) walk away. However not all trains stop at Farncombe, so if you happen to alight at Godalming Station you'll have a longer walk of around 25 minutes.

There are public toilets within the park and these are positioned right next to the parkrun meeting area adjacent to the playground, however the sign on the outside says they officially open at 9am. Saying that, they were already open when we arrived at 8.30am, but it may be worth exploring the possibility of a toilet stop en-route if you need a guarantee.

Just before the start of the event, first-timers and general briefings are held, and after that the participants line up next to the Walter Bailey chainsaw carving of a figure. It was carved from a dead Oak tree in 2000. From here the participants are sent on their 5km journey around the park. The course consists of a clockwise loop of the cricket field followed by two full anti-clockwise laps around the park. Underfoot you will find a mixture of grass, dirt paths, and tarmac.

We had the running buggy with us and it was fine, but there are a few bumpy sections and also some exposed tree roots in places. As far as footwear is concerned, its ok in road shoes in the summer, but I went for my trail shoes because it was autumn and some mud was starting to appear. It is largely flat, but there are a few short, sharp ups and downs as you go around the course. Please also note that at time of writing they do not allow dogs at this venue, although it was noted in the briefing that this policy is under review.

After the initial clockwise loop of the cricket pitch (King George's Field), you head back through the start line, but in the opposite direction and off around the park following an anti-clockwise course. You will soon find yourself alongside the lake (Broad Water) which provides home to various species of birds and fish.
The course switches back and forth between grass, tarmac and sections on dirt/mud - the overall split is roughly 2.4km on grass, 1.5km on tarmac, and 1.1km on dirt paths. I found the course to be very well marked and there were marshals in all the right places. Also, look out for the Giant Sequoia tree which is on the route - it seems quite unusual to see these, so it was a fantastic sight! (I hear there are three of them in the park).

Upon returning to the main meeting area towards the end of the first full lap, you complete the loop of the cricket field, but now in an anti-clockwise direction. This is followed by an identical second full lap. Once back at the end you continue on the grass right into the finish funnel which runs parallel to the playground fence and zip line. Finish tokens are handed out at the end of the finish funnel and barcodes are scanned straight after.

At time of writing, there wasn't an official post-event refreshments venue listed on the main Broadwater parkrun page, but I understand there is a cafe in the leisure centre. However, we, along with some other parkrunners, went over to the car park near the rugby club where you should find a vintage Citroen Type-H van (built in 1960) which is home to Waffles and Stuff. You can get some light refreshments here including a nice selection of hot drinks and, of course, waffles. They even have a vegan waffle option.

After that, we explored the rest of the park, found the crinkle crankle wall, went to the playground (again), and also popped over the road to check out the level crossing which is just to the west of the park. By that time, the results for event 6 had been processed and we had received our results text messages. 251 people had taken part which was a new attendance record.
Given that my course description may be a little confusing, I would recommend having a look at my GPS data and the course fly-by video for a better visual on the course. Lastly the event couldn't happen without its fantastic volunteers, so a massive thank you for looking after us and making us feel so welcome.

Related:
My GPS data on Strava
The Relive course fly-by video
The Surrey parkrun venues
Posted by copy7t at 19:30