Charlton is a district in the Royal Borough of Greenwich, south east London. It was recorded in the Domesday Book as Cerletone and was also once known as Charlton next Woolwich. The majority of the area used to be woodland called Hanging Wood. It is purported to have been a hideout for local highwaymen, who would have targeted travellers passing through nearby Shooters Hill and Blackheath.
Nowadays the area is effectively split into two parts by the A206 Woolwich Road. The southern side is fairly hilly, mostly residential and contains Charlton Village. While the northern side (known as New Charlton or Charlton Riverside) contains a large out-of-town style shopping park, industrial buildings and auto repair garages. There's also a paintball centre and a go-kart track. You will also find the southern end of the Thames Barrier here. 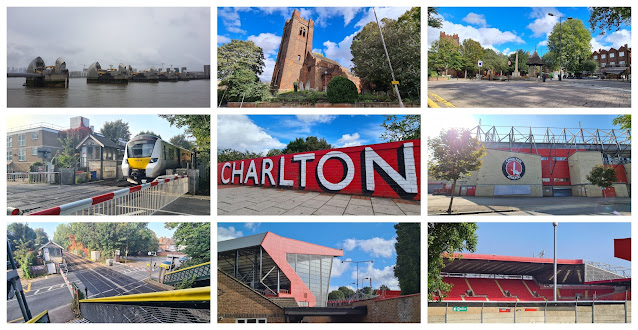 The area is (probably) most famous for its football club Charlton Athletic, and their stadium The Valley is built on the site of an old chalk pit. In fact over the years, Charlton has had many mineral extraction sites, and just one of these still exists in its undeveloped form, this is Gilbert's Pit which nature has reclaimed and is now a Site of Special Scientific Interest.
Right next to the pit, on Charlton Lane, you will find one of London's few road level crossings. There is actually a second level crossing in Charlton, it is pedestrian-only and has been earmarked for closure. At the far south of Charlton, where it meets Kidbrooke, is Charlton Lido, which features a heated Olympic-sized swimming pool. It originally dates from 1939, but fell into disrepair in the early 2000s. It underwent a £2 million refurbishment and reopened in 2013. 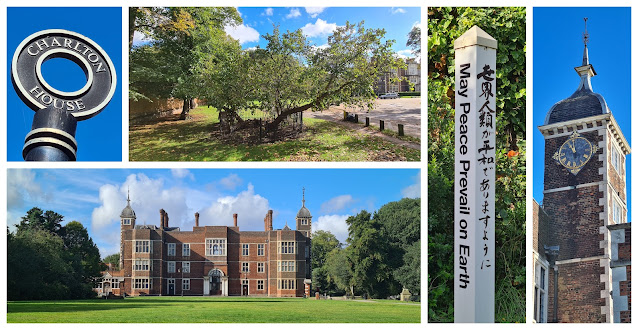 Charlton has a few historically important buildings in Charlton Village. The first I'd like to mention is St Luke's Church. There has been a church on its site since 1077, but the current building dates from around 1630 (with some modification carried out in later years). For me the most interesting thing is that it is the burial site of Spencer Perceval - The only UK Prime Minister to have been assassinated. This happened inside the Houses of Parliament in 1812.
The second is Charlton House, which is a Jacobean building constructed between 1607 and 1612. It was originally built for Sir Adam Newton (also buried in St Luke's Church) who was a tutor to Prince Henry. In later years, while under the ownership of the Maryon-Wilson family (relations of the assassinated PM's wife), the building had an extra wing added and this was designed by Norman Shaw (which gives the area another parliamentary link as the two red-bricked Norman Shaw buildings opposite the London Eye are currently part of the parliamentary estate). When the house was originally built Charlton would have been a rural hamlet outside of London, now of course it is part of the urban sprawl. The house and a portion of its original grounds still exist and can be found at the western end of what is now Charlton Park (opened in 1929). It is part formal gardens and part regular park and playing fields. The two sections are informally separated by a wrought iron fence and the remaining section of a 19th century ha-ha.
One of the oldest Mulberry Trees in the country grows here - it is thought that it dates back to around 1608 which would make it over 400 years old. It is one of 61 trees to have been given 'Great Tree of London' status. The story behind the tree is that it would originally have been planted as part of a project headed by King James I, who wanted to start a British silk industry. However, the seeds that were supplied were for black mulberry trees, and as silkworms prefer white mulberry trees, the project ultimately failed. 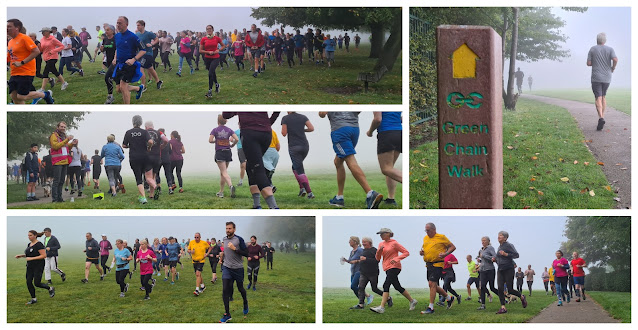 Over in the park's central and eastern sections you will find the usual municipal park features such as a children's playground, an AdiZone outdoor gym, skate park, space for 11 football fields, a cricket pitch, a cafe and toilets. The park features an avenue of Limes and is also part of London's Green Chain Walk and the Capital Ring Walk. The London Marathon blue start route uses the road along the north side of the park, while the red start passes to the south.
In October 2021 (incidentally on the same weekend as the London Marathon) the park became home to Charlton parkrun, a free, weekly, 5k event open to all. The parkrun takes place over a three-lap clockwise course largely around the perimeter of the park. Underfoot you will find about 4.2km on grass and 0.8km on tarmac paths, and the course is nice and flat (it sits on a plateau at the highest point of Charlton). 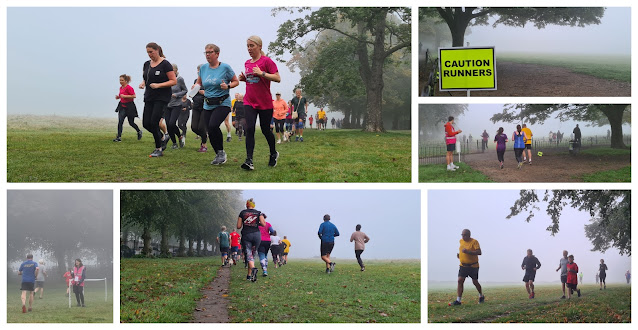 We visited the park to take part in event 2 and parked just off Canberra Road which runs along the south side - If you park as close as possible to the junction with Meridian Road, you'll be perfectly placed for the entrance that leads straight across the park to the start/briefing area. The majority of the residential roads on the south side of the park seem to be restriction free, but are quite narrow and space is at a premium. The roads to the immediate north are also generally restriction-free, but as they are close to Charlton Athletic FC, you may find restrictions are applied when they are playing at home (the exact timings may not affect parkrunners, but still worth checking the street-side notices).
Travelling by train is easy as Charlton Train Station is just a short distance to the north of the park where you can simply take a 10 minute walk up the hill to reach the park. There are also a number of local bus services which stop within a few minutes walk. Some bikes racks can be found next to the toilets/cafe, plus there's another set next to the playground. The toilets can be found at the north end of the park, just inside the park entrance opposite Charlton Lane. The parkrun meeting point is also close to this entrance. 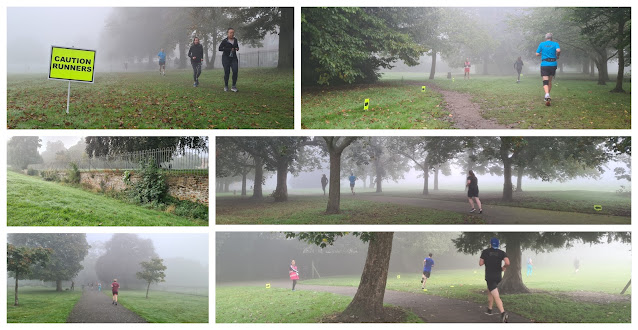 The parkrun lap is roughly rectangular and starts next to the skate park and table tennis tables, where it first heads along the grass next to the avenue of lime trees heading east. Towards the end of this section you briefly join the tarmac path, but within a few seconds the course reaches the north-east corner of the park and the route moves back onto grass. The eastern leg of the course is on an ever-so-gentle incline, some may find it virtually unnoticeable, but I could feel it while pushing the running buggy.
The eastern and southern sections feature a worn dirt path - it's only wide enough for a single person so you'll most likely end up using the grass at points. and this leads all the way up to the formal end of the park. Here the course weaves through some trees and returns to a longer stretch of tarmac path which runs alongside the ha-ha. At this point a glance to the left will give you the great view of the mansion (not so great when we visited due to the fog). The lap is completed by heading along the northern border on grass before another short section on tarmac which leads back to the avenue of Limes. At the end of the third lap, the finish funnel can be found on the grass back where the original briefing was held. Once I'd had my barcode and finish token scanned, I uploaded my GPS data to Strava, so if you want to view the course you can do so, here: Charlton parkrun GPS data. I also transferred the data to the Relive app where it generated a course fly-by video. That can be viewed on Youtube, here: Charlton parkrun Course Fly-by Video. Post-event the team grab some refreshments at the Old Cottage Coffee Shop. The results for event 2 were published shortly after and I see that 258 people participated.
And with that, the day's parkrunning adventure in Charlton was almost complete, so we headed into to the playground for a while. I can recommend walking out of the western exit of the park (past the mansion, you should also see the mulberry tree), crossing the road and finding the gap between the blocks of flats where you will see a fantastic view into the centre of London. We also wandered around the local roads to check out some of the interesting things I mentioned above. Also, I see that another tourist spotted a white squirrel, so that's another interesting thing to look out for! 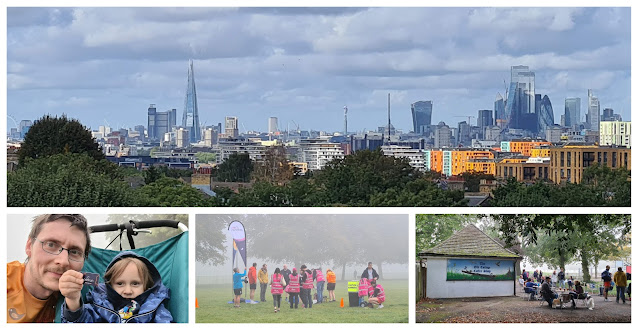 Lastly, many thanks to the volunteers that made the event possible.
Related blog posts:
The London parkrun venues
Posted by copy7t at 13:04