In the London Borough of Greenwich you will find Sutcliffe Park. It officially sits within Eltham, but its position on the western edge of the town sees it close to the centres of both Lee and Kidbrooke. I've had a look at some old maps and the area was previously known as Kidbrooke Green (1897), and Harrow Fields (1932) before the introduction of the Sutcliffe Park name in 1937. The name was taken from a Mr J Sutcliffe who was an engineer with the local authority at the time.
The River Quaggy flows through the park, but during development of the area in the 1930s, it was culverted where it remained underground for many years. At this time, the park was laid out as open playing fields. I played some football matches on these pitches in around 1987/88 when I played for a local team called Villacourt Rovers.

With the continued growth of housing along the course of the river during 19th and 20th centuries, the natural meadows which would have dealt with the flooding of the river had disappeared. The local town centres (most notably Lewisham) had become prone to flooding. It wasn't until the 1990s that the decision was made to restore the river and its flood plains within Sutcliffe Park to deal with the excess water. You can read a bit more about it here. With the work complete, the park was re-opened in 2004 and in 2006 was declared a Local Nature Reserve.
The park's most significant non-nature feature is its athletics stadium which is managed by a social enterprise called GLL under the brand name 'Better'. It has recently been renovated and features activities such as climbing, gymnastics, indoor BMX/skate park, soft play, as well as all the standard athletics club disciplines. Since 1954 the track has been home to the famous Cambridge Harriers Athletics Club who have consistently produced Olympic Games athletes over the years - a list of them is here. A former member of the club was Stephen Lawrence, who was murdered in a racially motivated attack not far from the park in 1993.

The rest of the park contains a selection of meandering paths and boardwalks which work their way around the meadows, river and water holding lake. There are also a couple of small play areas along with an outdoor gym and table tennis tables. At 9am on Saturday mornings there is now a free, timed, 5km event called Sutcliffe parkrun, and this was the primary reason for our visit to the park. The main meeting point for the start of the 5k is just outside the sports centre entrance in the south-western corner of the park (the area marked with 5, 6 and 7 on the map in the first photo collage).
As far as reaching the venue is concerned, if you drive you can park onsite at a cost of £1 per hour. The machine accepts cash or you can use the Ypay app or website. However there are only 32 standard spaces plus 5 disabled spaces. Alternatively there are some free on-street parking spaces on Eltham Road, which runs along the southern border of the park. If that is full, you'd be looking at the residential streets (which look restriction-free to me) to the south and south-west of the park for additional options.

If you cycle here you will find plenty of covered bicycle racks in between the car park and the sports centre. Lastly, if you use public transport there are a selection of busses that stop close-by. There are also two train lines that run close to the park. Both are served by Southeastern trains (SE Trains from mid-October 2021) running between London through to Dartford, and in some cases further into Kent.
The Bexleyheath Line runs past the north of the park and the Sidcup Line the south (I regularly use both of these lines during my commute to and from work). The closest station is Kidbrooke which is on the Bexleyheath Line, and about 1k away, or if you happen to be on the Sidcup Line, you can alight at Lee which will leave you an approx 1.5k walk to the park.

Once at the venue, you will find the toilets inside the sports centre, just next to the meeting point. The 5 kilometres are covered via a 3 lap clockwise route largely around the perimeter path and underfoot you will find a combination of tarmac and hard packed gravel. It's simple to follow and also nice and flat. It's perfectly fine for buggy running and wheelchairs. During this visit, the course was exceptionally well marked out with arrows in all the right places and cones marking exactly which paths not to follow. It's worth being aware that the north-west corner seems to contain some Horse Chestnut (Conker) trees and when we visited (early autumn) the path was covered in conkers.
As you head around the course, you may notice the new residential buildings to the north. This is known as Kidbrooke Village which is part of the regeneration of Kidbrooke. The land it sits on was formerly home to the Ferrier Estate, which was one of London's most deprived council estates until its demolition. The estate allegedly had terrorist links, the most high-profile of which was the failed shoe bomb attempt to blow up in US-bound plane in 2001. Before the estate was built, the land had been part of RAF Kidbrooke, which was an Royal Air Force training and storage facility.

Continuing around the parkrun route you'll see the pond which is home to many birds. If you're lucky you may see the resident swans or some of the other wildlife. The scenery is nice with wild meadows full of long grasses on either side of the path and there are plenty of clusters of trees dotted around.
It's hard to believe that this natural space was, just a few years ago, tightly packed football fields. The paths themselves vary in width with the narrowest being at the southern end of the park - this path is also quite noticeably cambered. After running along the southern border, the route heads north towards the centre of the park, before loosely following the curve of the running track round to complete the lap. This ensures that the vehicular entrance to the car park is avoided.

At the end of each lap, you head back down the original start straight and perform a loop around a tree to start the next lap. It's worth bearing in mind that by the time the faster runners are finishing, there will be parkrunners at three different stages of the event all on this same short section of path. So it's worth staying alert here. For the record, the three stages are; Those just finishing their second lap heading towards the turnaround tree, those that have just looped around the tree heading back, and those that are completing their third lap and heading into the finish funnel.
Finish tokens are handed out and then scanned here, and with that the event is done. The sports centre contains a cafe called Better Coffee Corner, so that's the place to head for some refreshments. They are a not-for-profit social enterprise with part of the cost of drinks going to the GLL Sports Foundation which provides support to talented athletes.

It's definitely worth going for a little wander around the park afterwards as there are areas in the centre that the parkrun route does not cover. There are a few wildlife installations that you may spot - these were created as a collaboration between IKEA and various UK artists. They are all made from recycled IKEA furniture and their intention is to provide homes for the local wildlife, such as birds, bugs and bees. Once we had done that the kids spent a bit of time in the playground, but then it started to rain so we headed off home.
At 10.30am our parkrun results came through. We had taken part in event number 4 which had a total of 174 participants. Being early in the event's history means it's still being visited by a fair number of full-time tourists and curious locals, so it's difficult to really know what the average number will look like long-term. 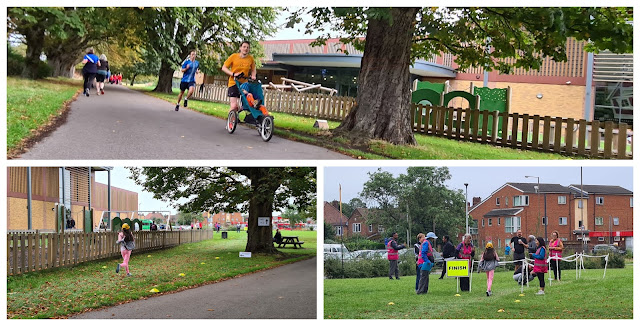