In the south east corner of Suffolk you will find the Suffolk Coast & Heaths Area of Natural Beauty  (AONB). It was originally established in 1970 to conserve and enhance the area. An extension in 2020 means it now also includes a slither of Essex. In total the AONB covers 441 square kilometres and stretches along almost the entire Suffolk coastline. Within the area you will find estuaries, marshes, meadowlands, lowland heaths, farmlands, historic towns and villages, ancient woodland and forests.

In the south of the area you will find a Site of Special Scientific Interest called Sandlings Forest - this covers several separate sites including Rendlesham Forest, which is the focus of this blog post. The main reason for the designation is that the forest supports some very important bird populations of nightjar and woodlarks. Surveys in the 1990's showed that the Sandlings Forest area provided home to 2% of the UK's nightjar population and 5% of woodlarks.
Rendlesham Forest itself is largely made up of coniferous tress, in this case Pines with the addition of several open heath areas. However the area has not always been forest; the initial planting took place between 1922 and 1930. Before this the area would have been vast open areas of heath and farmland - it is this type of terrain combined with the conifers that provides the ideal nesting ground for the nightjar and woodlark.

It is managed by Forestry England where certain sections are felled for use as timber. The Great Storm of 1987 wiped out over 1 million trees across the Sandlings Forest sites, and as a result the majority of the trees here date back to the late 80s and the early 90s. In the car park there is a plaque noting that a Sessile Oak was planted here by Michael Fish to mark the 10 year anniversary of the Great Storm. A time capsule was also buried close by and is due to be opened in 2087. (For those too young to remember, Michael Fish is the weatherman who famously dismissed warnings that a hurricane was on its way just a few hours before it struck in 1987).
In 1943 a section of Rendlesham Forest was cleared and became home to an airfield called RAF Woodbridge. The positioning of this was strategic as it gave damaged aircraft a safe place to land following raids over Germany during WW2. After the war the United States Air Force used it a base until 1993. The base was reactivated and renamed MoD Woodbridge in the early 00s and around 500 British Army personnel have been based here since 2006. 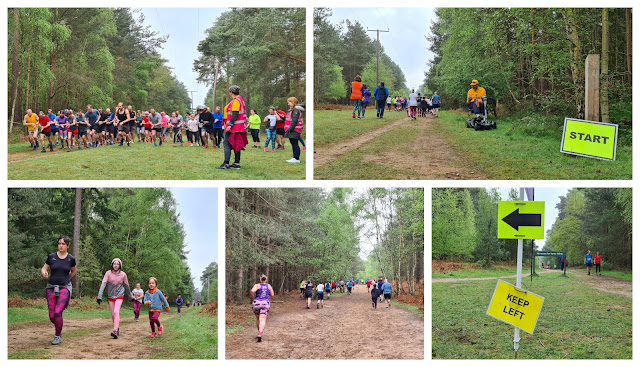 On 26 December 1980 Rendlesham Forest became the location of the UK's most well-known UFO encounter, now known as The Rendlesham Forest Incident (sometimes also called Britain's Roswell). USAF personnel witnessed lights in the forest and upon investigation encountered a triangular metallic craft hovering or resting on its legs in a small clearing. It had glyphs on the side and the report suggests a strong electrical pull coming from the craft which was warm to the touch. The witness also reported seeing binary code (0s and 1s) in his mind's eye.
The modern-day forest draws in about 100,000 visitors every year. It has marked trails which are popular with walkers and mountain bikers. There is a campsite here which usually operates from April until the end of October and this of course adds to the popularity. There are also numerous children's play areas and activities dotted around. We visited in May 2022 to take part in event 11 of Rendlesham Forest parkrun which has been in operation since 26 February 2022. For those who don't know, parkruns are 5km events, open to all abilities and there is no time limit (you don't actually have to run).

The forest has multiple car parks dotted around, but for the parkrun the main car park is the place to head to. It is the one directly opposite the camping ground 'Forest Camping'. Parking charges apply here and as of May 2022 there is a £3 charge for cars which covers up to 2 hours. Should you wish to stay longer a £5 charge will cover right up until closing time.
Should you arrive in a minibus or coach you'll need to cough up a flat fee of £10 (although the Forestry England website says something slightly different). Current options for payment are cash or card at the machine in the car park (next to the information hut), or you can use the RingGo app, but be warned the phone signal seems to be pretty poor here so maybe have some cash/card to fall back on just in case.

Travelwise this is not the easiest venue to reach using public transport. The closest bus stop is in nearby Butley, just over two miles away. The nearest train station is Melton which is about 3.5 miles away. There are some bicycle racks in the car park. There is also a small toilet block here which has male, female and accessible facilities - on the day we visited there were portaloos too, but I'm not sure if that is a permanent arrangement.
The parkrun meeting point is just next to the main car park with the start point being a little further along the path. Both of the briefings took place at the start point and at 9am sharp the event got underway. The course here is, as you'd expect, off-road so stick on your trail shoes for this one! It is largely flat but does have a short incline which you go up twice. The main thing to consider as far as underfoot is concerned is that there are numerous tree roots protruding on many of the paths. Also watch out for pine cones which were scattered almost everywhere. Another thing is that this area of the country sits on light sandy soil, and you will encounter some slightly sandy sections.

The advice regarding buggy running is to check with the core team before visiting, which I did via Facebook Messenger as I thought I might be buggy running (my four year old decided to take part on foot in the end). If we had used the buggy I think the most difficult part would probably have been the ever-so-slightly uphill section where the sandy soil is at its sandiest (you actually go up twice, as well as also down twice). My tip on this section is to stick to the left hand side on the way up, which seemed to be firmer part. The tree roots are of course the main safety concern. We would have been absolutely fine (we've used the buggy on much bumpier courses) but some people may prefer to avoid buggy running here.
The course itself is a difficult one to describe in detail. Nobody can be lapped and it is essentially a one lapper, however you do visit some sections more than once. If I tried to describe it, it'd be a smallish upper loop followed by a larger different loop which includes an out-and-back section. At the end of these two loops you run back through the start line. From here you head back along the beginning section of the first loop but this time you do a much larger loop that goes right up to, and along, the fence of the military base before returning back to the original meeting point next to the car park. So three loops which get progressively larger.

During the event you'll encounter wide forest avenues, dirt paths, sandy paths, pine cones, tree roots, stones, and even a concrete path (I think this was previously an access road to the airfield). Also look out for the occasional low hanging branch from the pines. I didn't encounter many dog walkers, but the ones I did had kept their pet on the lead which I thought was very considerate. Also, some of the trails allow horse riders and mountain bikers so keep an eye out for them, just in case. You'll be pleased to hear that there are signs, cones and wonderful marshals in all the right places so they'll keep you on track (big thanks to you all).
When the 5km is complete you enter the finish funnel and snake round through some trees and out into the adjacent open grass picnic area. This is where you'll receive your finishing token and then get scanned. The results were online a short while after and I saw that 87 people had taken part in event 11. The current average number of attendees is 100.9. Post-event the the forest does have a refreshments hut in the car park, however the owner does not seem to open until about 10.30am. I have heard that there are plans to build a permanent cafe here so I imagine that will eventually become the post-event social venue. We were covered as we had brought our own packed lunch.

Once I had transferred my GPS data from my Garmin, I used it to make a Relive course fly-by video so these two resources are probably a better way to get an idea of the course. Before, during and after the event I was fortunate to spend some time chatting to Rory Marriott who is part of the core team and also a former parkrun ambassador. He has overseen the successful planning and launches of many of the events in this area of the country and is as passionate as you could wish to be about parkrun and especially volunteering.
With the parkrun finished we turned our attention to the second of our planned activities in the forest. The UFO incident is probably the forests biggest reason for people to visit, and to make things more interesting they have installed a UFO trail through the forest. There are various play activities along the route, but the culmination is the full-sized metal sculpture of the UFO in the very spot the incident is said to have taken place. Despite the rain coming down in buckets, I thoroughly enjoyed the experience!

The forest also features four bowl barrows (burial mounds) which date from 2400-1500 BC. they have been classified as scheduled monuments. We didn't manage to spot them, but that does bring to mind that just to the west of the forest is Sutton Hoo which is an extremely important archeological site which you can visit. It was the subject of the 2021 Netflix film The Dig. Also worth mentioning is that the village of Rendlesham was once the centre of royal authority and Æthelwold who was king of the East Engles from c.654-664 resided here. There are so many other interesting things to do locally but of course we had to head home. Our day out in this small patch of Suffolk had been brilliant and I'll never forget it.
Related links:
The Suffolk parkrun venues
My GPS data from Rendlesham Forest parkrun
The Relive course fly-by video
My GPS data from our post-parkrun walk
Posted by copy7t at 11:17