On the south coast of England you will find the East Sussex town of Seaford. It has a population of around 23,000 people and is surrounded on all land sides by the south downs. It was once one of England's significant ports and was part of the Cinque ports as a limb of Hastings. The town has been raided numerous times by the French, and on a few occasions burned down. The town eventually got its own defensive fort known as a Martello Tower to guard against a possible invasion by France.
Seaford apparently once had an excellent natural sandy beach, however the construction of the breakwater in the harbour of the adjacent town of Newhaven caused issues with the supply of the sand. By the 1980s the sand had vanished with only boulders remaining. The current shingle/sand beach is the result of the dredging of 1 million tonnes of material from the nearby sandbanks and this occasionally has to be topped up.

In 1545 the western end of Seaford was the location of a battle between local people and a small French fleet that were attempting to land in Seaford Bay. The man who organised the defence and defeated the invaders was Nicholas Pelham and he was gifted a buckle by the King for use on his family's coat of arms. The buckle signifies self defence and protection - also referred to as 'victorious fidelity in authority'. The area has ever since been known as The Buckle. The sea front at this point is now the main meeting point for the town's 5km running and walking event called Seaford Beach parkrun.
We visited Seaford to take part in event 85 of the parkrun. Upon arrival we parked in The Buckle car park which is just across the road from the Newhaven and Seaford Sailing Club and this is where the parkrun starts and finishes. As a bonus the car park is free-of-charge and it also has toilets. If it happens to be full, there is plenty of additional free parking further along the seafront. For those arriving by train, the best place to alight is Bishopstone Station as this is just a few minutes away. Cyclists may be able to take advantage of the coastal bike routes but I couldn't see any proper bike racks.

The parkrun course is a simple out-and-back along the seafront. Underfoot is tarmac/concrete and as you'd expect, the course is flat. Shoe choice is simple here as it is road shoes every time. It is fine for buggy runners and I also expect it would be suitable for wheelchair users.
From the start the participants head eastwards along the seafront with the sea on their right hand side. Glancing over to the left you can see a building with a Martello Tower style circular turret - this used the be The Buckle public house but is now a private house and B&B, although bookings are currently suspended until at least 2023. Assuming they re-open it would be the perfect place to stay for the night before parkrun. 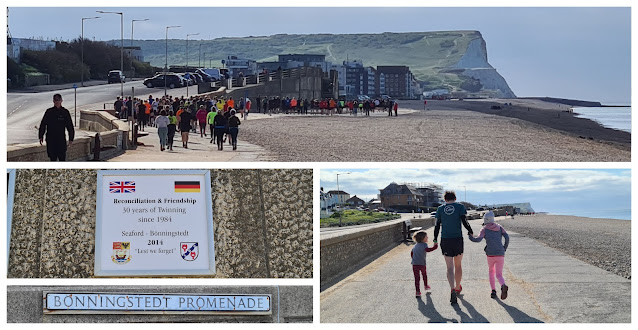 As you progress along the seafront, it was worth bearing in mind that some sections are mixed use, allowing people and cyclists to mingle. Also the beach is popular with dog walkers so you may encounter some loose dogs along the way. In the distance you can see the white cliffs at Seaford Head, quite a sight!
As you reach Bonningstedt Promenade a plaque on the wall commemorates the 'Reconciliation and Friendship' of town's twinning with the German town of Bonningstedt. There isn't a parkrun in Bonningstedt, however Alstervorland parkrun in Hamburg is only 13km away.
At around 2.3km, the course reaches the Martello Tower. This is the most westerly of all the Martello Towers on the south coast and this one is known as number 74. 103 of the towers were built in Britain and 47 of them were on the East Sussex coast, located in strategic positions between Rye and Seaford. Since being decommissioned the tower has previously been home to tea rooms which had a train carriage installed where the draw bridge once was and used the lower section as a roller skating rink. It is now home to Seaford Museum. 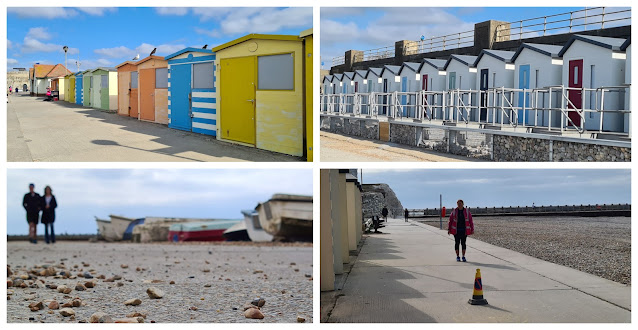 The parkrun route follows the pavement around to the left of the tower before immediately rejoining the main coastal path. 200 metres later there is a turnaround point, marked by a cone and a marshal. The return journey involves following the left hand path around the other side of the tower before continuing the journey all the way back along the seafront. You'll also see the occasional bank of beach huts, some with bright colours or quirky designs. Another thing to note is that sometimes the shingle/stones can spread onto the path, so keep an eye out for possible stony hazards.
The finish is in exactly the same place as the start and once you've crossed the line and collected your finish token, you can head onto the beach to get scanned. It was nice to see that one of the marshals has repurposed some of the old volunteer vests into handy finish token bags - this helped to solve a problem they had encountered with using buckets or tubs where the wind could blow them over, scattering finish tokens all over the beach. 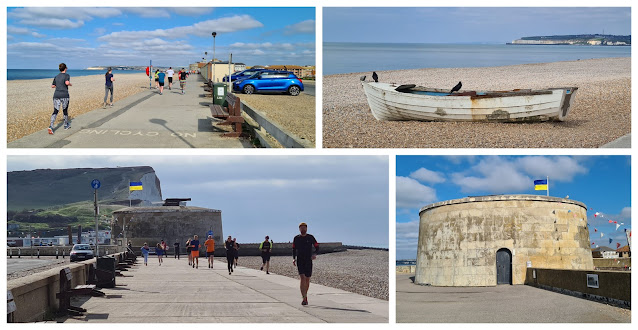 The results for event 85 were online shortly after the event had finished and there were 164 finishers. The current average number of finishers is 165.3 so we had visited on a typical week. We had also been really lucky with the weather, by that I mean it wasn't windy, which can sometimes be a feature of seafront events, and we had a decent amount of sunshine. The volunteers had been amazing, so many thanks for the warm welcome.
I had recorded the course using my Garmin so you can check out my Strava account if you want to view the GPS data. Also I used that file to create a Relive course fly-by video and you can watch that on my youtube channel. 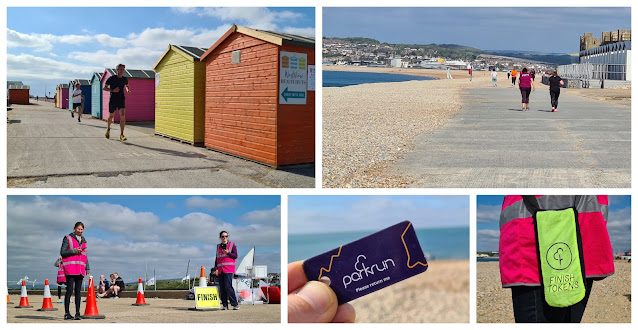 Post event we spent some time on the beach where the kids kicked off their shoes to have a paddle in the sea and we watched a ferry leaving Newhaven and spotted people partaking in various seaside water activities. After that we turned our attention to the Seaford Head cliffs. We moved the car to the eastern end of the beach where there is another free car park and more toilets.
Here we headed into Seaford Head Nature Reserve and climbed up to the top of the cliffs. From here we hiked four kilometres heading towards the Seven Sisters until we reached Cuckmere Haven before heading back for an 8km round trip. By the time we returned to the car we were exhausted but had worked up an appetite for our well-earned ice creams (vegan Magnum for me). 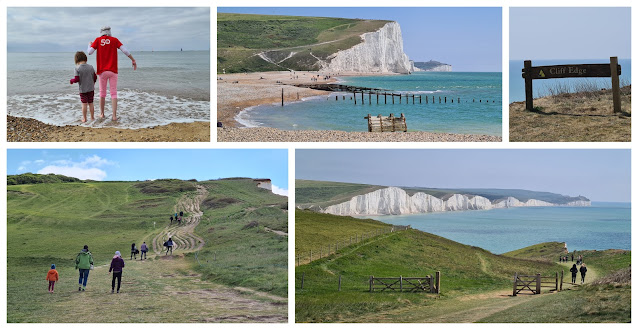 We'd had a brilliant and exhausting day out at Seaford - I'm glad it was a bank holiday weekend because I needed the extra day off work to recover!
Related links:
The Sussex (East and West) parkrun venues
My GPS data from event 85
The Relive course fly-by video
Posted by copy7t at 13:00