Littlehampton is a seaside town located on the south coast in West Sussex. It was recorded in the Domesday Book as the hamlet of Hantone, but had also been recorded elsewhere as Hanton. The town developed initially as a fishing community and then as a port. The ownership of the area has largely sat with the Duke of Norfolk, who also holds the title of Earl of Arundel. This is one of England's oldest surviving Earldoms having been created in c.1138 and the Duke of Norfolk is the most senior Peer in the Peerage of England. A tradition which was written into law in 1627 is that the holder of Arundel Castle is automatically the Earl of Arundel. In fact the port at Littlehampton was known as Arundel Port around the 18th century. It's name eventually became Littlehampton and it is thought that this was to distinguish it from the larger Southampton which is just to the west. 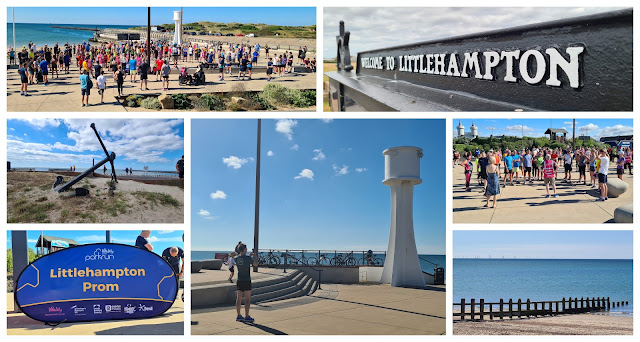 The town is located on the mouth of the River Arun which flows through the town. The area was susceptible to attack by the French, and in 1760 a battery was erected on the river's east bank to add some protection. In 1854, to protect against a new threat from the French, the more substantial 'Littlehampton Redoubt' (commonly known as Littlehampton Fort) was built on the river's west bank. The fort is still standing but is now best described as an overgrown ruin. The east bank was also home to Arun Mill, which was one of the largest windmills ever built in Sussex.
The 18th and 19th centuries saw Littlehampton also start to develop as a holiday resort and in 1863 the railway came to town when Littlehampton Station was opened. By the 1920's the holiday resort had become known as The Children's Paradise. In 1932 Arun Mill (windmill) was demolished to make way for an amusement park owned and run by Billy Butlin. This was subsequently bought by the a family called the Smart's in 1977 and the name changed to Smart's Amusement Park. It is now called Harbour Park, however I gather that you may still hear some locals referring to it as Smart's. The amusement park is situated right next to the mouth of the River Arun and part of it sits on the rampart of the 1760 battery. The reference to the Windmill still lives on in the name of the cinema (formerly a shelter hall and a theatre) and a pub, both next to the amusement park. 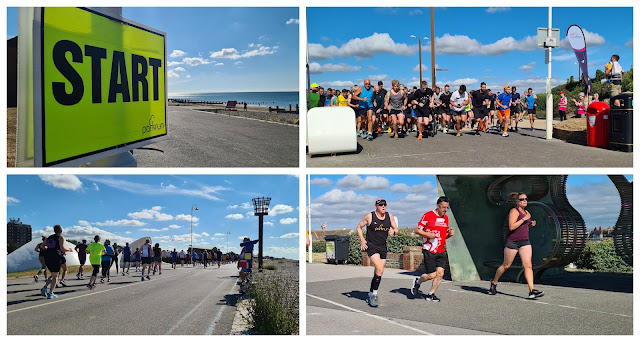 The East Bank is now the location of the town's free, weekly, timed, 5k event, Littlehampton Prom parkrun. We visited on a gloriously sunny day in July 2022 and parked in West Green Car Park (which is on the East Bank). The car park fees can vary depending on the time of year, however if you are visiting for the parkrun and then leaving straight away the charge can be reasonably cheap (see the Arun Council website for info). We had decided to turn our parkrun visit into a day out so we had to pay the full day's fee which was £11, which to me seemed eye wateringly expensive. The full day rate is considerably cheaper during the winter. If you are a little more organised and don't mind a longer walk you may be able to find some free parking further inland on the residential streets in the town.
Travel is of course possible by train to Littlehampton Station which is the terminus on the main line running from London Victoria via East Croydon, Hove and Worthing. The onward walk to the parkrun meeting point is approximately 0.8 miles (1.3km). There is also a Stagecoach bus, number 700, which stops near the train station, so the walk will be about the same. For cyclists I saw some bicycle racks over near the car park. There are toilets and these are located in the area in between the car park and the seafront. I understand these toilets open at 8am all year round. 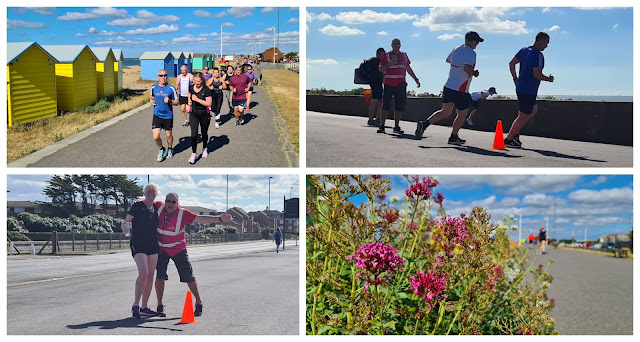 The parkrun meeting point is on the seafront right in the corner next to the river mouth and amusement park, One of the best visual guides is to look out for is the white tower, which I understand contained (or maybe still contains) a light (it's a lighthouse) to mark the entrance to the River Arun / Littlehampton Harbour. It may be known as Littlehampton East Pier Lighthouse or Littlehampton East Pier Range and from what I can see it dates from 1948. Also look out for the former coastguard station with a tower that apparently had a gun mounted during the Second World War. It is located right at the start/finish line and is now apparently a unique holiday rental home called The Little Lookout (imagine waking up here and going to parkrun).
As you may have guessed by the name, the parkrun takes place on the prom. This is a double out-and-back course along the seafront. It is completely flat and underfoot is 100% tarmac, so road shoes are the ones to go for all year round. Buggy runners and wheelchair users would be absolutely fine on this course. As is common for seafront venues, it can suffer from harsh weather conditions at times. On the day we took part there was a headwind on the 'out' leg. Fortunately that meant that the 'back' leg had a tailwind. However it was so hot that the breeze was quite a welcome addition. 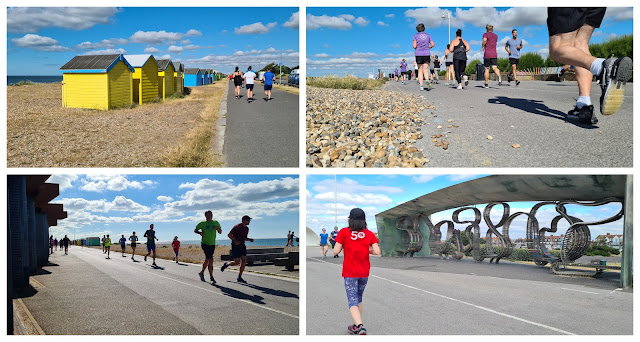 Heading out from the start, the course immediately passes the former coastguard station followed by the bank of shops which sell fish and chips, ice cream, donuts and all sorts of beach-themed items to the hoards of people that gather here in good weather. Glancing to the right you may be able to see the Rampion Offshore Wind Farm. This consists of 116 wind turbine generators which generate 1,400GQh and is enough to provide power to 350,000 homes. The wind farm and associated infrastructure was constructed between 2015 and 2017. It first started generating power to the national grid in November 2017 and by April 2018 was fully operational with all 116 turbines running.
While heading along the prom the parkrunners keep to their left, this ensures that everyone can pass safely as outgoing and returning parkrunners start to interact. Look out for The Long Bench. This bench is 324 metres long and is made from stainless steel and 9,000 wooden slats. It weaves its way along the prom, sometimes twisted and looped within the shelters that form the two ends of the bench. It is the longest bench in the UK and it can theoretically seat around 300 people at any one time. 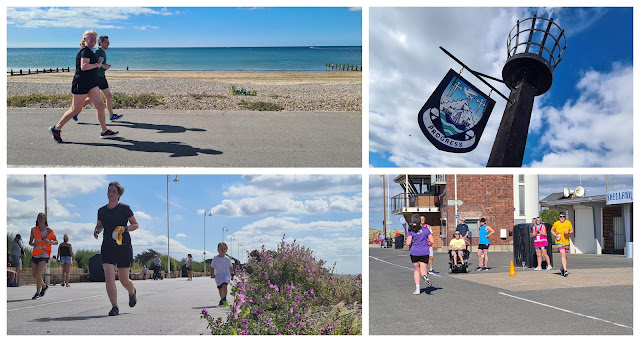 Towards the eastern end of the course there are brightly coloured beach huts nestled in small batches on the beach. Watch out along here as there are benches which protrude onto the path. On the opposite side of the road you will find Littlehampton Miniature Railway, which dates from 1948 and runs on a 12 1/4 inch gauge line. This gauge is apparently extremely rare and there are only six in existence with Littlehampton being the oldest. The line is 800 yards long and has two stations Norfolk Road and Mewsbrook Park.
Before long the turnaround point is reached - it is marked with a cone and a marshal. The return leg takes you back along the same path, again keeping the left. On the return leg you may encounter stones on the path as these can spill over from the adjacent beach. Look out for the Littlehampton Beacon which is on the beach, it was lit as part of the Queen's Jubilee (2012) and Platinum (2022) celebrations beacon lighting events. The Littlehampton Urban District Council coat of arms hangs alongside the beacon. It features a Martlet (a mythical bird without feet that never roosts) in between the cross-crosslets from the Howard family arms (Edward Fitzalan-Howard is the current Duke of Norfolk). The ship represents the fact the the town is a port (see photo). At the bottom is the town's motto 'Progress'. 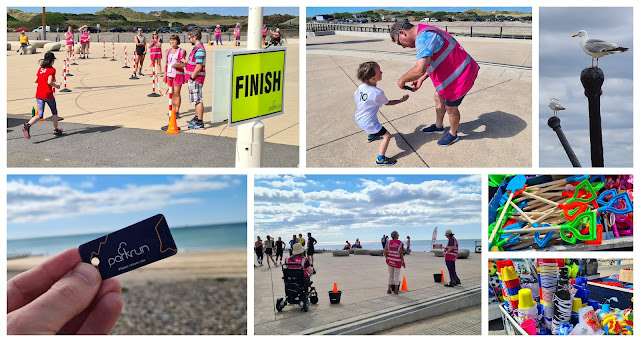 The halfway point is reached just in front of the shops mentioned earlier where there is now a turnaround point marked by a marshal and cone. The out-and-back is negotiated a second time and the finish is found back at the original start line. The open area here is nice and spacious with plenty of room for some post-event recovery before being scanned by one of the barcode scanners. I recorded the route using my Garmin and you can find the GPS data online on Strava. That data was also used to create a Relive course fly-by video and that can be viewed on YouTube. The results for event 97 were processed and online shortly after the last participants had finished. Many thanks to all the volunteers.
The official course page says that the team grab refreshments at a local cafe, but it doesn't say which one. We decided to go into the adjacent The Windmill pub, which is run by Harvester, for breakfast. They had a good selection of offerings for all diets including vegetarian and vegan, and it was very tasty. 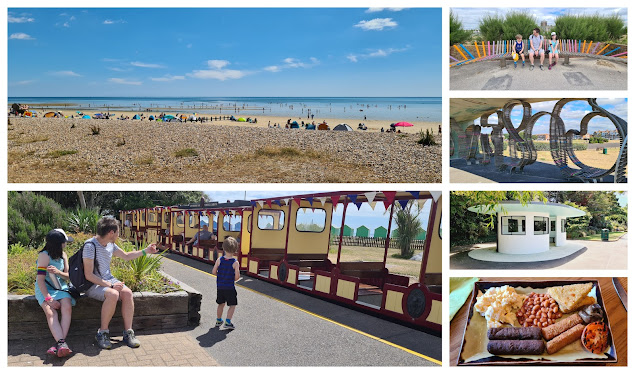 We continued our day with another walk along the prom, stopped at a playground we had spotted during the parkrun, had a ride on the miniature railway and hung out in the beautiful Mewsbrook Park with its boating lake and art-deco features. The weather was perfect for a seaside day out and we finished our day hanging out on the beach and splashing in the sea.
Related Links:
My GPS data from 9 July 2022
The Relive course fly-by video
The East and West Sussex parkrun venues
Posted by copy7t at 17:38