In South East London's Royal Borough of Greenwich you will find the district of Eltham which is home to around 88,000 people. It was apparently called Eald-Ham in Anglo-Saxon times when it was just a village. It's positioning on a high plateau meant that it was strategically significant and this lead to Eltham's most famous feature being built. This is a large country house called Eltham Palace. Between c.1305 and c.1630 it became a home of the monarchs and Henry VIII is known to have spent part of his childhood here. The current building dates from the 1930s but crucially the medieval Great Hall built in the 1470s was central to the design, and has been preserved. It boasts the third largest hammerbeam roof in England. 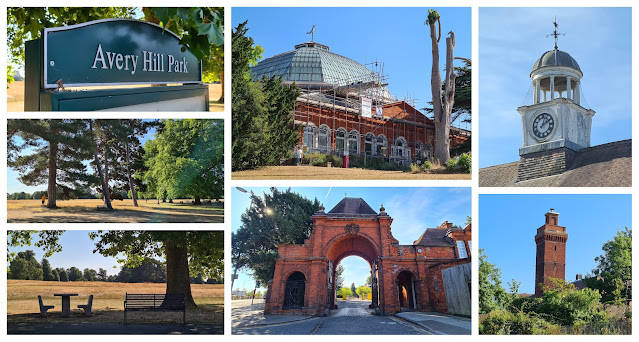 Nearby is another former significant residence, Avery Hill Mansion, which would have been the centrepiece of the Avery Hill Estate. There has been a mansion in some shape or form on this site for over two hundred years, but the current building was constructed in 1890. It was built and owned by an obscenely wealthy man called John North. Much of his wealth came from the Chilean nitrate industry of which he held a significant share. He was a prominant public figure in his day and became known as 'The Nitrate King'. The building has apparently been described by Historic England as an example of 'late Victoria vulgarity' due to it extravagance and quality of materials.
A notable part of the building is the Winter Garden. This is the second largest Victorian glasshouse in the UK. Only the Temperate House at Kew Gardens is larger. The former mansion has had several educational uses since it ceased being a residence. A teaching college was here for many years until it closed in the mid-1980s. The most-recent use had been as one of Greenwich University's campus's but this ended in 2020. The former mansion and extended area is currently being redeveloped into a brand new Harris Academy school for boys and is scheduled to open in 2023. The development also includes the refurbishment of the Winter Garden. Under normal circumstances this would be open to the public, however at time of writing (July 2022) it is closed. If you peep through the eastern conservatory window you should be able to see the 1882 marble statue 'Galatea reclining on a dolphin'. 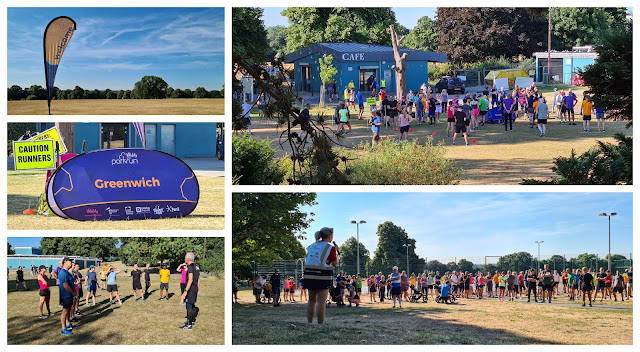 The grounds were purchased by the London County Council in 1902 and opened as a public park called Avery Hill Park. Its ownership/maintenance passed to the Greater London Council in 1965 and then to The London Borough of Greenwich (now the Royal Borough of Greenwich) in the mid-1980s. Avery Hill Park is set in 90 hectares of parkland which is laid out in much the same fashion as it would have been in the past. It is largely comprised of open grass fields and meadows. It is thought that many of the field boundaries date back over 400 years, with some even older than that. Many of the trees here would have been planted by the estate's various owners for landscaping purposes and are well over 100 years old (some have even passed their 200th birthdays). There are tree preservation orders in place in some of the most significant examples.
The modern-day park also features a café, playground, and an enclosed tarmac five-a-side football pitch and basket court. Until recently there was also a BMX facility called Avery Hill Trails which were the longest standing BMX trails in inner London. Sadly the development of the Harris Academy has lead to this being closed down. Since March 2010 the park has been home to a free, weekly, timed 5km event called Greenwich parkrun. It's probably worth highlighting at this stage that this location is not what most people would class as 'Greenwich' (The Cutty Sark is 5 miles away), and I'm guessing this detail has lead to some confusion for visitors over the years. Back in 2010 the parkrun naming convention wasn't quite as refined as it is now. If this event was just starting up now, it would undoubtedly be called either Eltham parkrun or Avery Hill parkrun.

We first visited this venue in May 2013 where I participated with my daughter in the running buggy and then again on Christmas Day in 2016 (without the buggy). So this visit marked my third time taking part here, but was the first time for the rest of the family. Car parking details on a variety of websites seem to be purposefully vague for this park. However there are a couple of parking options - firstly there is an on-site car park which I believe is free-of-charge at weekends (things are currently a bit strange as the main larger section is closed due to the building works). The car park is accessed from Bexley Road via the red-bricked Gatehouse. The second parking option is to use the parking bays on Avery Hill Road which runs along the park's eastern border, these spaces are free-of-charge at all times. The nearby residential streets to the east also seem to be free of restrictions but it would make sense to avoid using these if at all possible.
If travelling by train there are two lines which run close-by. The first option is Eltham Station, which is just to the north-west of the park and is a short walk away (1.4 miles) along the High Street - this is on the line that runs between London and Dartford via Bexleyheath. Alternatively, if you happen to be using the London to Dartford via Sidcup line, you can alight at New Eltham. Station This is to the south of the park and if you take the shortest route is only 1.2 miles away. I use these two lines to travel to and from work, so know them pretty well. There are many bus services that stop outside the park on Bexley Road. If cycling there are bicycle racks right outside the café in the centre of the park. The toilets can be found in the café building, but please note that there is only one shared regular toilet plus one accessible toilet, so it's likely that a queue may form.

Once in the park the meeting point for the parkrun is adjacent to the central hub which contains the cafe (with toilet) and playground. The course consists of three anti-clockwise laps with the surface underfoot being an almost even split of tarmac and grass. Road shoes are fine in summer, but you may find trail shoes work a bit better during the winter or very wet conditions. The profile can be described as gently undulating and what you'll generally find is that when you are moving away from the mansion you'll be heading downhill and the uphill sections are the bits that head back towards the mansion. As I mentioned earlier I have used the running buggy on this course and it was absolutely fine (in fact it is better now because the lower section of the course used to be grass with tree roots, but that section now features a tarmac path).
The start line is on the grass next to the enclosed five-a-side football pitch and after the briefing the participants are sent off on their 5km run. jog or walk around the park. The first section of the lap is on grass and this goes alongside the park's marked football fields. At the point where the course takes its first left turn a quick glance to the right will reveal Henley's Meadow (or Henley's Field), this is the park's wildflower meadow and is named after John De Henley, owner of the fields during the 13th century. In fact there are records that show King Edward II bought hay from De Henley to feed to the deer at Eltham Palace. The Green Chain walking route passes through this end of the park.

At this point on the course there's a short, sharp drop followed by an ongoing, very slight downhill (which feels flat) as the route heads down towards the lower section of the park. Here the course joins the tarmac path and this meanders nicely until it bears around and follows the border with Avery Hill Road up to the top of the park until reaching the Winter Garden glasshouse which is a great sight at the top of the park. The route now rejoins the grass and heads back towards the start area where the loop repeats a second and third time. At the end of the third lap the finish line can be found on the grass inbetween the mansion and the cafe. With the morning's excercise complete, it's a simple case of presenting your barcode and finishing token to one of the barcode scanners who will be positioned nearby. Also keep your eye out for the incredible token sorting board!
The on-site Avery Hill Park Cafe provides the setting for the post-event refreshments. They serve all the usual things you'd expect from a park cafe, so it is the perfect spot to have a chilled-out natter and refreshments with your fellow parkrunners. If you really felt like it you could bring along some chess pieces and have a post-parkrun game of chess on the permanent chess table and chairs set. On this occassion we had to be elsewhere so headed straight off home where I uploaded the day's GPS data to Strava and created a Relive course fly-by video, so please take a look at those if you would like to see visual representations of the course.

The official results for event 589 were processed and published shortly after and 140 people had taken part, which is pretty much spot-on for the current expected turnout. Interestingly, before the great lockdown there were in excess of 300 people attending every week (sometimes even over 400). When parkrun returned the numbers were generally in the 200s, but this then suddenly dropped to the mid-100s. The biggest factor in the current attendance figures seems to be the nearby Sutcliffe parkrun which started in September 2021 and appears to have taken a bit of pressure off this lovely South East London park.
Greenwich parkrun has a very well established team whose volunteers run a slick operation alongside an amazing extended local community. The volunteers on-the-day were all wonderful and I witnessed so much joy and kindness during the event. I do feel that I should give a special mention, and thanks, to the tail walker, Kit, who accompanied my wife and kids throughout the event and somehow encouraged my son to a new 5k PB by almost four-and-a-half minutes!

So, if you haven't visited this venue then you really should swing by and check it out. Just remember to head for Eltham and not the centre of Greenwich!
Related links:
My GPS data from 16 July 2022
The Relive course fly-by video
The London parkrun venues
My Sutcliffe parkrun blog
Posted by copy7t at 21:58