Peterborough is a city in Cambridgeshire with a population of around 215,000 people. The River Nene, which at 100 miles in length is the 10th longest river in the UK, flows through the town. The area has been inhabited for thousands of years with the Bronze Age site of Flag Fen, which dates back 3,500 years, being notable in this respect. The town and the surrounding area also has Roman links with notable places being Longthorpe which was the location of a 1st century Roman Fort and Water Newton which was the location of the Roman garrison town called Durobrivae. The Romans here produced a type of ceramic pottery known as Nene Valley Colour Coated Ware. 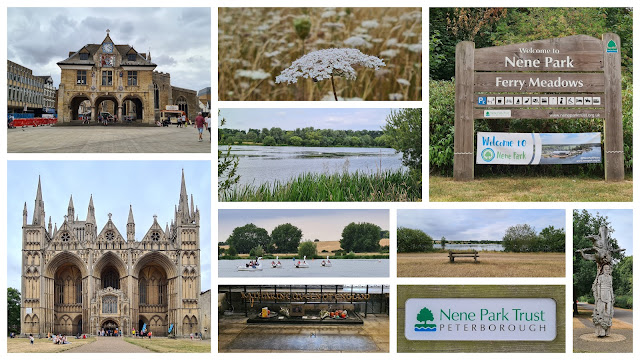 Peterborough itself was known as Medeshamstede during Anglo-Saxon times and this was also the name of the church which was founded here in around 655. This church is thought to have been destroyed during a Viking raid in 864. In 966 a Benedictine Abbey was created from what remained of the destroyed church and was dedicated to St Peter. A defensive structure called a Palisade was constructed and the fortified settlement was known as a burgh, which lead to the town being known as Peter-burgh. During the Dissolution of the Monasteries, the abbey was retained and in 1541 became Peterborough Cathedral (or the Cathedral Church of St Peter, St Paul and St Andrew).
As time moved on the town became known for the manufacture of bricks, and the arrival of the mainline railway in 1850 enabled this industry to expand to the point where Peterborough became the UK's leading producer of bricks. Another big industry in the town was sugar and a factory operated here between 1926 and 1991. British Sugar plc continue to have a presence in the town as their headquarters are located in the Woodston area. Peterborough has one of the fastest growing city economies in the UK. 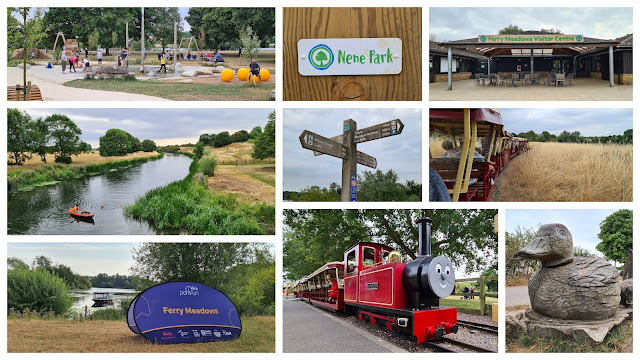 Peterborough was designated a New Town in July 1967 and this kick-started a rapid expansion programme. To facilitate this, tonnes of materials such as concrete and tarmac would be required, so in the early 1970's a number of gravel pits were dug. One of these was located on land to the west of the town centre called Ferry Meadows. However there was a larger plan at work here as the area had already been earmarked as a future park with a large lake at its heart. In fact the plan was for many green spaces along the River Nene to be joined together to create one long network of interconnected parks each with their own distinct purpose and identity, but grouped together under the name Nene Park.
The main hub of the overall park is Ferry Meadows Country Park which was opened to the public on 1 July 1978 by environmentalist, botanist and TV presenter David Bellamy. Ferry Meadows was historically farm land and also the location of a ferry which transported people across the River Nene, and this is where the name comes from. The landscape is incredibly scenic and, as you'd expect, dominated by the water features, of which there are three. The largest of these is Gunwade Lake and this is home to an activity centre called Nene Outdoors. Activities on offer range from family friendly swan pedalos and row boats through to more adventurous pursuits such as paddle boarding, kayaking, dinghies and windsurfing. They also run non water-based activities like archery, climbing and bicycle hire. Ferry Meadows Country Park covers 658 acres and contains a visitor centre, cafe, three children's playgrounds, nature walks, various carved wooden features, an eco-electric passenger boat and the Ferry Meadows Miniature Railway. The park also contains the foundation of a Roman barn which was discovered during the gravel extraction in the 1970's. The planned layout of one of the lakes was altered in order to preserve this historic find. Within the park's boundary you'll also find a camping ground and golf course. On 3 August 2013 the park became home to its very own free, weekly, timed 5km event. It was originally known as Peterborough parkrun, however from 21 December 2019 the event's name was changed to Ferry Meadows parkrun.
We visited the park in July 2022 and took part in event number 402. We had stayed overnight in the Ferry Meadows Premier Inn, so had a leisurely 1 kilometre walk to the start line. If travelling by road, the park is signposted with the brown tourist attraction signs marked 'Nene Park Ferry Meadows'. The Ferry Meadows car park opens at 6.30am all year round, it has a 2.1 metre height limit and there is a fee for all vehicles. The standard parking fees vary depending on how long you stay with the maximum fee currently being £6 for all stays over 4 hours. However parkrunners visiting on Saturday mornings can simply scan their parkrun barcode at the payment machine and pay a flat fee of £1 which covers up to 11am. It looks like Peterborough has a pretty good network of cycle lanes, and there are bicycle racks outside the visitor centre. 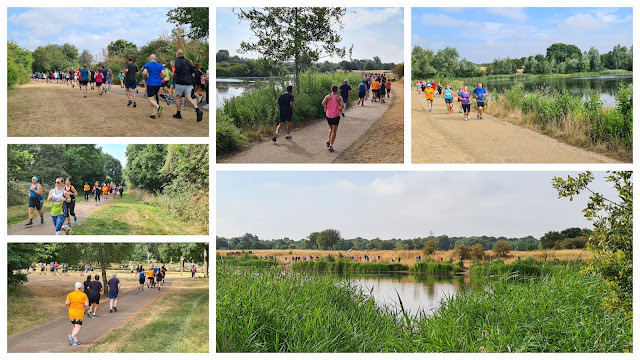 Travel by train would mean initially alighting at the main Peterborough Station in the centre of town and then making the onward journey either on foot, but at 3.4 miles away this may not work for everyone. The route 1 bus may be a better option for onward travel from the train station. Incidentally the Nene Valley Railway runs from the centre of Peterborough and along the southern border of Ferry Meadows, initially I thought this may be an additional travel option, but all the timetables I have viewed suggest that the trains do not run early enough to arrive in time for parkrun - definitely worth checking out for a post-parkrun activity.
Once in the park, the point to head for is the main central hub which contains the visitor centre and cafe at the southern tip of the second largest of the lakes, Overton Lake. The toilets can be found adjacent to the cafe and car park and were already open when we arrived at 8.20am. As the clock reaches 9am there's a first-timer briefing opposite the cafe followed by the main briefing at the start line which is just a bit further along the path. The course is best described as a single lap consisting of two different out-and-back sections and it is flat. Participants are asked to keep to the left at all times. The surface underfoot is 100% tarmac so road shoes are the shoe of choice here all year around. Buggy runners will be just fine on this course, but it is a very well attended event so watch out for congestion during the first kilometre or so. 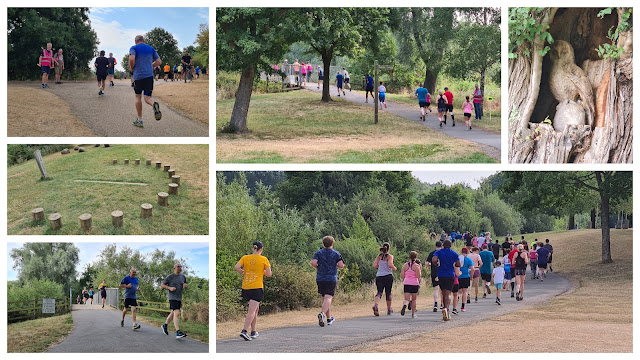 The course first heads out to the north for a small anti-clockwise loop around Lynch Lake, which is the smallest of the park's lakes. This one is mostly used for children's activities such as pond dipping. The sheer number of people here will inevitably result in people spreading out onto the adjacent grass, which we were told during the briefing is fine. Once the loop is complete the route heads back past the start line and the course continues on its longer out-and-back in the opposite direction.
Following the lakeside path along the edge of the Overton Lake the course passes the human sundial, the Badger Play playground and shortly after, a tree which features a carving of an owl. This section of course has quite a natural feel with woodland on either side. There's then a crossing of part the River Nene via Ham Bridge which leads into the North-eastern part of the park. 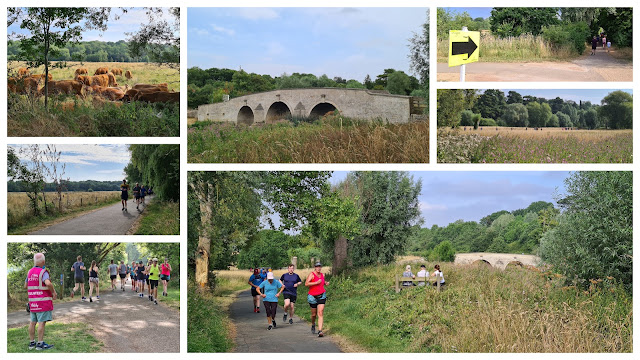 This part of the park feels more like being in the countryside. The areas to the right are meadows which were restored between 2017 and 2019 to wetland areas. They feature a network of cross ditches which help regulate the amount of water that is held throughout the year and this in turn provides a great habitat for various wetland birds. There are also cattle grazing in these fields, so if you keep an eye out you may spot the resident cows. Once past a small junction the course continues, but the lake to the left hand side is now Gunwade Lake.
Another loop exists at this end of the course, and this one is negotiated in a clockwise direction. During the loop the course passes the historic Milton Ferry Bridge which dates from 1716, so is just over 300 years old. It was built by the former owners of the land to replace the ferry service across the River Nene. The route the parkrun uses means that in order to get the best view of the bridge, participants would need to look backwards, so the majority may miss it. (It's worth wandering back over to check it out post-parkrun where you'll also find very scenic view from the bridge looking down the river). 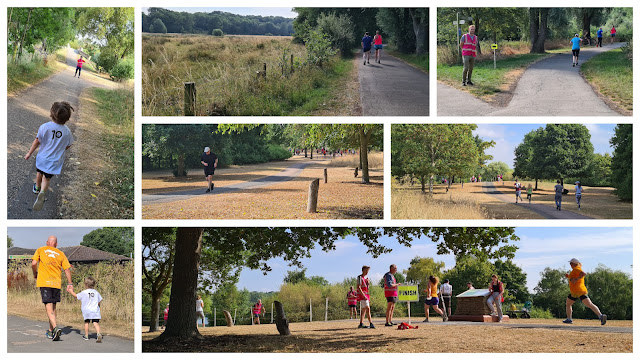 With the loop complete, the course works its way back along the already trodden paths, back over the bridge and alongside the lake towards the original start point. The very last section of the course branches off to the right were the finish line is found. The finish also happens to be right next to the remains of the Roman Barn, so it's worth taking a quick peek before moving on. The barcode scanners can be found just after the finish line and once that is taken care of, the post-event refreshments venue is the Ferry Meadows Cafe where you can get a 10% discount by showing your parkrun barcode.
I recorded the parkrun course with my Garmin and the GPS data can be viewed on my Strava account. That data was also converted into a Relive course fly-by video and you can watch that on via my YouTube account. The results for event 420 were online a short while after and 427 people took part. The current attendance figures seem to be fairly consistent between the mid to high 400's, the slightly lower turnout when we visited was most likely due to it being the start of the summer holidays. The team here clearly have the whole thing down to a tee, and the event seemed to run like clockwork. The first-timers briefing was particularly good with all areas thoroughly covered along with a decent sprinkling of humour. 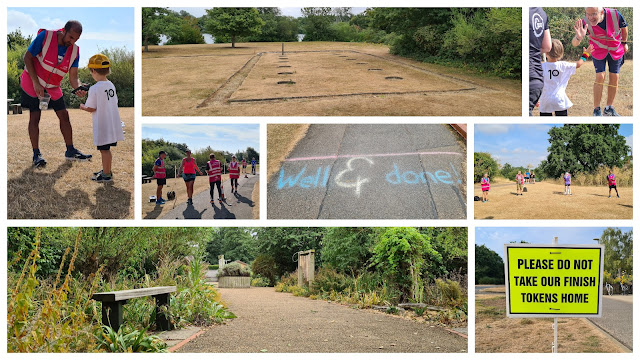 We had spent the previous afternoon in the park so had already explored it quite extensively, including all three playgrounds and the human sundial. We also had a ride on the miniature railway. So our parkrunday continued away from the park where we visited Flag Fen Archaeology Park, the Railworld Wildlife Haven and had a look around the centre of Peterborough. We went into the cathedral and we were able to see the burial spot of Katherine of Aragon, Henry VIII's first wife and Queen of England between 1509 and 1533 plus the original burial spot of Mary, Queen of Scots (her body was later moved to Westminster Abbey). It was quite a full-on and exhausting 24 hours in Peterborough, but very, very enjoyable!
Related links:
My GPS data from event 402 (23 July 2022)
The Relive course fly-by video
The Cambridgeshire parkrun venues
Posted by copy7t at 14:56