Malling forms the northern half of the Tonbridge and Malling Borough, in Kent. However there is no such town or settlement called Malling, which makes the naming of Malling parkrun quite intriguing. As I understand it, Tonbridge and Malling Borough Council were keen to have both elements of the borough's name represented within the names of its two parkruns, and even though it doesn't fit in with parkrun's naming convention policy, the council got their way.
This can of course prove a tad confusing for parkrunners trying to work out where they are heading. There are towns to the south of this venue called West Malling and East Malling, but not one called Malling. West Malling was historically known as Town Malling, but that is as close as you get. In any case, the venue for this event is actually closer to New Hythe, Snodland, Larkfield and Leybourne than it is to either of the Mallings. The venue for the parkrun is Leybourne Lakes Country Park. The logical name for this parkrun would have been Leybourne Lakes parkrun, but we are where we are. Before the area became a country park, it used to be the site of sand and gravel pits which were extracted between 1946 and 1977. The country park covers an area of 230 acres and was opened in 2004. There are eight named ponds and lakes within the site as well as landscaped areas.
The country park is most well-known for its watersports and it has its very own Watersports Centre which specialises in activities such as open water swimming, windsurfing, canoeing, kayaking and scuba diving. It is also used for triathlons and there are various fishing clubs based here. The lakes are also home to many species of wildlife including the resident swans. 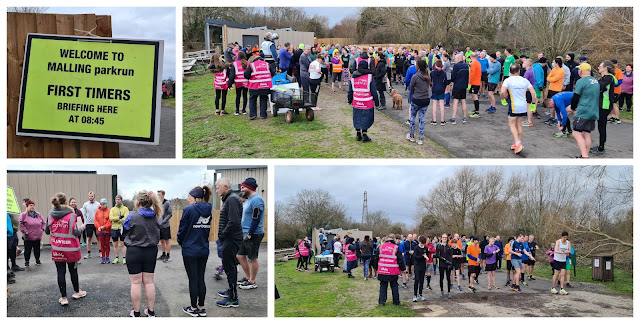 We first visited the country park and took part in Malling parkrun event 6 back in November 2015. We revisited in January 2023 and took part in event 288. Travel to the venue is easiest by car, but if using a sat-nav be mindful that they can sometimes direct visitors to the wrong part of the area - there doesn't seem to be a postcode for the park itself. We used Google maps and found that entering 'Leybourne Lakes Country Park' rather than a postcode navigated us right into the country park.
There is an on-site car park and the fee, as of 2023 payment can be made using the on-site payment machine or by using the RingGo app. On our most-recent visit we used RingGo. There is a charge of £1.80 for up to four hours of parking, and this should cover most parkrunners' needs. If longer is needed, the other option is to pay for the full day, which is £4. Please note there is a 'convenience charge' of 10p for using the app. Should the car park be full, additional parking can be found at the nearby Tesco.
If cycling there are cycle racks within the main car park area. If taking the train, New Hythe or Snodland appear to be the closest stations and either option leaves approximately 2km of walking to reach the parkrun meeting area. Please note that the toilets adjacent to the car park were permanently closed as of 31 October 2022. However there is a new cafe which has been constructed next to the parkrun meeting area and this contains a toilet - we found this to be open from around 8.30am. 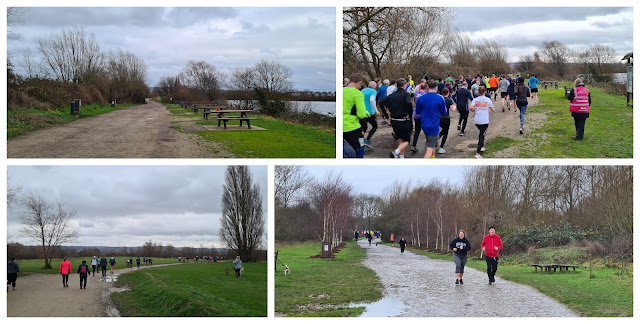 The meeting point for the parkrun is on the north bank of Ocean Lake and this can be found by following the footpath out of the car park. Look out for the 'To The Lakes' sign, you cross over a small footbridge before reaching the right place. The event takes place at 9am every Saturday. As is standard with parkrun, there is a first-timers briefing and this is followed by a full briefing for everybody. The course is made up of two identical clockwise laps which start and finish on the north bank of Ocean Lake, just past the cafe.
It's a flat course and underfoot is mostly a stony trail-like surface. The jagged stones that protrude during the first half of the lap create quite a bumpy surface, so bear that in mind. The latter part of the lap has a smoother path. For shoe choice, it feels like it would be ok for road shoes if that is your preference, but some people may prefer the extra protection given by trail shoes while negotiating those protruding stones. I used the running buggy here in 2015 and although a little bumpy for my daughter, overall it was fine. 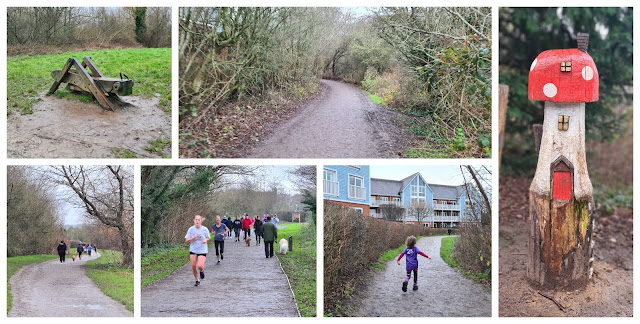 The start area is wide enough to accommodate a decent number of people, but this venue has become very popular so expect it to be a little congested at first. The course is very simple to follow as it simply follows the path which goes around Ocean Lake - whenever there is a split in the path always follow the right hand option. Given that it is such an easy to follow route, don't expect to see many marshals or signs out there on the course. There are enough twists and turns to keep things interesting and you may even spot some of the park's wooden animal features adjacent to the path.
At the end of the two laps, there is a finish funnel and in the usual parkrun way, it's a simple case of having your personal barcode and finishing token scanned before heading off. If you fancy hanging around, there is now a cafe (this wasn't here during our first visit). We grabbed a quick drink and some lovely pieces of cake before heading back to the car. The results were processed very swiftly and they show that 260 people participated in event 288. 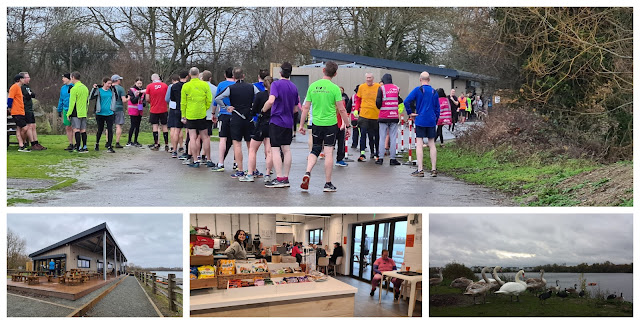 I recorded the GPS data of the course using my Garmin and you can view that on Strava, there is also now a Relive course fly-by video on YouTube so feel free to take a look at that too (links below). The course is identical to the one we used on our first visit. The volunteers were, of course, amazing, so a huge thank you to everyone involved.
Related Links:
My GPS data on Strava (January 2023)
The Relive course fly-by video (January 2023)
GPS data from car park to the start (with added milling around)(January 2023)
My original GPS data (November 2015)
My original Malling parkrun blog (November 2015)
The Kent parkruns (blog7t page)
Posted by copy7t at 17:03