Leavesden is a residential area in the north of Watford, Hertfordshire, and is home to around 6,000 people. It was a hamlet for much of its early history and remained largely agricultural right up until the 1930s when a number of housing developments were built. Just after the outbreak of the Second World War, Leavesden Aerodrome was built. Its main purpose was a base for the manufacture of the Handley Page Halifax heavy bomber and the de Havilland Mosquito fighter-bomber aircraft. Both of which contributed greatly to the war effort. Post-war, the site specialised in aircraft engine development largely by de Havilland and then Rolls-Royce, who eventually moved their operations elsewhere by the early-nineteen-nineties, and the site then closed completely.
The old airfield was not vacant for long, as Eon Productions leased the site, and the dis-used aircraft hangers were transformed into filming studios for the James Bond movie, GoldenEye. With the filming complete, the site was officially named Leavesden Studios and it quickly became popular within the film industry. Eventually the studios were taken over by Heyday Films, in order to start production on the Harry Potter series of films, and this arrangement stayed in place until Warner Bros. formally purchased the site in 2010. 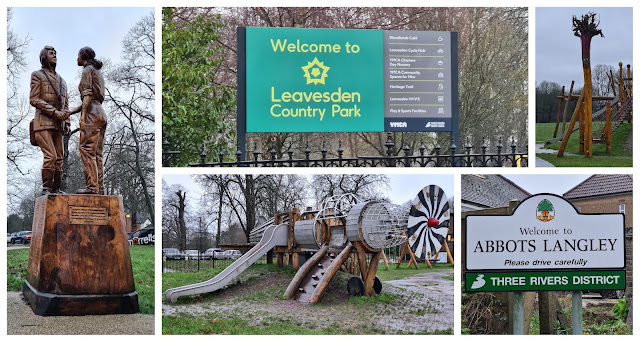 Over the years many successful films have been shot or partially shot at Leavesden including Star Wars: The Phantom Menace, Batman: The Dark Knight, Inception, the Paddington movies, and Spiderman: Far From Home. Since 2012, most people that visit the area are probably visiting the Harry Potter studios, or to use its full name, The Warner Bros. Studio Tour London - The Making of Harry Potter. The attraction is home to a large number of the sets used in the Harry Potter series of movies, which were also filmed here. The visitor attraction can accommodate up to 6,000 visitors per day, and it is of course very popular with fans of the books and films.
Moving back in time to the 19th century. In 1868 the Metropolitan Poor Act was passed and this lead to the formation of the Metropolitan Asylums Board (MAB). Its job was to assist London's sick and poor, and it did this through setting up institutions, workhouses, hospitals and asylums for 'quiet and harmless imbeciles'. One of these was established in Leavesden and it was originally known as 'The Leavesden Imbeciles Asylum', or possibly 'Leavesden Asylum for Idiots and Imbeciles'. It went on to become known as Leavesden Mental Hospital in 1920, and then, from 1937 as Leavesden Hospital.
The asylum contained space for thousands of patients, along with further space for over 600 orphans. It had its own school, gas works and sewage treatment system, and also a 42-acre farm complete with livestock. One of the asylum's inmates was suspected of being the infamous Jack the Ripper, however as the Ripper's identity has never been proven, it is not known if it was indeed him. The hospital is credited for its pioneering role in understanding, recognising and treating mental health conditions. Leavesden Hospital eventually closed down in 1997. The original hospital admin block survived and has been transformed into private housing. Some new housing and retail outlets have been built. The rest of the original grounds have now been transformed into Leavesden Country Park.

The country park covers an area of 27 hectares and very much focuses on the heritage and history of Leavesden, notably the hospital, the aerodrome and the film studios. You'll find beautifully restored Edwardian features and a remembrance garden. There are sculptures on display, all of which you will see if you follow the heritage trail. I will note here that the park itself is split into several separate sections which are intersected by a number of roads. Most of the heritage is found within the central parts of the site which sits to either side of College Road. Also, almost the entire park sits within the civil parish of Abbots Langley, not Watford.
The reason we had visited was, of course, to take part in Leavesden Country parkrun which has been a weekly fixture in the park since October 2022. The parkrun takes place in the most northerly section of the country park, which contains areas for sports, the park's main playground, a YMCA Community Hub, and some woodland. The YMCA building contains toilets, but please note that they do not officially open in time for parkrun. The parkrun page says they open at 9am, while the park's official website says 9.30am. Either way, if a toilet is essential you'd be well-advised to make a pit-stop during the journey. We stopped at the Watford North branch of McDonalds which around 2 kilometres (1.2 miles) to the south of the park. For the record, the park's toilet was open before 9am on the day we visited.

The official arrangement for car parking is detailed on the event's course page and you should really take care to read and understand this before visiting. Essentially the park has free car parking facilities for all park users, however the main car park itself is not huge. There are other users of it on Saturday mornings, so the arrival of parkrun (and a load of extra vehicles) seems to have placed it under quite a bit of strain. The official parkrun page directs parkrunners to initially use the part of the car park closest to the main vehicle entrance. Once this section is full, parkrunners are then free to use the main car parking facilities within the central point of the park.
If you are local enough to be able to cycle or walk, this would definitely be the way to go. There are bicycle racks outside the YMCA building. Equally if you are travelling from further away and can make public transport work, that would seem to be a sensible idea. The course page says the number 20 bus stops near the park. If you are arriving in the area by train I would expect you'd alight at either Kings Langley (1.8 miles) or Garston (1.7 miles), but as you can see, they are both a fair distance away. However the walk from Garston to the park does go straight past the aforementioned McDonalds.

The meeting point for the parkrun is just outside the YMCA hub and playground where the briefings are held. The starting point is outside the multi-use caged sports courts. The course itself is almost a 50/50 split between grass and hard paths. When it's nice and dry underfoot you can confidently use road shoes, but once the wetter weather sets in this is definitely a course for trail shoes. The course is not totally flat, but neither is it hilly, My Garmin GPS data picked up 25 metres of elevation change (59 when imported into Strava). I think I'd categorise it as gently undulating. Buggy running is fine here, although if you don't like pushing the buggy through squelchy mud it's probably best to go in the summer.
The route features a start tail, then three clockwise laps, all rounded off with a slightly shorter finish tail. The lap is split into two loops with a short two-way section joining them together (like an hourglass). The first loop takes place on the hard standing paths which meander very pleasantly through the park's woodland area. If visiting in December/January look out for the annual Fairy Trail where you'll find fairy doors and other hidden items nestled within the trees. At the end of this section, there's the short two-way section. Just keep left here to avoid collisions and take care to avoid barging past other people.

The course then enters the grass section at the north-east corner of the park. The first half goes around the Heritage Orchard where if you look carefully there is a wooden sculpture of an apple (half-eaten). The grass section continues into the area which contains the park's full-size football pitch. Following the perimeter of the field takes the participants to the two-way part and back into the woodland walk section. Once three full laps are complete, the course leaves the loop and heads back over towards the playground where the finish line can be found. Barcode scanning takes place right next to the finish.
There were ample marshals out on the course and plenty of signs and cones placed in all the right places, so navigating around the course should be nice and simple.
Once all of the morning's participants have completed the 5km, the team retreat to the YMCA Woodlands Cafe YMCA for the weekly post-parkrun refreshments and social. It had been pouring with rain all morning, so we were looking forward to some warm drinks and had fully intended to join them in the cafe. However, my four-year-old son fell face-first into a large puddle about 300 metres before the finish line and he was soaked from head-to-toe. We hadn't brought a full change of clothes for him, so we had to abandon the plan and head home a little earlier than originally planned.

I did manage to have a quick look at the heritage trail before leaving, while I didn't find all of the sculptures, I did spot most of them. I also found the Covid-19 Snake, which started out simply with children placing painted stones down during the lockdown period in 2020. The Three Rivers District Council set these stones in concrete as a permanent feature. Another feature to look out for is Arbi the Tree, found in the playground. I believe this name was given by the With Me Now podcast, so it was fun to see it! If you want to hear the With Me Now podcast profile of the venue, check out episode 228 (also on Spotify, Apple and Ko-Fi).
The results for event 12 were published shortly after the finish and 95 people had taken part. This number seems to be about spot-on the expected amount now that the initial rush of tourists has eased off. The venue sits outside of London, but within the M25, so is included in the London+ set of venues. The GPS course data and the Relive course fly-by video can both be found via the links below. Lastly, the volunteers really were great when we visited, so I'd like to add a huge thank you to them all for making us feel welcome and for standing out in the miserable weather while we slid and splashed around the course!
Links:
My GPS data from event 12 (14 January 2023)
The Relive course fly-by video (14 January 2023)
The Hertfordshire parkrun venues (blog7t page)
The London parkrun venues (blog7t page)
With Me Now Episode 228
Posted by copy7t at 12:54