Today I woke up at 6am, put on my running kit and my new trail shoes, and went for my first trail run. 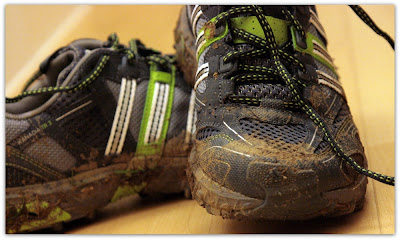 I picked up the trail at the end of Tonbridge Racecourse Park.

I'd gone maybe 10 metres along the trail before a rabbit crossed my path. We often see rabbits from the train around here but I'd never managed to be this close to one without it running away. To be fair, I did start the run at 6.30am, so the rabbits are probably used to having the place to themselves at this time on a Sunday!

Anyway, on with the trail. The first part of the trail was fairly dry and compact earth with just a few puddles. The trail follows the path of the river Medway, heading West out of Tonbridge.

At the next section there was a choice between a couple of hundred metres of tarmac or a bike trail... I took the bike trail.

I went past the ominously named 'Lucifer Bridge'. Here the trail got a little wetter and muddier, nice!

So I carried on, passing along the edge of a couple of fields on muddy, grass trails, until I reached the next real trail section. It was at this point that I heard a woodpecker tapping away on one of the trees, I looked around but I couldn't see the little fella.

Here the trail was about 80% waterlogged, and the remaining areas were reduced to thick mud... Trail Heaven! I almost had to walk most of this section as I quickly realised that the mud was on the lookout for a nice new pair of trail shoes to swallow! Note to self: Tie the laces tighter next time and/or wear thicker socks.

I made it through and entered another field, then crossed a bridge (no name on this one) to head back along the opposite bank of the river Medway. This side was much less muddy and after a couple of wrong turns in the forest I came out in Haysden Country Park to be greeted by the most awesome sunrise reflecting off the water of Haysden Lake. I ran along next to the water until deciding to jump into the forest to my left, over a few tree stumps and branches, and then back onto path.

I ran past some sleeping fishermen with a Tarahumara-like lightness so as not to wake them. Then as I reached the end of the lake, I once again jumped into the forest and followed a path. It brought me back out next to 'Lucifer Bridge' - This time I had to cross it.

I'm happy to say that nothing untoward happened on the crossing!

From here I headed back along the first sections of trail and as I was just about to leave the trail I came across three more rabbits. They didn't seem to be bothered by my presence, but I slowed down to almost a walk so as not to startle them.

I had arrived back at Tonbridge Racecourse Park having completed my first trail run and feeling on top of the world. 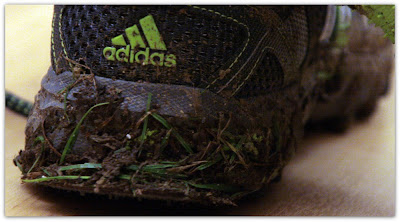 Running on the trail made running feel like it did when I was a child - It was fun and exciting. The puddles and mud were not there to be avoided, there was no need to worry about getting my road shoes muddy - As far as I'm concerned, trail shoes are supposed to be covered in mud, and although mine are yet to be completely covered, they have made a start!