As you may have spotted from previous posts, I have recently developed Iliotibial Band Syndrome in my right leg. In the past it has always been my left leg that has suffered. Somehow I have managed to get over the pain in the left leg but I'm not completely sure what I did that helped.

I am feeling very frustrated as the weather has been great and all I want to do is get out and run. However I am being sensible and forcing myself to take a break from running. 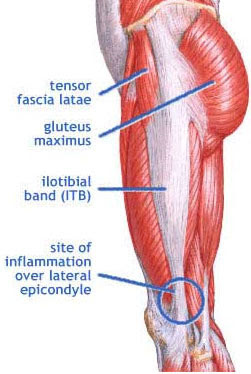 From what I have read the pain comes from the fact that the IT band is 'pulled too tightly causing it to rub over the femoral condyle (bone) and\or the bursa.' - Taken from this helpful post, it also contains links to exercises.

The following 'could' be reasons for the pain. I have highlighted which ones I think are most likely. But this is just what I think is most likely, in reality I really don't know what has caused it.

As I type this post it has been 4 days since my last run, I plan to start the strengthening exercises from Thursday (just body weight) and to attempt a 3km run on Saturday, that'll be a full week without running. Of course, when my foam roller arrives I'll start rolling too.