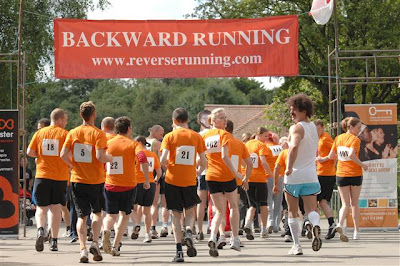 I've been researching different ways to strengthen my legs and I stumbled across 'backwards running'. Sounds like an interesting variation to try but I'll need to pick my location wisely. The safest options seem to be:

This is probably the safest option in terms of running into somebody or something. However the downsides are - I'll probably be told that running backwards contravenes the health and safety policy of the gym (as does being barefoot - this one is confirmed). Secondly I'll probably become known as 'that guy'... What guy? 'that guy who runs backwards on the treadmill' - Although this is better than being known as 'that guy who fell off the treadmill' - that's not me yet!

Still fairly safe when the park is quiet. Probably have to deal with some odd looks and I'll still become 'that guy'! But I don't mind really, it might be nice to be 'that guy' for once.


...... and then I stumble across something really interesting!

Excuse my ignorance, but I never knew there were backwards running races. Now as long as this isn't a belated April fools joke I am interested in taking part in the 3km race in July.


Has anyone taken part in a backwards running race? Has anyone tried running backwards before, and do you have any tips? Has anyone come across any other weird races/events?