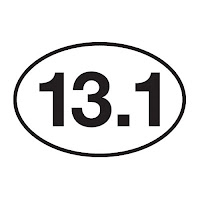 I have based it on the novice half-marathon plan from Bob Glover and Shelly-Lynn Florence Glover's 'the competitive runner's handbook' but allowed for a more gradual climb with the long runs with just 1km added per week.

The basic formula is that I run 5 times per week with Wednesday being my speed training day and Sunday being my long run day. There will be some races included within the training - One or two 10k's and a few Parkrun 5k's. The exact details are not set in stone, I fully intend to make alterations whenever I feel it is necessary.

The two non-running days (usually Mon and Fri) are to be used as either complete rest or cross-training/weights days, depending on how I feel.

I have increased my mileage up to around 38-40+km per week and have been at this level for the past 7 weeks. The plan gets me up to a peak mileage of about 50km during August, before tapering down during September in time for the half-marathon, on 25 September!

I know the next twelve weeks are going to fly by, and before I know it I'll be standing on the start line waiting for the signal, I wonder who will perform that task - Dame Kelly Holmes, maybe?