We managed to drag our three sleepy heads out of bed this morning to drive up to Croydon for the second Riddlesdown parkrun. We didn't get out of the house until after 8am so I was worried that we might end up arriving with not much time to spare.

We jumped in the car, strapped the baby in and took off. It was just as we were turning out of our street that I noticed the petrol was on the red line.... more delays!! So we had to make a quick pitstop en route.

At 8.45 we arrived at Riddlesdown, by this time the baby had fallen asleep so we had to 'accidentally on purpose' wake her. By the time we were out of the car and ready to head across to the start line it was 8.51. Only 9 minutes left!

We had crossed the road and almost made it to the entrance when I realised that I had left my parkrun barcode in the car! I ran back and grabbed it, then had to run to catch up with the ladies, who had continued walking. It worked out quite well really because it gave me a few extra minutes of warming up!

First Lap, still feeling ok at this point.
Once at the start line I decided that I felt good to race (my hamstring had felt tight on Thursday), so I headed towards the front. I recognised a few faces and knew they were going to be a few minutes quicker than me so I made sure that I lined up behind them.

Just after half-way and the pain had started to set in.
I spent the whole race with one other runner (I think some people were shouting 'go Gerry!!' as we ran past so I assume that was his name). During the first lap he was right behind me, it was the first time I have had someone right behind me like this - I must say that I didn't enjoy the experience, I definitely prefer being the one being pulled along!

At the half-way point the one of the time keepers shouted out our 2.5km time '10 minutes' - That was 26 seconds faster than the previous week. I thought to myself 'if I can just hold this pace I might just manage to go sub-20'. 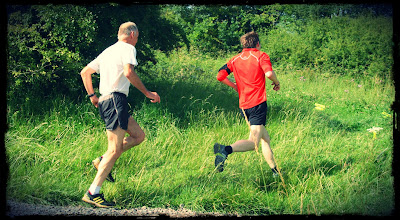 moving from the gravel path back into the long grass
As we continued into the second lap my running companion had a bit more in him than I had and he passed me. Once he had gone past all I could think of was trying to hold the same pace, but it was getting really hard to do so, I tried to stick with him and did manage to keep fairly close for the rest of the race, but by the last km I was absolutely knackered and I felt like I started to slow. He edged away from me as we reached the last 500 metres or so and I crossed the line a couple of seconds behind him.

Stats:
I was disappointed with my time because I felt like I had run faster than last week, but I'm learning more about how to race and I think my split times will show that I should have started slightly slower than I did in order to save more energy for the second half (or something like that).

I can take some comfort in the fact that I finished first in my age group!! 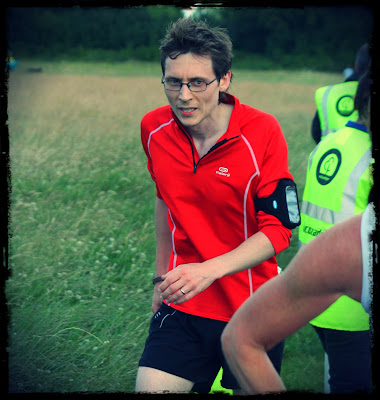 a couple of seconds after crossing the finish line
I have to decide what to do next Saturday....

Thanks to the wife for taking the photos that brighten up the blog!