Please note: There is some updated information from my 2022 visit at the bottom of this page.
When I first started parkrunning, I always hoped that one day someone would start one in Southwark Park. As of 7 September 2013 Southwark parkrun now exists and I am over the moon about it.

The reason behind my unusually enthusiastic enthusiasm is that I grew up just a stone's throw away from the park and spent many a happy hour there, whether it was as a very young child in the one o'clock club or as a slightly older one in the playground, then as a teenager playing football or using the running track. Each stage of my early life has links this park in one way or another. 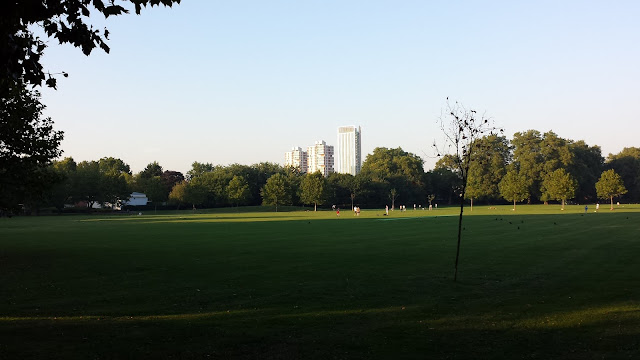 I have competed here in the Metropolitan Police, and various other, five-a-side football competitions and in primary school we did a sponsored walk (which I ran) and was 10 laps of a fair chunk of what is now one parkrun lap. One of my friends even lived in the house in the park next to the Hawkstone Road car park entrance and we spent many an hour there playing on his Commodore Amiga 500 during the 1990s. 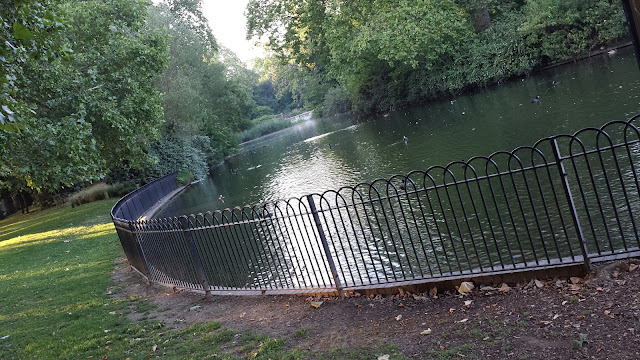 The park is divided in two by an access road, which is a shame because it means that the parkrun cannot show off all the features of the park (for more info read the parkrun policy on course safety here). The run takes place in the southern half, in my day there used to be an outdoor swimming pool where the art gallery and playground are. The playground is brand new and replaces the previous one which was in the northern half and is now a wildlife garden. Also in the southern half is the boating lake / duck pond, which, along with many other parts of the park was restored to its former glory during 2001. The lake now has a dolphin sculpture in it (called Family of Dolphins), this was originally in Surrey Quays shopping centre 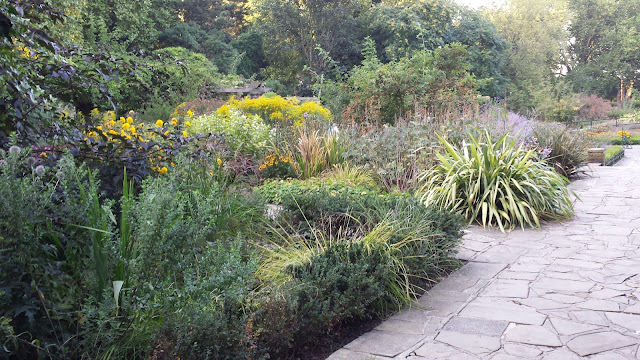 The features in the northern half that you won't see during the run are the wildlife garden, bowling green, tennis courts, and the bandstand. If you do venture into this half you'll see the open area around the bandstand, I once watched some banger racing here in the early nineteen-eighties with only a standard barrier in-between us and the action - these days health and safety would never allow such an event to take place in such close range to the spectators! 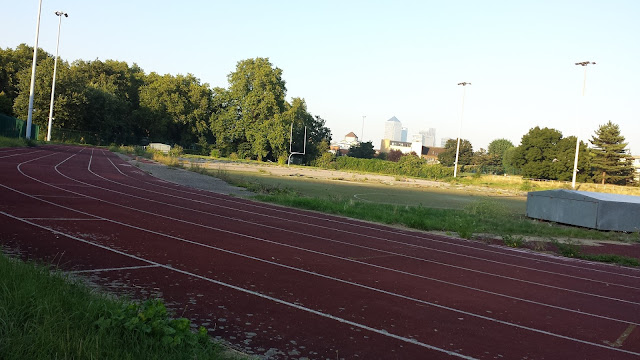 There is a small car park just off of Hawkstone Road, it doesn't have any bicycle racks but there are plenty of fences you could use. Surrey Quays shopping centre has a huge car park and it's probably closer to the start/finish than the car park in the park. If you are cycling and are planning to stay for a tea or coffee afterwards you could use the set of bike racks at the cafe and have your bike close by for when you leave, or there are a couple at the art gallery next to the playground, failing that there are fences and various posts near the start/finish area so you could use one of those. The toilets are in the cafe, but it probably won't be open before the run - Alternatives you could try are Seven Islands Leisure Centre, Surrey Quays shopping centre or the Surrey Docks Tavern - which opens early to serve breakfast. 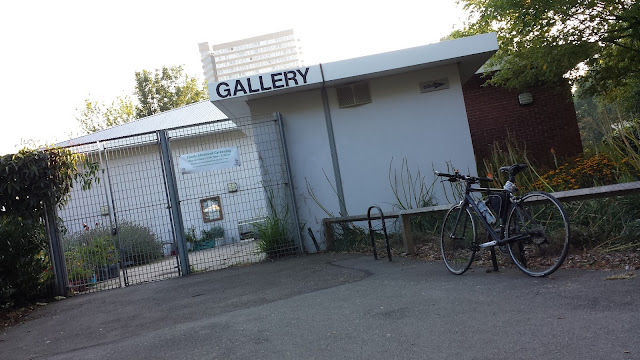 Public transport users will find links pretty good these days. The closest station to the start line is Surrey Quays overground. If you were to take the Jubilee line you could alight at Canada Water and enter the park via Gomm Road (adjacent to Seven Islands Leisure Centre) or if you arrive too early and fancy killing some time you could use Bermondsey station and have a meandering stroll through the northern half on your way to the start/finish area. If you were on a main line train you could get off at South Bermondsey but if you were passing through London Bridge station it would be just as easy to change to the Jubilee line. 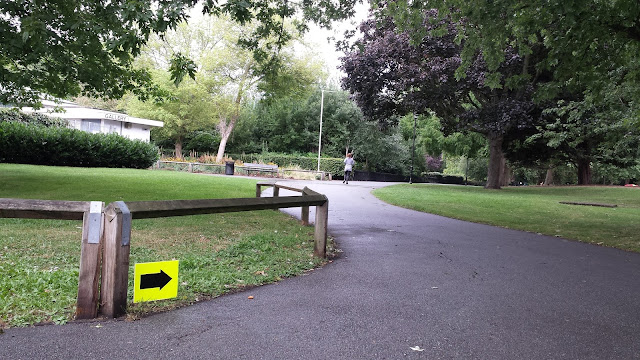 Finally we can talk about the parkrun! I was fortunate enough to be around to take part in the trial run a few days before the inaugural event and it has become my first full freedom parkrun to be logged (I have only previously logged the 2km Bushy Junior parkrun course as a freedom run).

I have to get this out there, and I can't be the first to notice it - The course looks like a slightly overweight twitter bird. Check out the course page to see what I mean! 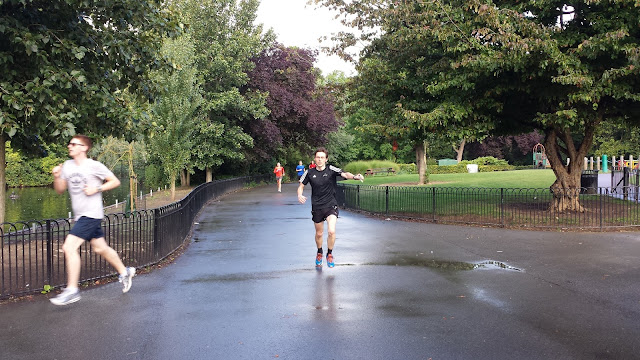 The 5k takes place over three 1.6ish km (1 mile-ish) laps and are run in an anti-clockwise direction. It starts on the tarmac path nearest the China Gate entrance (that's the one nearest to Surrey Quays station) and follows the path towards the children's playground. When you reach the playground you follow the line of its perimeter fence, turning left towards the duck pond and then left again. 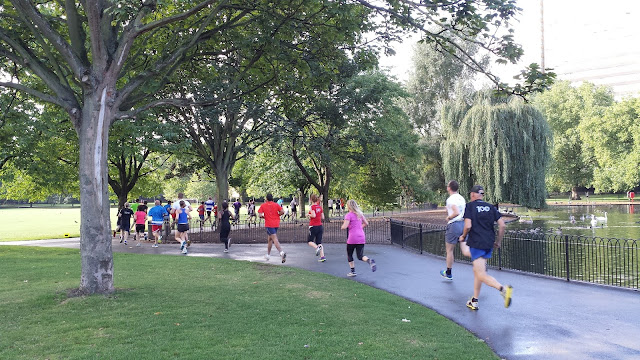 With the duck pond on your right you'll follow the path round its perimeter until you pass the boating lake pavilion and as the path splits you stay on the right and meander past the Ada Salter rose garden - named after the wife of a former MP for West Bermondsey, Alfred Salter. 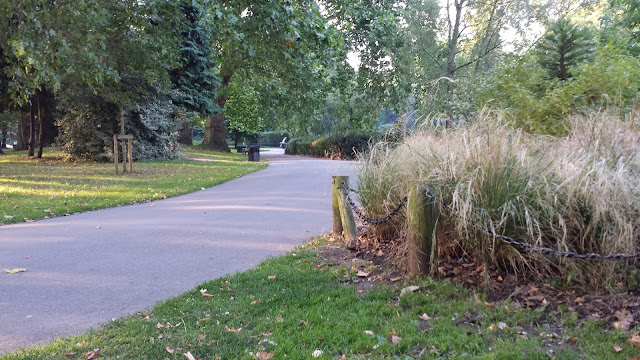 Once you reach the end of this path you turn left and head straight under the avenue of trees and back past the boating pavilion - you can wave to the rest of the runners as it's two-way parkrun traffic here. Next up is the Dilston Gallery, which you'll pass on your right hand side and shortly after you'll pass the one o'clock club (now part of a school). 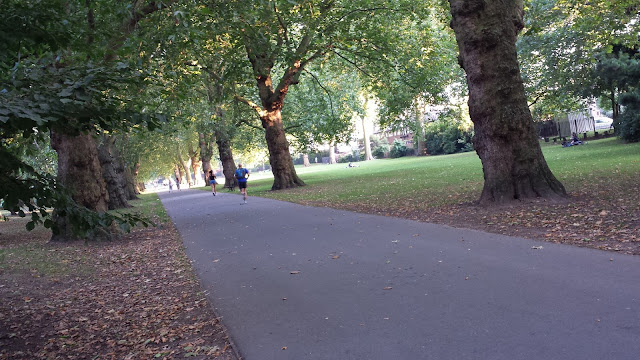 There's a left hand turn as you reach the car park, which is immediately followed by the Southwark Park Sports Centre. Just after the entrance to the sports centre, the path swoops downwards and then back up again before running parallel to the athletics track - sadly the track is in a poor state of repair (see photo above) at present. At the end of this path the course bears right and then does a sharp left hand turn and you pass the start/finish area. 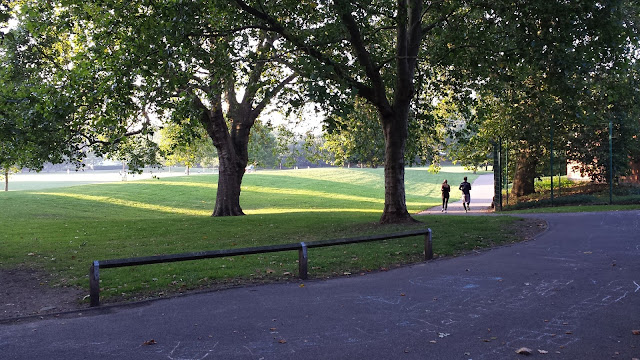 The course is completely flat except for the little dip near the sports centre and is entirely on beautifully smooth tarmac except for the finish funnel which is on the grass - the official course map suggests that you run on the grass at the back end of the course, but you don't. Road shoes are the order of the day and buggy runners will be as happy as a very happy thing. I'm going to come back with the running buggy to attempt a new buggy running personal best. 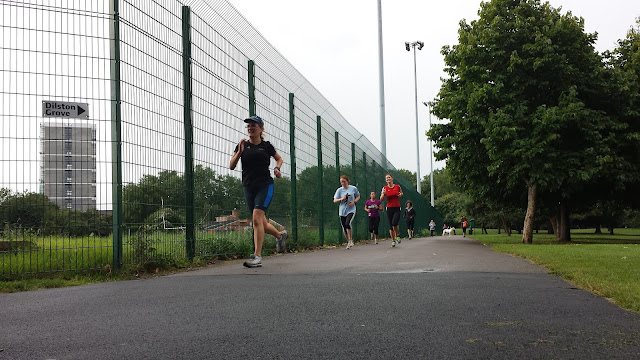 I had tried to convince a few family members to come along to the inaugural run but in the end they decided to have a lie-in (sad face). My wife and daughter volunteered as marshals and looked after the corner in between the playground and pond - despite being a tad chilly they really enjoyed themselves. I'm hoping to make this venue one of my regulars once I take my foot off the tour pedal a little, especially on those occasions when I fancy a good ol' time trial. 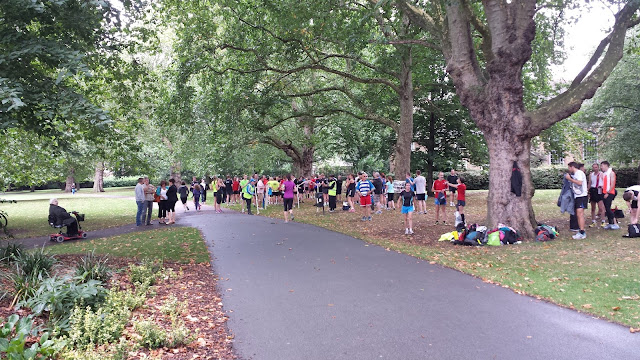 After the run the attention turns to the cafe (and it is a cafe, not a café), the staff were a little shocked to have so many people turn up at once after the run. After a lot of frantic action behind the counter all the parkrunners got their fix of tea or coffee. The cafe only has one table inside so over the winter it might be worth considering the Surrey Docks Tavern as a warmer alternative. 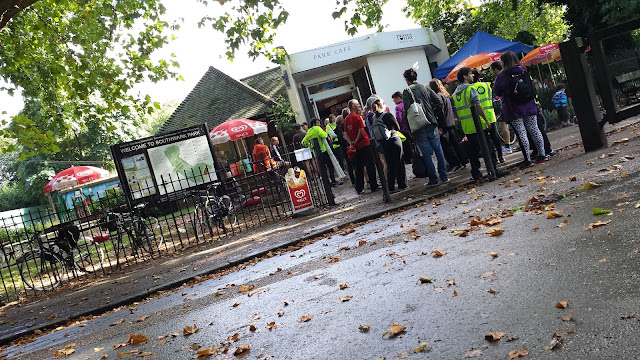 Of course it's easy for me to look at the park through rose tinted spectacles - It wasn't easy growing up in inner London and not every experience I've had in the park has been good, especially throughout my teenage years. Still, the park seems to be on the right track these days but there are still some strange people around (as witnessed by myself and Danny Norman during our warmup/recce lap before the run). 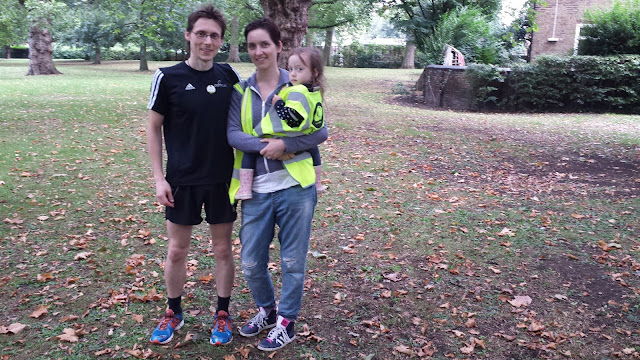 Certain parts of Bermondsey are fairly up and coming and are now seen as pretty desirable places to live, but what mustn't be forgotten here is that the long term residents are the heart and soul of Bermondsey and are notoriously passionate and proud of their area of London. If this passion can be harnessed by the parkrun this will be a truly great community event.
Update 2022: I visited again in 2022 and the following things can be noted.
The course is essentially the same but the start and finish points have been slightly adjusted, plus there has been a minor alteration to one of the corners where you take the longer way around on the first lap (same as the original) but the shorter curve on laps 2 and 3. There is now a new cafe next to the lake (next to finish). The cafe building has toilets which officially open from 9am, however on this visit they were open before 8.30am (if closed head to Seven Islands Leisure Centre). The old cafe (pictured above) is now closed.
The number of participants has risen and seems to be somewhere in the region of 350 per week - this does make the first lap very congested, but the sight of all the people running/walking around is amazing. There were lots of other park users on the paths including a fair number of cyclists, so be aware of this. Also you can park within the park on the road that separates the two halves for up to four hours (access from Southwark Park Road and there is no charge, but you must be within the marked bays). There are now bicycle racks opposite the toilets.
Please find the GPS data and a course fly-by from event 374 which took place on 28 May 2022 below.
My GPS data on Strava
The Relive course fly-by video