Brighton is a seaside town and half of what is now the city of Brighton and Hove, in the county of East Sussex. Over the years it has been known by over 40 different variants of the name, and was recorded as Brighthelmstone in the Domesday book. The city and its outlying areas have a population of just under half-a-million people.

Most of the landmarks, quirky features and diverse communities in Brighton are well-known so I will not linger on those. Instead I'll head over to the east of Brighton to a suburb called Whitehawk. This part of Brighton is where the town's first settlement 'Whitehawk Camp', dating back to around 2700BC, was located. 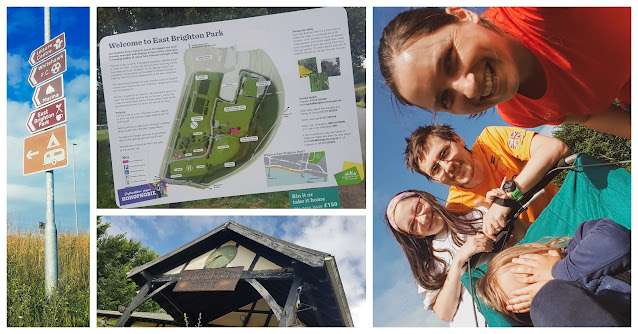 The modern-day residential area of Whitehawk was developed from about 1933 with further expansions and remodelling work carried out in the 1960's, 70's and 80's. To the east of the residential area you will find Sheepcote Valley along with East Brighton Park which, as of 8 December 2018, is home to East Brighton parkrun. This made it the fifth parkrun within the city.

The park covers an area of 60 acres and facilities include a play area, various sports pitches, café, and nature walks which can be extended by venturing onwards into Sheepcote Valley itself. It also features a new woodland plantation and one of the largest municipal bulb displays in the country - this consists of 420,000 bulbs which flower each year between February and May.
The park also serves as a landing spot for helicopters, this is primarily used by the emergency services when transferring patients to the nearby Royal Sussex County Hospital. The landing zone is actually right in the middle of the parkrun course, so if one needs to land during a parkrun, that event will be immediately stopped and cancelled. At the time of writing, this has only happened once, but it's worth keeping it in mind.

We visited the park on 31 July 2021 to take part in East Brighton parkrun's 67th event. There is a fairly small on-site car park which is a pay-and-display. However, it transpires that there is currently no charge on Saturday mornings - the charge only applies from 2pm on Saturdays. It can be accessed via the road that enters the park from Wilson Avenue. For the record, the car park also has some bicycle racks. The road also provides access to Whitehawk FC, whose ground is in the park, and to Brighton Caravan and Motorhome Club.

There is an onsite toilet which is located within the East Brighton Cafe building, also known as the pavillion. This is just inside the car park, and right next to the parkrun start-finish area. The toilets were extremely dated and there was no soap in the gents, but they were a welcome sight after our drive down from Dartford.
For visitors travelling on public transport, the nearest train station is Brighton and I hear a number 7 bus will help to complete the journey. If you choose to use your feet instead, it's two-and-a-half miles from the station to the park. After looking at the park on Google maps, I had expected it to be a little rough around the edges just like any regular inner city park, however, when I arrived, I was pleasantly surprised by the lush green landscape laid out before me.
After a very informative first-timers briefing, the regular full briefing takes place at the start line. Then at 9am, the participants are set off to run, jog or walk the 5km route. Underfoot is 100% grass, and when I visited in the summer, it was gloriously lush. I was fine in standard road shoes, but I suspect it's a little muddier during the winter and you may benefit from an off-road style shoe if taking part at that time of year. The venue currently has an average participant number of 77.1.
The course profile is largely flat, but has a slight elevation change and a couple of short, sharp inclines/declines. This particular venue has an interesting and unique configuration - it is set over three laps of the cricket and football fields but each lap is very slightly different. The EBp team have produced a really good course map which you can see above, the exact positioning of the start and finish on the day that I visited was in a slightly different position, but the rest of the course was essentially the same.
Each lap opens with a loop of the cricket pitch, which has a distinctive feature in that it has tiered banks around the edge (presumably for spectators). On each lap, you navigate a different one of these tiers, starting with the outer one and working your way inwards as you start each new lap.
The second section of the lap features the football pitches. This part also has a tiered section which serves as an out-and-back before descending down to the pitches themselves for a large loop and finally heading back around the the start-finish area. I think it is worth mentioning that sadly there was a lot of dog mess throughout the route (more than I've seen for a very long time in a park), which was a shame.
With the three-laps complete, the finish can be found in the same vicinity as the start and barcodes are then scanned. As I mentioned before, the cafe/pavilion is right next to the start-finish line, so post-event refreshments can be had right there at the finish, which is of course a really nice feature to have. Once we were properly refreshed, we headed over to check out the playground, which was nice but surprisingly quiet for a sunny Saturday in July.
The results for event 67 had been processed and our text messages arrived while we were still in the park. Shortly after, we decided to head off home - we'd had a brilliant morning out in East Brighton Park. Many thanks to all the volunteers.
I recorded the course data using my Garmin and you can view that on Strava. You can also see a Relive video of the course which I've uploaded to YouTube.
Related links:
My blogs from the full set of Brighton and Hove parkrun venues:

Also, the full list of Sussex parkrun venues can be found here:

The Sussex parkrun venues
Posted by copy7t at 21:37