Chalkwell is a ward within the town of Westcliff-On-Sea and also a suburb of the unitary authority of Southend-On-Sea, in Essex. Southend-On-Sea as a whole has a population of around 183,000 people and 10,000 of these reside within Chalkwell itself.
The name Chalkwell is taken from the Chalkwell Hall Estate which was the centre point of the farmland which covered the area until it was developed for housing in the early 20th century. The current Chalkwell Hall, built in 1830, sits in the centre of Chalkwell Park. 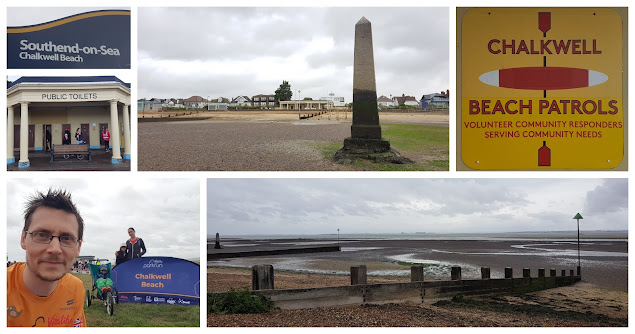 Usually at this point in a blog I would go into more detail about the park, however, we were not in Chalkwell for the park, we were here for its seafront. The seafront and stony-sandy beach at Chalkwell is nestled alongside its more well-known neighbours of Leigh-on-Sea, Westcliff-On-Sea and of course, the one and only, Southend-On-Sea.
We visited to take part in Chalkwell Beach parkrun and had travelled by car. There are a couple of options for parkring. Firstly, right next to the start-finish area are 120 parking spaces which stretch along the seafront area - the main method of payment is via the Mobon app, but I hear that there are machines that accept cash. If you don't mind being further away from the start area (and want to save a couple of pounds), there are various residential side streets where you can park for free - to use these you will need to park about 1km away, essentially you're looking to aim for the roads north of the train line in the vicinity of Chalkwell Park. 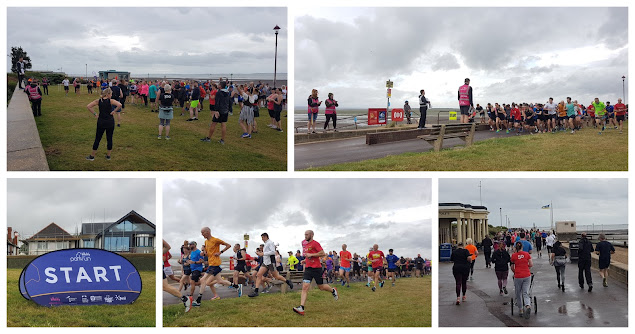 If you were to travel by train, Chalkwell Train Station sits right on the seafront, about 500m to the west of parkrun start area. Toilets can be found right next to the start. The course here is a straight-forward single out-and-back along the seafront path - underfoot is tarmac and the profile is totally flat. As noted on the official course page, part of the course does have a camber, but fortunately it doesn't last for too long.
Interestingly, only the first and last couple of hundred metres of the course take place alongside Chalkwell Beach, the remainder of the course goes through Westcliff-On-Sea and then the western end of Southend-On-Sea. The out-and-back itself is straightforward with no chance of taking a wrong turn. The participants need to stick to their left-hand-side as they progress around the course. 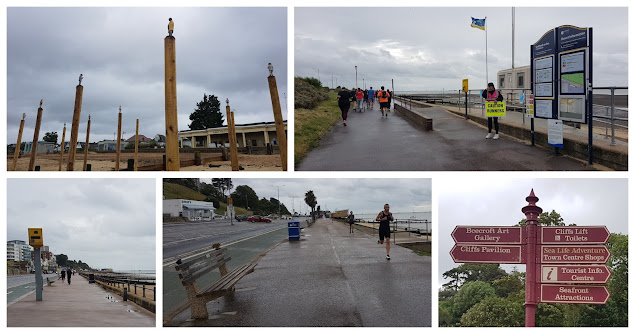 There are lots of items of street furniture all along the seafront (benches, bins, speed cameras, etc) and the course is not particularly wide, so it's worth keeping them in mind as it'd be fairly easy to accidentally collide with one. You'll find the reassuring sight of parkrun marshals at various points along the seafront. Also bear in mind that, as is normal for seafront courses, it can suffer from stronger winds than you may usually find in-land.
You pass a few interesting sights and landmarks along the way. First is the stone pillar out on the mud-flats near the start. This is the Crowstone and it marks the historic eastern boundary of the Port of London Authority's jurisdiction in the Thames Estuary. When we visited there was an art installation on the beach called 'Waiting for Climate' consisting of 15 pillars topped with small characters which symbolise our passive relationship with climate change. It is due to be in place until 30 September 2021. 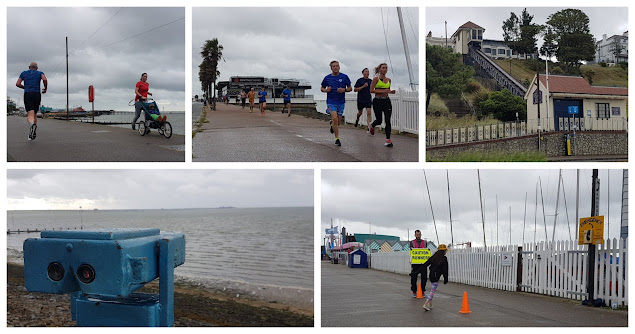 Once in Westcliff, the course passes a seafront casino. In 2009 this became the very first casino in the UK to be granted a wedding licence - it's unconfirmed, but possible, that it was actually the first casino in the world to host a wedding. You'll also see The Cliffs Pavilion up on the cliffs facing the estuary, this is one of two theatres in Westcliff-On-Sea and is most famous for hosting a 'secret' Paul McCartney unplugged show in 1991.
In the distance as you look out along the estuary you can see Southend Pier which is a grade II listed building, and at 2.14km is the longest pleasure pier in the world. And then just as the course reaches the turnaround point, you can see the Southend Cliff Lift - a funicular railway which was constructed in 1912. 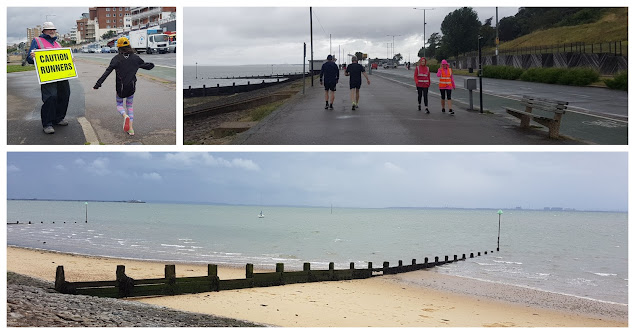 The return leg passes all the same points of interest all the way back to Chalkwell Beach where the finish line can be found on the grass right next to the original start point. Barcode scanning quite conveniently takes place right there on the grass, and there are a couple of cafes on hand to provide some well earned post-event refreshments.
Once we were nicely refreshed, we explored the beach a little more, but then the torrential rain came and we were drenched while making our way back to the car. A short while later our results messages came through and we saw that there were 193 finishers at event 6. If you'd like to see the GPS data for the course, you can see mine here: Strava: Chalkwell Beach parkrun. Also you can see the Relive course fly-by video, here: Course fly-by video. 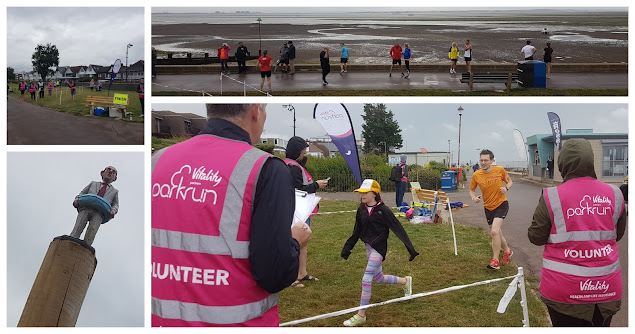 Even with the dodgy weather, it had been a lovely morning out and the volunteers all around the course had really made us feel welcome. Thank you.
Related:
The Essex parkrun venues
Posted by copy7t at 11:23